Editor’s note: Ahead of Monday’s presidential debate between President Obama and GOP nominee Mitt Romney, we thought it would be fun to get some pointers from two pros. Meet Georgetown University juniors Andrew Markoff and Andrew Arsht. The pair captured the National Debate Tournament championship at Emory University April 3. They have agreed to share the secret sauce to their debating style with five tips. Ready President Obama and Gov. Romney? 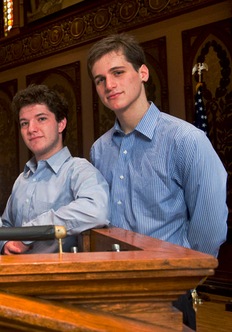 DO speak to your audience: Effective communication is all about the human element. Voters want candidates to talk to them. Even though a debate is an exchange between two candidates, neither is trying to convince the other that he is correct. In a question and answer format, the candidate should be “I,” the American people should be “you,” and the other candidate should always be referenced in the third person. The president and the former Massachusetts governor have employed this technique to date, but occasionally slip up.

DON’T address your opponent: During the town hall debate at Hofstra on Oct. 11, both Obama and Romney spent too much time facing each other and addressing each other to the exclusion of the audience.

DO practice: Obama and Romney have lots of experience addressing specific constituencies. But in a Presidential debate, they have to speak to many audiences at once. On top of that, the candidates have the tough task of communicating complicated policy platforms in a series of effective sound bites. The key is practice. By effectively predicting what the other candidate in going to say, the president and the former governor can avoid costly gaffes and irretraceable missteps.

DON’T get stuck on the script: On the other hand, running through a series of prepared scripts often results in a stale performance and fails to address the precise questions being asked. The goal should be to weave specific questions into the broader issues of the campaign.

DO stress facts: Facts matter in presidential debates. Monday night, Obama and Romney will seek to capitalize on a host of credible statistics that cast their position in a favorable light. At the same time, voters will be looking for clear, convincing, emotive positions they can latch onto. By stressing numbers to the exclusion of argument, both candidates risk abstracting the key differences between the campaigns and losing viewers in the technical back and forth.

DON’T get caught up in the numbers: Each statistic should serve a clear purpose and be paired with a lucid description of the candidate’s position on the issue at hand.

DO look engaged: Movement and body language matter. Although this debate will not allow the candidates to control the space like they did in the town hall format, engaged facial expressions and gestures add force to an argument.

DON’T overdo it: Obama was weakest at Hofstra when he slouched over his chair and had a bored expression. Looking engaged is the key to avoiding charges of being “passive.” Of course, overdoing it looks silly and should always be avoided.

AND REMEMBER, one question at a time: This is our guiding principle when we debate. Nothing is more important when the pressure is on. Focus on the task at hand: hitting the current issue out of the park. The rest will follow.

Andrew Markoff is a junior studying international history at Georgetown University. He was born and raised in New York City.

Andrew Arsht is a junior studying theology at Georgetown University. He was born in Pennsylvania, but has been a proud resident of the state of Utah for many years.