How Trump addresses violence at his rallies

To Rakeem Jones, flanked on all sides by uniformed sheriff’s deputies, it was more than just the shock of being ejected from a political rally for Donald Trump. The black man felt as if he was being transported back in time.

“It’s not the America they portray on TV,” the 26-year-old said, the day after he was wrestled to the ground by officers and punched in the face during the campaign event in Fayetteville, North Carolina.

But to friend Ronnie Rouse, who caught the incident on video, it was “totally American.”

What should we make of scenes like this Wednesday evening at Crown Coliseum?

They have become a regular thing at Trump rallies, and while security experts say Trump has every right to quash dissent at events he’s paying for, they say the Republican front-runner is playing with fire by not tamping down uncivil behavior and assault.

“I would go so far as to say that I find that abhorrent,” security consultant Stan Kephart, a former police chief in Arizona and California, said of Trump’s failure to call out his pugnacious followers. “To me, he’s pressing the line. He’s doing things that you would see a showman do.”

A North Carolina man says he and his friends were thrown out of a Donald Trump rally Wednesday after one of his friends was punched by another man attending the event. Video by Associated Press

What’s Trump’s attitude about all of this?

He once said he’d like to personally punch a protester in the face, and has pledged to pay his supporters’ legal bills if they get in trouble.

He’s spoken fondly of the “good old days” when police could rough protesters up without fear of backlash. “But today,” he said Wednesday in Fayetteville, “they walk in and they put their hand up and they put the wrong finger in the air … and they get away with murder. Because we’ve become weak.”

During Thursday night’s debate in Miami, Trump said some of the protesters at his rallies “are bad dudes and have done bad things.” But he said he hopes he hasn’t played a role in inciting the violence with some of his provocative language. 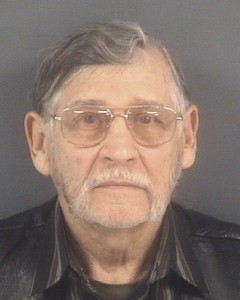 Rouse said his group was reacting to an insult against one of their party when they were suddenly swarmed by officers, and Jones was thrown to the floor. As he was being led away, Jones said he could hear Trump shouting, “Go home to your mama.” Jones’ mother died eight years ago.

Jones said the man who hit him was allowed to stay, but on Thursday, the Cumberland County Sheriff’s Department charged John Franklin McGraw of Linden, North Carolina, with assault and disorderly conduct.

The role of law enforcement in these situations is not simple.

“We respect folks’ First Amendment rights to free speech. We’re not there to police the protesters,” said Robert K. Hoback, a spokesman for the Secret Service, commenting on reports that Secret Service agents escorted protesters out of a recent Trump event in Georgia. He said they only act on threats to the “protectee.”

Crowd control expert Paul Wertheimer, who has been keeping track of Trump events, said he hasn’t seen any instances where law enforcement or private security have overstepped. But he thinks the candidate should show more tolerance for protest.

“I think he, in general, knows what he’s doing, and he does this intentionally to stir up the crowd,” said Wertheimer, head of Los Angeles-based Crowd Management Strategies. But he said the candidate is taking a risk.

“I think things can quickly get out of control if he continues to act this way,” said Wertheimer, who’s consulted with authorities in Ferguson, Missouri, Baltimore and other recent hot spots. “The man or woman on the stage with the mic has a lot of power — to calm things down or to provoke confrontations, to inspire or to create an atmosphere of intolerance.”

Kephart, the ex-police chief, agrees that Trump should be a little more willing to take the boos and heckling. What he shouldn’t tolerate, he said, is violence.

“If you don’t say anything, you’re assenting to it. You’re saying it’s OK.” he said.

In an email about the North Carolina incident and arrest, Trump spokeswoman Hope Hicks said Thursday, “We are not involved.”

Whether someone’s rights are being trampled depends on the venue, be it public or private, said Ken Paulson, president of the First Amendment Center at the Newseum in Washington.

“Basically, you always have to remember that the First Amendment says, ‘Congress shall make no law.’ It doesn’t say, ‘Trump shall make no rules in a private setting,'” Paulsen said.

But a public place doesn’t become “a private country club,” he added, “just because somebody writes a big check.”

Left: Rakeem Jones lies on the ground while being removed by deputies from a Donald Trump rally in Fayetteville, North Carolina, in a still image from video provided by Ronnie Rouse. Jones was assaulted during his eviction from the rally, and John Franklin McGraw, of Linden, North Carolina, faces criminal charges in the altercation. Photo provided by Ronnie Rouse/Handout via Reuters