How Trump is trying to shift the shutdown debate

President Donald Trump used his first primetime address from the Oval Office to make the case for building a border wall, refusing to back down from an issue that drove his 2016 campaign and led to the current government shutdown.

But after the brief speech, in which he repeated his more than $5 billion request for a border wall, the political dynamics around the shutdown fight remained largely unchanged.

House Speaker Nancy Pelosi and Senate Minority Leader Chuck Schumer dismissed Trump’s appeal in a televised rebuttal, and urged him to sign legislation to reopen the government. A growing number of moderate Republican lawmakers also want the crisis to end, a shift from the first days of the shutdown that has increased pressure on Trump to back down.

But outside Washington, the border wall and Trump’s border immigration policies remain largely popular with his core supporters, a group he will need to energize in order to win re-election.

Sean Spicer, who served as Trump’s first White House press secretary, said the conventional wisdom that Trump can’t win in 2020 without reaching beyond his base ignores the lessons from the past several presidential races — that appealing to the base wins elections.

After the speech, the political dynamics around the shutdown fight remained largely unchanged.

“Since 2000 we haven’t had an expand-the-base election,” said Spicer, now a senior adviser at the pro-Trump super PAC America First Action. Successful presidential campaigns now rely on turning out the party’s base, Spicer argued, and from that perspective staging a shutdown over border security could be viewed as a worthwhile political risk. “Going into the next election, it’s good politics,” he said.

“It’s clear that the president wants to run for re-election with the argument of promises made, promises kept,” said Michael Steel, who served as a senior aide to former House Speaker John Boehner, Paul Ryan and other Republican leaders. “His biggest unfulfilled promise” from the 2016 campaign, Steel said, “is the promise to build the wall, and that’s why this is a particularly intractable fight.”

Trump’s refusal to back down from his demands for the border wall, in an abrupt move that led to a government shutdown just days before Christmas, infuriated Democratic lawmakers and caught members of his own party by surprise. The decision was followed by weeks of negotiations between the White House, Republicans and Democrats that have so far showed little progress.

In public and in private in recent days, Republicans have increasingly worried about how Trump can find his way out of the shutdown. Polls released this week show that a growing number of voters blame Trump for the shutdown, and a majority don’t support his position on the border wall.

Ahead of his Oval Office address, the president had said he was considering declaring a national emergency, which could have allowed him to bypass Congress and fund the border wall. But the move would have sparked several legal challenges, and advisers in the White House were reportedly divided about whether to take that step.

By choosing not to, Trump may have limited his options for striking a deal that he can claim as a victory. Several Republicans said they now think the president’s best hope is to agree to some version of the offer put forth by House Democrats last month, before the shutdown began. That plan included $1.3 billion for border security, though it stipulated that the funding could not be used for a wall. 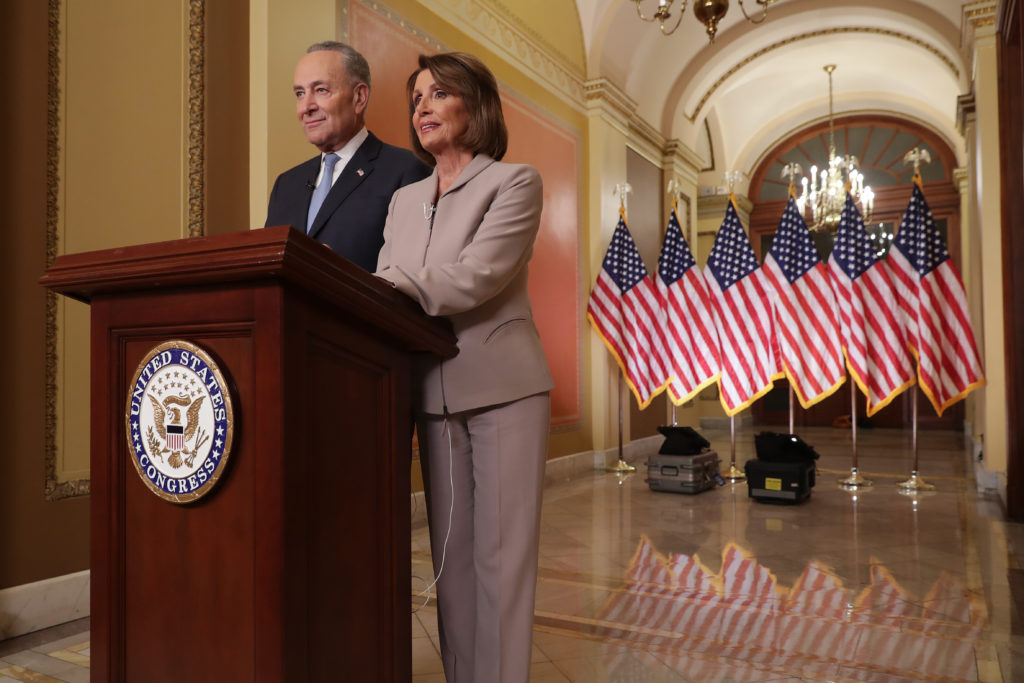 “I do think that this is a winning issue” for Trump, said Matt Mackowiak, a Republican strategist. “But I don’t think the White House has done a good job of making the case that the border wall is necessary, that it’s a national security issue, and that it’s a crisis on the border.”

Trump attempted to bolster his case Tuesday, in part by using the backdrop of the Oval Office to lend his position more gravitas. But the short address did not offer new points from the ones Trump has been making about illegal immigration for the past several years, and the speech included misleading claims about drugs and crime that aren’t supported by government data.

“Democrats are frustrated with Trump and are not inclined to give in to the false narratives he’s creating about the crisis at the border,” said Geoff Garin, a longtime Democratic pollster.

Trump is scheduled to meet Wednesday with congressional leaders at the White House before traveling to the Texas border Thursday to continue pressing his case for a wall and other steps to curb illegal immigration. Republicans said they expected him to double down on his position, as he waits to see if the Oval Office speech and the border trip change public opinion about the shutdown.

The shutdown has impacted roughly 800,000 government workers, many of whom have been furloughed or are working without pay, and government services have been cut back as well. Trump spent little time discussing those impacts in his address Tuesday, focusing instead on the stories of Americans who have been killed by migrants living in the country illegally.

As the impasse drags on, Republicans said they feared the shutdown would hurt the party, even if it helps Trump with his base.

“If harder immigration policies appealed to a majority of the country, we would have held the House” in the 2018 midterms, said Mike Murphy, a Republican consultant. “We just did a science test on the Trump issue set and we got clobbered.”

The president “should have cut his losses and never done this,” Murphy added. “I don’t know how he gets out of this.”

Left: President Donald Trump delivers a televised address to the nation from his desk in the Oval Office, about immigration and the southern U.S. border on January 8, 2019. REUTERS/Joshua Roberts