Hundreds of ‘I Voted’ stickers left at Susan B. Anthony’s grave

Visitors flocked to Anthony’s grave in Mount Hope Cemetery in Rochester, New York, on Tuesday, leaving hundreds of “I Voted” stickers behind in a tribute to the women’s suffrage leader.

The cemetery extended its hours for visitors on Tuesday, opening early at 7:30 a.m. EST and closing at 9 p.m., when polls were set to close in New York. Some visitors waited for 90 minutes to see the grave of Anthony, who illegally cast a ballot in the 1872 presidential election in Rochester and who faced a subsequent criminal trial.

Along with Elizabeth Cady Stanton, Anthony founded the National Woman Suffrage Association in 1869 and was a critical leader in the movement for women’s suffrage, but died 14 years before the 19th Amendment would give women the right to vote in 1920. 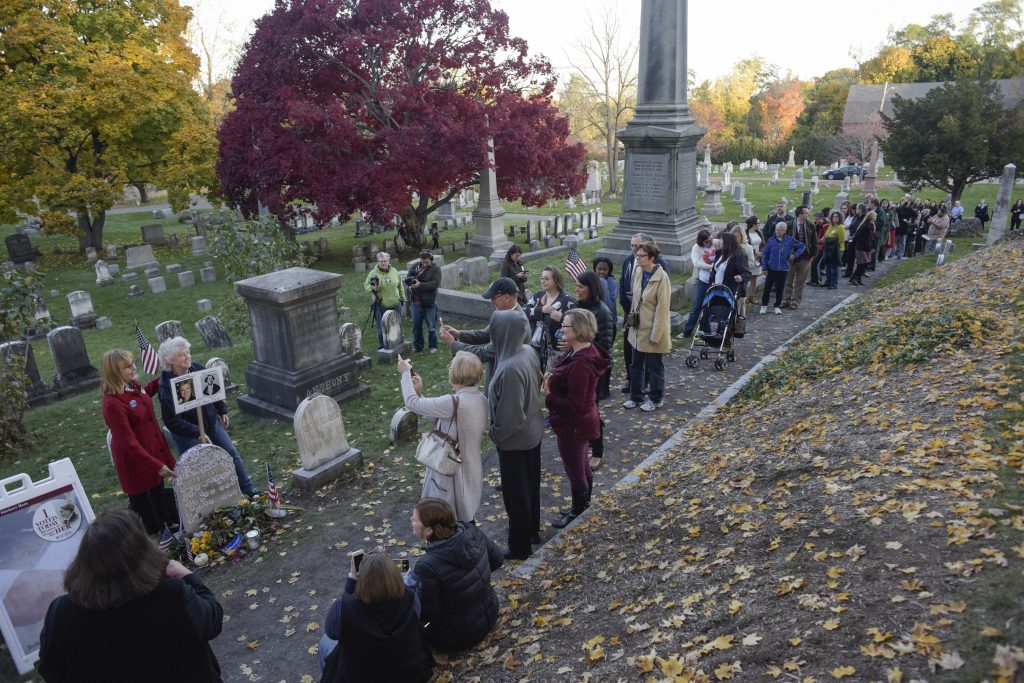 Anthony has been criticized for de-emphasizing the rights of black people in the fight for suffrage, especially as black suffragettes like Ida B. Wells and Sojourner Truth played vital roles in that fight.

You want to celebrate some women who fought for ALL of our right to VOTE – here are a few to start with https://t.co/oQF8oxj4aL pic.twitter.com/w3EyDRJdLH

Additionally, Anthony opposed the 15th Amendment, which gave black men the right to vote when it was adopted in 1870. At a meeting with abolitionist Frederick Douglass in 1866, she said, “I will cut off this right arm of mine before I will ever work or demand the ballot for the Negro and not the woman.”

Lovely Warren, the first female mayor of Rochester, visited the grave Tuesday. “I was elected 141 years to the day that Susan B. Anthony cast that illegal vote,” she told The New York Times.

Visitors posted photos and videos of the scene to social media.

Susan B Anthony's tombstone at 9:15. And the people keep coming. #Vote2016 pic.twitter.com/zBG22YymHe

The scene at Susan B. Anthony's grave. And it's a scene. pic.twitter.com/mgQNwmsB9f

Left: The grave of women's suffrage leader Susan B. Anthony is covered with "I Voted" stickers left by voters in the U.S. presidential election, at Mount Hope Cemetery in Rochester, New York November 8, 2016. REUTERS/Adam Fenster