ASHLAND, Va. — There’s a reason immigration reform has not moved its way through the U.S. House of Representatives. And it can be found in places like this, a strawberry festival just north of Richmond.

Brat, who showed up when the gates opened here to shake the hand of every person he encountered, is considered a long shot Tuesday in the primary for Virginia’s 7th Congressional District. Cantor’s campaign released an internal poll showing the congressman up 34 points. But the threat Brat has posed — along with the endorsements he’s received from prominent national talk-radio hosts — has forced Cantor to look over his right shoulder. He’s had to work and spend money.

Brat is indicative of the challenge House Republicans are facing across the country. If a Republican member shows any kind of openness to immigration reform measures, no matter how small, they have to worry more about a potential primary challenger than losing in a general election to a Democrat. That’s due in part to how districts have been redrawn, creating fewer competitive House races than in years past. 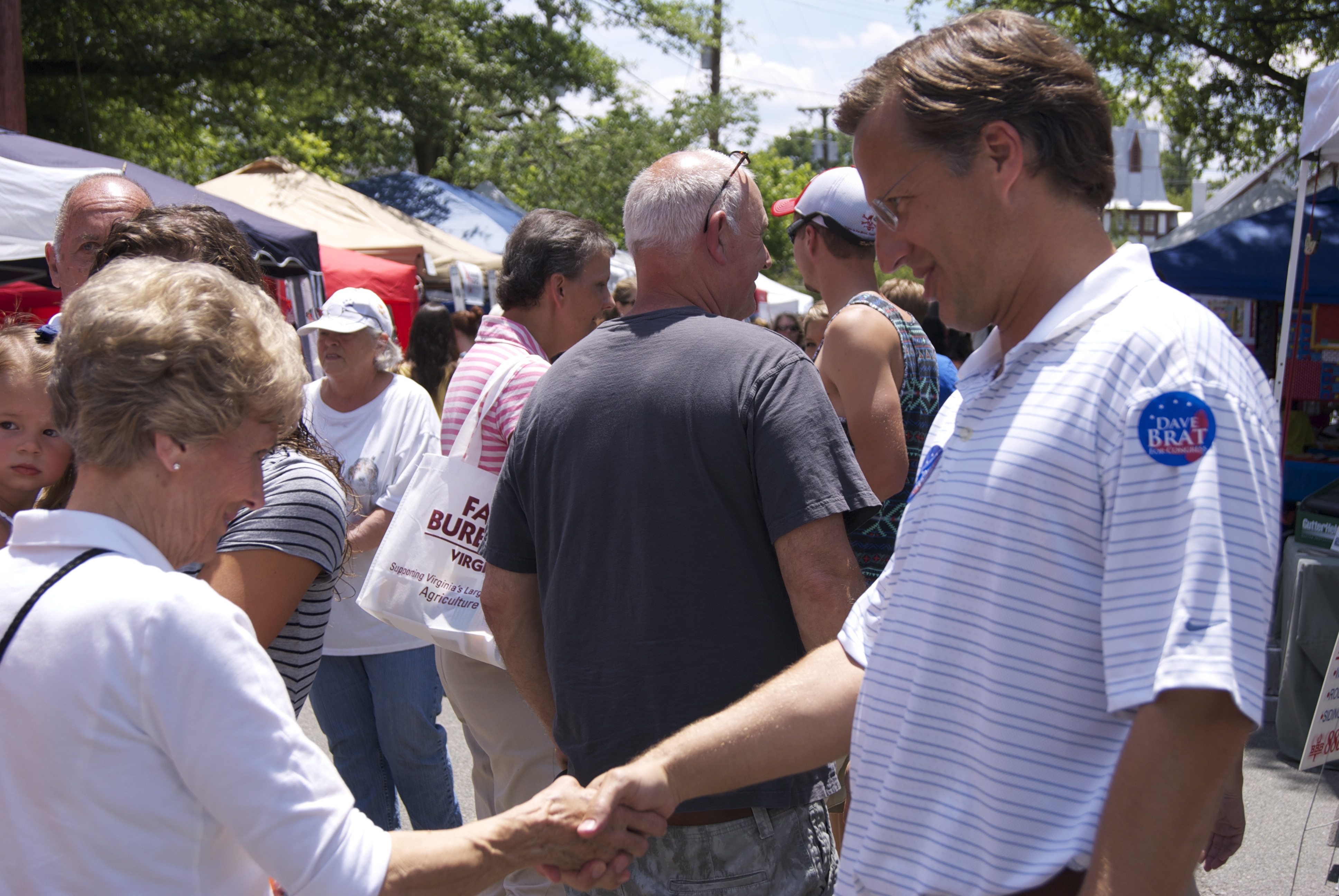 Dave Brat made sure to shake hands with everyone that walked by him at the Ashland Strawberry Faire. Photo by Rachel Wellford

To Brat, that’s being in support of “amnesty.” Cantor, who breezed through the sun-drenched festival five hours after Brat had arrived — and by that time, they were out of berries — disputes Brat’s characterization.

“My position on immigration has never wavered,” Cantor told the Richmond Times Dispatch. Cantor has voted multiple times to heighten border security and has opposed immigration reform measures like the DREAM Act.

“I oppose Senate Democrats’ comprehensive bill that offered blanket amnesty, and refuse to allow it a vote in the House,” he continued, adding, “We all know that our immigration system is broken, and we should make reforms in a step-by-step approach. We should be able to find common ground when it comes to securing the border and addressing children who did not break any laws and were brought here at no fault of their own and know no other country as home.”

Advocates argue the Senate bill was not “blanket amnesty,” because it took about 13 years with a fine, a clean criminal record and going to the back of the line to qualify for citizenship. Still, a path to citizenship has been a non-starter in the House.

President Obama has indicated an openness to work on piecemeal measures, as House Republicans like Speaker John Boehner and Cantor have wanted. But Boehner continues to say that a lack of “trust” among those in his conference in the president is preventing action on immigration. 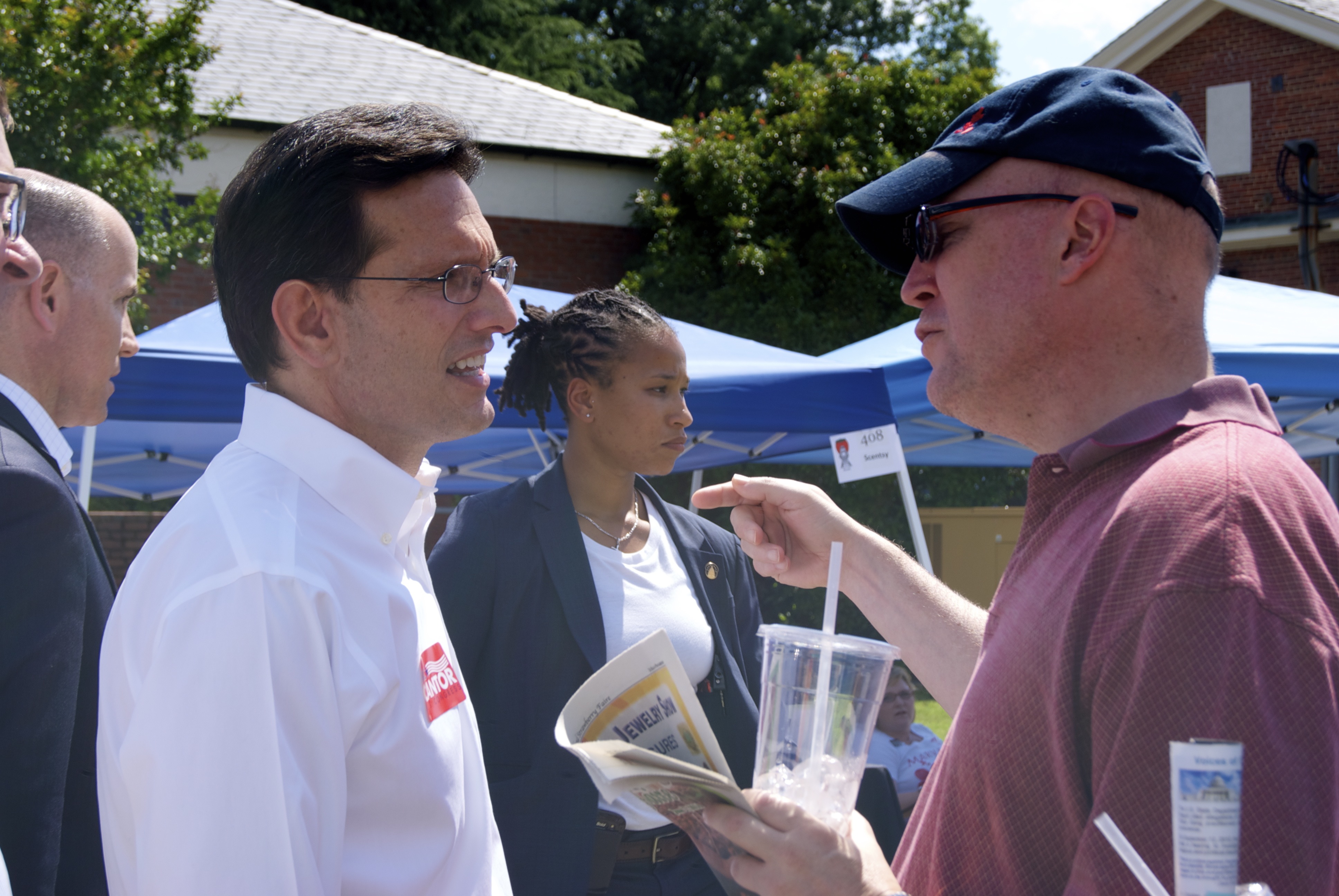 “The problem is that the guy’s been talking out of both sides of his mouth,” said Frank Sharry, executive director for one of the leading immigration advocacy groups, America’s Voice, about Cantor. “On one hand, he has been saying for over a year that the Republicans have to do something on immigration reform — and then Brat emerges and decides to make immigration the dividing issue of the primary.”

Using immigration as a motivator, Brat, who has campaigned to be Cantor’s “term limit”, has gained tea party support and even picked off some former Cantor backers.

Ron Hedlund, who owns a small industrial repair business in Richmond, is a former volunteer for Cantor, but said he can no longer back his congressman.

“[Cantor’s] interests have turned toward large corporations, and he’s not looking out for my interests,” Hedlund said at the strawberry festival, as locals waded through stands filled with homemade goods and food trucks serving everything from barbecue to strawberry shortcake. “That’s why I have changed, and now I’m supporting Dave Brat.”

Brat has also picked up support from some local Republican groups. At the district’s GOP convention in May, for example, Brat topped Cantor by more than 40 points in the straw poll.

Despite some of those grassroots gains, Brat faces the reality of two major roadblocks: experience and money.

In 2012, Cantor won the Republican primary with 79 percent of the vote. He has been the House majority leader since 2011, and has served in the Republican leadership since 2003.

“He has great experience and leadership,” said Chris Erb, a supporter of Eric Cantor’s at the festival. “I think that he is obviously well above the competition as far as experience level.”

A Cantor aide told the NewsHour that although they are confident about winning reelection, “we are taking the election seriously,” adding that they have never taken an election lightly.

By the end of April, Cantor began to put out multiple television ads and a series of mailers attacking Brat. In fact, the campaign tried to label him a “liberal college professor”, who supported tax increases proposed by former Democratic Gov. Tim Kaine.

Brat rejects that depiction, but feels that all of the negative campaigning is a sign of something good.

“They know it’s a horse race,” Brat said. “It’s going to be neck and neck, and I think we’re going to win it.”