Immigration policy, Trump’s signature issue, may be his greatest test

Donald Trump’s immigration speech on Wednesday night won’t be his first “major” policy speech this election. He has given carefully orchestrated speeches in recent months on issues like foreign policy and the economy, but these included few concrete proposals. Trump promised to provide details later on, but hasn’t yet.

But Wednesday’s speech in Arizona could, potentially, be different. Trump is under immense pressure to clarify his position on illegal immigration after saying last week that he was “softening” his hard-line stance from the primaries.

READ MORE: The Trump campaign has a ground-game problem

Trump raised the stakes even further by staging a surprise trip to Mexico City today to meet with Mexican President Enrique Peña Nieto, who has said there is “no way” the country would pay for Trump’s proposed wall along the U.S. border. Their meeting was scheduled to take place early this afternoon. 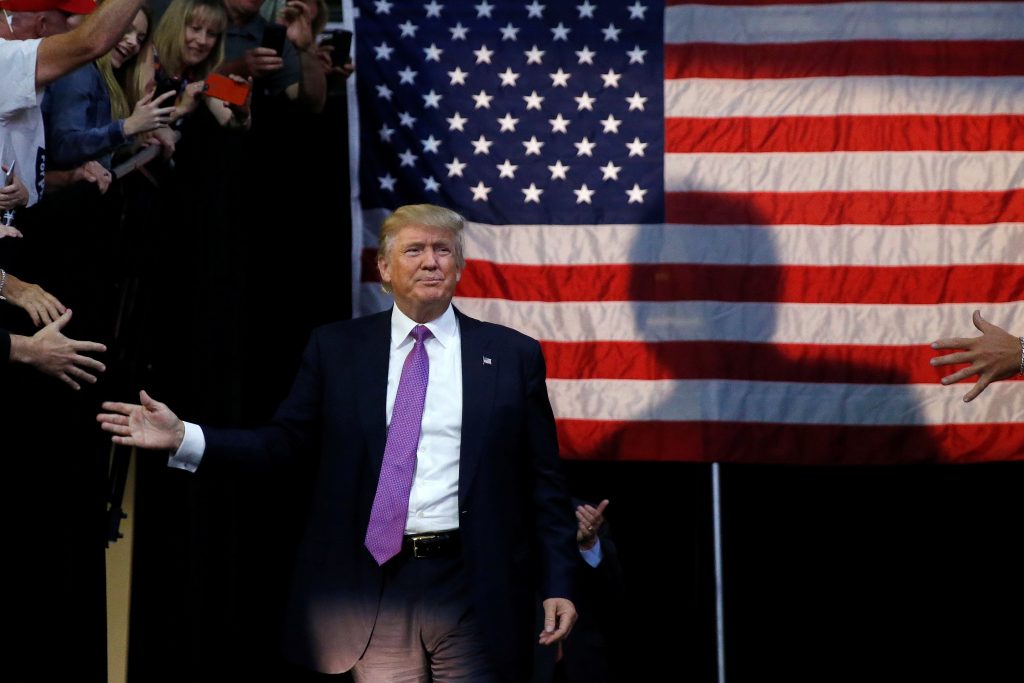 Republican presidential nominee Donald Trump is under immense pressure to clarify his position on illegal immigration. Photo by REUTERS/Carlo Allegri

The brief Mexico trip underscores Trump’s struggle to move toward the middle in the general election without abandoning the harsh rhetoric that helped him win the Republican presidential nomination.

During the primaries, Trump promised to create a “deportation force” to remove all of the country’s 11 million undocumented immigrants.

Last week, however, he appeared to reverse positions, saying he would consider allowing some undocumented workers to remain in the country, so long as they paid back taxes. “There’s no amnesty, as such, but we work with them,” Trump told Fox News.

The comments angered many of Trump’s supporters on the right, who said he abandoned a core conservative principle. Trump’s apparent reversal and subsequent efforts to walk back the shift also drew derision from critics on the left who painted him as a flip-flopper on the main theme of his campaign.

The attacks from all sides have put Trump in a bind. Ahead of the speech, his supporters argued that Trump would benefit from outlining his immigration plan in full.

Trump will likely provide more “specifics” on his proposals to build a wall along the U.S.-Mexico border and crack down on illegal immigration, said Kansas Secretary of State Kris Kobach, who has discussed immigration policy with Trump. Kobach said earlier this year that he helped develop Trump’s border wall plan.

“I’m expecting the same principles that we’ve heard all along during the campaign,” Kobach said.

But others said that dissecting the nuances of Trump’s immigration plan was almost beside the point.

“He’s never really been about the words, he’s always been about an ability to tap into anger,” said James Zogby, the president of the Arab American Institute. “He’s the first guy to have understood that people don’t care about policy.”

Shadi Hamid, a senior fellow at the Brookings Institution, said Trump’s views on immigration from Central and South America mirror his approach to immigrants fleeing Syria and other parts of the Middle East.

“Talking about Syrian refugees is a stand in for expressions of anti-Muslim bigotry,” said Hamid, the author of “Islamic Exceptionalism: How the Struggle Over Islam is Reshaping the World.” “So I don’t think it matters what the details are about how many refugees he would let in or not let in.”

Putting policy aside, the politics will be tricky for Trump to navigate tonight. If he gives up the “softer” approach and doubles down on his earlier vow to try and deport all of the country’s illegal immigrants, the GOP’s conservative base will be thrilled.

But it could further alienate moderate Republicans and Democrats who want him to move to the center. Trump needs those voters to beat Hillary Clinton in November; without them, his ceiling of support in national polls remains stuck around 40 percent.

Kobach played down those concerns, saying that Trump’s standing among independent voters would increase if he sticks to a conservative position on immigration.

“Politically the best move for him is to stay where he is, and that is advocate a really strong rule-of-law approach to immigration,” said Kobach.

“There may be some people who self-identify as Democrats who don’t like that approach, but at the end of the day, it brings him more votes than it loses him, especially among independents,” he added.

The alternative option is equally risky: If Trump sticks with his new, more moderate immigration plan, he could be in danger of losing key votes on the far right by appearing to embrace policies championed by the Obama administration, Democrats in Congress and several of Trump’s GOP primary opponents.

While a large portion of Trump’s base appears set to vote for him no matter what, there are many conservative voters who view any kind of immigration reform as a political non-starter.

The so-called “Gang of Eight” immigration reform bill that passed the Senate in 2013 included a pathway to citizenship for illegal immigrants who pay back taxes, undergo background checks, and take other steps to come out of the shadows. Trump endorsed several of those ideas last week, though he said under his new plan undocumented workers would not be eligible for full citizenship status.

“That is definitely what moderate Republicans have been saying” for several years, said Jacinta Ma, the policy director for the National Immigration Forum, a pro-immigration reform advocacy group.

It’s also unclear if a shift to the center will improve Trump’s standing with Hispanic voters this late in the election cycle.

There are 27.3 million eligible Hispanic voters in the country, and the vast majority have said in polls that they hold a negative view of Trump. Polls also consistently show Trump trailing Clinton among Hispanic voters by a wide margin.

“Certainly his supporters are strongly in support of many of the immigration policies Trump has talked about,” said Mark Hugo-Lopez, the director of Hispanic Research at the Pew Research Center. But “he’s always had a very unfavorable rating among Hispanics.”

“Without the details it’s really hard to say” what Trump believes, Ma said. “I’m hoping that he will clarify his position.”