Ray Suarez: Immigration Reform Takes a Number and Gets in Line 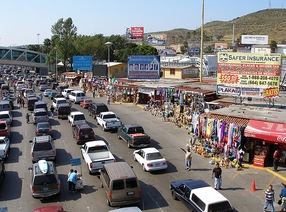 Advocates of immigration reform that would create a path to citizenship for millions of illegal immigrants in the U.S. were asked to be patient. After the Obama campaign promised comprehensive reform and won by a convincing margin, they were confident they had a friend in the White House who could deliver. But the economy and health care dominated the 2009 domestic agenda and with the 2010 mid-terms now looming on the horizon, immigration reform proposals threaten a rough summer for Democrats over an emotionally charged political issue.

During President Obama’s first year in office, groups such as the National Council of La Raza, a Latino civil rights organization, were told immigration reform would get its turn after health care reform was completed. Initially, you may remember, a completed health reform bill was predicted before 2009’s August congressional recess.

With the economy shedding jobs at a terrifying rate and foreclosures continuing apace, it was soon apparent health care reform proposals would not be ready by August.

Quietly, national groups were reassured by emissaries from the White House: they had not been forgotten. The Congressional Hispanic Caucus and national civil rights groups were asked for a little more patience and a little more time.

Health care reform was not only unfinished by Labor Day, but by Christmas, New Year’s, Groundhog Day, President’s Day and soon the Ides of March. The White House has not come up with an immigration reform proposal, and now House and Senate bills are starting to circulate.

The House bill, authored by Democratic Illinois Rep. Luis Gutierrez, touches on international security, law enforcement, education, and many other aspects of daily life in America. The Gutierrez bill seeks to reassure citizens who worry about border security and criminality among immigrants, while giving millions who have kept their noses clean, worked hard and started lives in this country, a path to legal status and eventually U.S. citizenship.

After years of interviewing people on all sides of the immigration question it looked like a comprehensive bill all right: the path to citizenship spelled out in the bill will infuriate those hostile to relatively open borders, and the security and law enforcement provisions will alienate those who want to find a way for millions who have remained in the U.S. illegally to gain citizenship.

Gutierrez, the Congressional Hispanic Caucus’ point man on immigration law for years, has clearly studied up on the opposition, and seeks to answer their critiques and anxieties one by one in his massive bill, while still making a way to regularize the status of people across the country, including thousands in his own Chicago district.

The bill also includes language contiguous with the Dream Act, drafted to allow undocumented young adults brought to the country as children to attend public colleges and universities at in-state tuition rates, and open qualification for scholarships for which they are currently ineligible.

The national organizations are now realizing their predicament. At a recent Washington news conference, Brent Wilikes, executive director of one of the country’s largest and oldest Latino advocacy groups, the League of United Latin American Citizens said, “Our community is angry. Our members feel betrayed…We never believed in our wildest dreams that President Obama would have a record like this.”

With the midterms coming and 2012 waiting in the wings, such threats present a predicament to the president and his party. Latinos are a large and growing segment of the voting-age population in California, Nevada, Texas, Florida and New York. Latinos voted Democratic by a wide margin in 2008. While they may not be defecting any time soon to a Republican Party that alienated them during the last nationwide immigration debate, they could very well stay home, and make a Democratic majority in Congress a much more fragile creature.

Sens. Charles Schumer of New York and Lindsey Graham of South Carolina will soon publicly unveil their immigration reform proposal, and demonstrators are planning to rally later this month in Washington. Restless Latino elected officials and activists say they may not be prepared to wait until the second half of the Obama administration’s first term.

At the same time, Democratic members already under public pressure over health care reform are quietly asking that they not be asked to make what could be another very tough vote in 2010.

When I asked Rep. Joe Baca of California about members of his caucus who face voter anger over immigration at a time of high unemployment, he said his colleagues were elected to take tough stands when the times demanded them, and politics should not keep them from doing what is right. Rep. Baca’s Southern California seat does not appear on any list of vulnerable, marginal, or competitive districts in the fall.