ATLANTA — When President Donald Trump stepped up his attacks on mail-in voting earlier this year, Democrats feared his message would sow public distrust in the U.S. Postal Service and lead voters who planned to cast ballots by mail to sit out the election.

But record in-person turnout in Georgia, Texas and other states where early voting is already underway suggests the opposite effect.

“The fear that it wouldn’t count made me come in to vote. No absentee, no dropping my vote off, no mailing my vote,” said Debra Henson, a Democrat from Atlanta who voted in person for Joe Biden last week.

More than 1 million voters in Georgia have cast ballots in person since polls opened on Oct. 12. The milestone was reached on the ninth day of early voting, setting a new state record. More than 4 million people have cast ballots early in person in Texas, according to state data, far outpacing the total at a similar point in the 2016 election.

Political strategists from both major parties believe Trump’s criticism of mail-in voting is driving the increase in early in-person voting, as are fears over voter suppression in communities of color and voters’ higher-than-expected comfort level with going to the polls during the pandemic. Even as they were voting early, people in Georgia and Texas shared distrust of the voting process and fear about whether their votes would be counted.

Republicans worried that the president’s attacks would increase turnout specifically in Democratic areas, and that’s now bearing out in the early voting surge in Atlanta and other left-leaning cities, said David Johnson, a political strategist in Georgia.

“There’s a great concern that it’s backfired and that it’s not only going to drag him down, but also down-ballot candidates as well,” Johnson said. 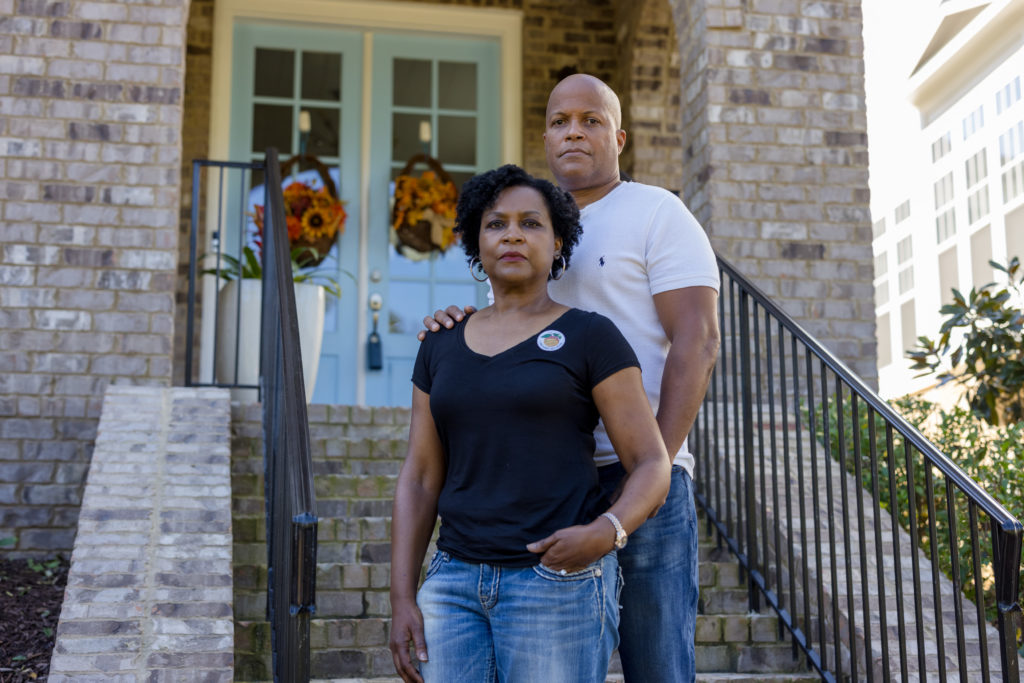 Glenda and Sedrick Blake voted early in-person recently at a polling site near the home outside of Atlanta. Sedrick Blake was purged from the voter rolls ahead of the state’s 2018 governor’s race. (Photo by Lynsey Weatherspoon for the PBS NewsHour)

Georgia has emerged as a critical battleground state in the presidential election and polls show Texas is competitive in 2020. Georgians will also be voting in two close Senate races where sitting Republicans are polling neck-and-neck with their Democratic challengers.

Trump, who has voted by mail in Florida, has repeatedly and baselessly claimed that mail-in voting leads to fraud, though studies show voter fraud is exceedingly rare in U.S. elections. In the first presidential debate in September, Trump said he expected the Supreme Court would weigh in on ballot issues after the election.

After months of the president undermining the mail voting process, some Democratic officials in Georgia said they are now urging Biden supporters to vote in person if they feel safe doing so. That represents a shift from earlier in the year when Democrats were criticizing Republicans across the country for moving forward with in-person voting during the primary elections, and encouraging states to expand mail voting requirements to allow more people to participate.

The dual concerns that COVID-19 could be spread at the polls and that fear of contracting the virus could lead many people to sit out the election resulted in a number of states automatically mailing ballots to registered voters, and many more expanding mail-in voting to all voters.

As a result, despite concerns about voting by mail and the increase in early in-person voting, the number of absentee ballots cast in this election is already setting records as well.

More than 800,000 Georgia voters have already cast absentee ballots, almost eights times the number by this point in the election in 2016, according to data released Thursday by the secretary of state’s office. Texas is also on pace to set a new record for absentee ballots, and mail-in voting nationwide is expected to surpass that in 2016.

As the election has grown closer, Democrats said they worry the Trump campaign could challenge absentee and mail-in ballots in court, and recognize the advantage of getting as many people as possible to vote in person during the early voting period and on Election Day.

“We’re not going to sway people one way or the other,” said Lewanna Heard-Tucker, the chair of the Democratic Party in Fulton County, which includes Atlanta. But “as many people as can vote in person, that’s what we want.” 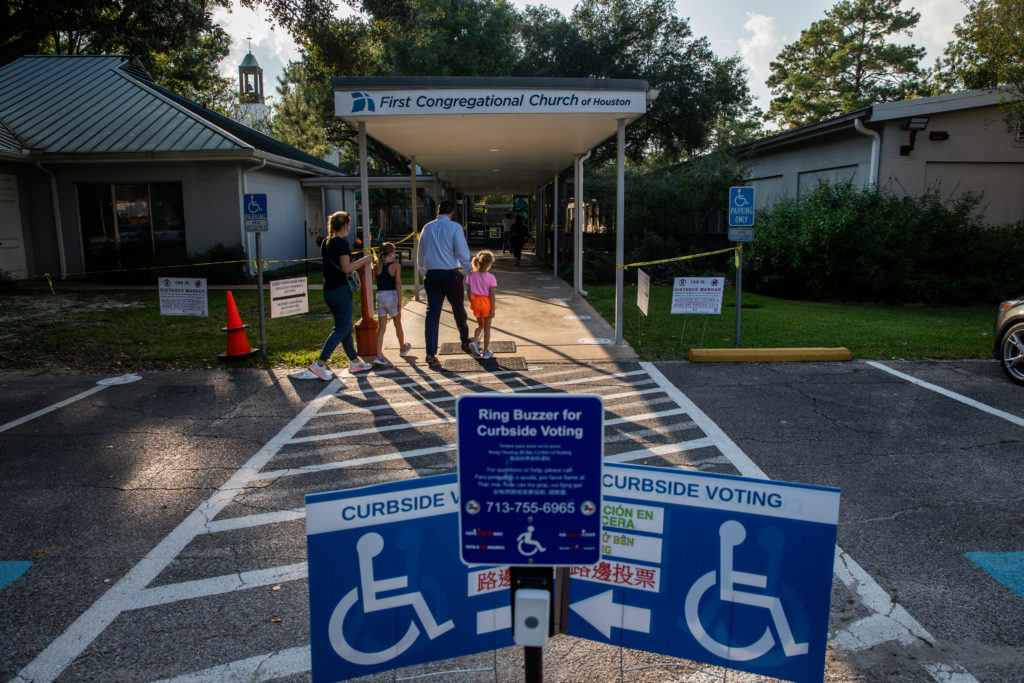 A family arrives at an early voting location in Houston on Thursday, October 15 2020. (Photo by Scott Dalton for the PBS NewsHour)

Daniel Hodge said he voted in person in an Atlanta suburb last week because he feared a legal battle over mail-in voting.

“[Trump’s] going to try and challenge the mail in ballots,” Hodge said outside his polling place while waiting in line to vote. “So I feel like if [Democrats] can, I think you should” vote in person. Hodge added that he did not have concerns about the coronavirus while voting in person, a sentiment shared by voters from both parties waiting in line to vote that day.

“Just about everyone has a mask on. People are social distancing. I don’t feel unsafe at all,” Hodge said.

Voters in Georgia and Texas who went to the polls early also said they were driven by concern that their votes might not be delivered in time by mail.

Postmaster General Louis DeJoy, a Trump donor who took over the job in June, unveiled plans in August to cut costs at the USPS but reversed course weeks later and suspended the changes after Democrats claimed they would lead to delays that could impact the delivery of ballots in the November election.

The controversy came in the same month Trump opposed including a $25 billion funding boost for the USPS in a coronavirus relief bill. Trump claimed in an interview with Fox Business that Democrats wanted the extra spending to fund vote-by-mail operations. Without it, “you can’t have universal mail-in voting,” he said. Trump later said he’d support the funding if Democrats agreed to White House requests in negotiations over the coronavirus relief package. Those talks remain ongoing as both parties search for a deal before Election Day.

Some Republicans said they shared Trump’s concern about mail-in voting. At the polls, “we have to show a voter ID and they have to verify it. By mail, who knows what that process is and if it would even be delivered,” said Gary Groat, a Republican in Houston who voted in person for Trump. 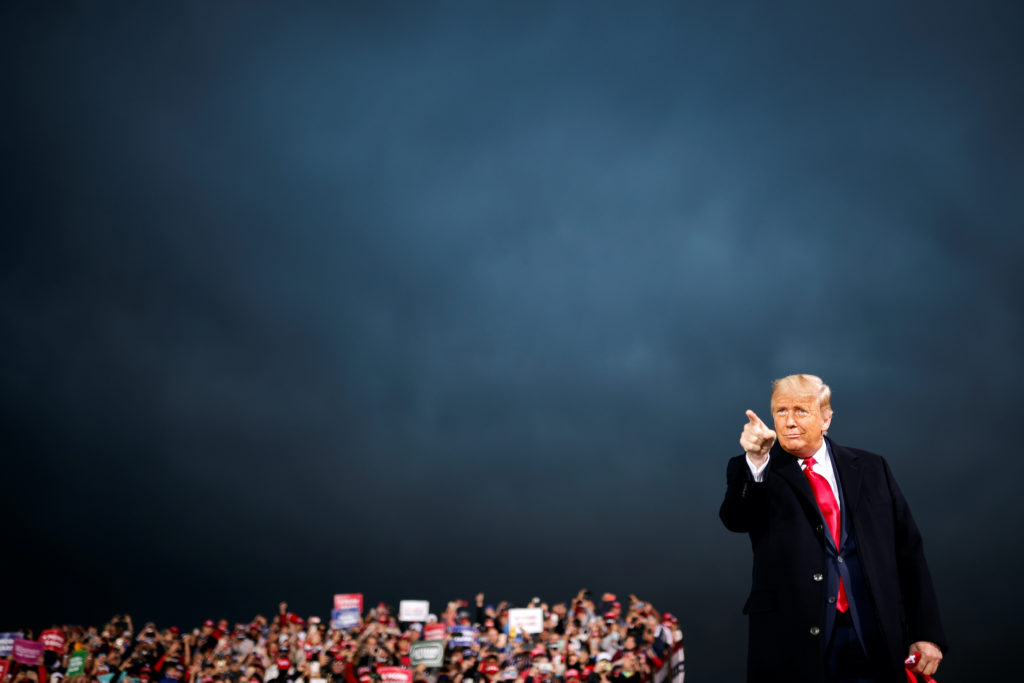 Democrats pinned the blame on Trump for stoking unnecessary fear about voting by mail. “I don’t trust the post office, and I don’t trust anything with the current administration,” said Jon Kearney, who voted for Biden at an early voting location in Atlanta.

Others noted their distrust of the post office predated Trump and said their decision to vote in person was tied to long-standing fears of voter suppression, especially in communities of color.

Sedrick Blake was among the more than 500,000 Georgia voters dropped from the rolls by then-secretary of state Brian Kemp ahead of the state’s 2018 gubernatorial election, in what is widely considered to be the largest voter purge in U.S. history. Kemp, a Republican, beat his Democratic challenger Stacey Abrams by a narrow margin in a race critics say Abrams would have won if Black turnout had not been suppressed.

Blake, who is Black, was forced to cast a provisional ballot in that election, but was later told by his county elections board the vote was not counted. Last week, he waited in line with his wife for more than two hours to cast a ballot for Biden at an early polling site in Alpharetta, a suburb of Atlanta.

“I’ve actually experienced voter suppression,” Blake said. “This year, I wanted to see my vote cast personally” to make sure it counted.

“Given some of the things that have happened in this state, there’s a certain level of mistrust in the system,” said Andra Gillespie, a political science professor at Emory University.

A debate over voting rights has dominated the early voting period in Texas as well, after Gov. Greg Abbott, a Republican, limited each county to one drop box location for voters to hand in their absentee ballots. In Texas, the only people eligible to vote by absentee ballot are those aged 65 and older; people with disabilities or who are sick; voters who are out of their home counties during the early voting period or on Election Day; and eligible voters who are in jail. 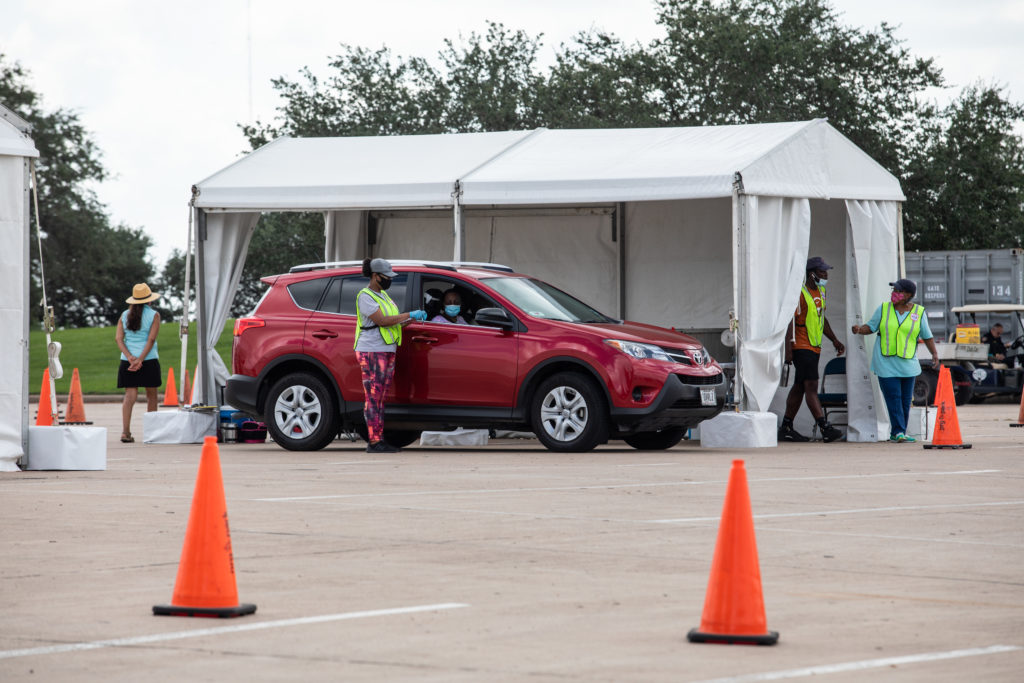 Voters drop-off their ballots at NRG stadium in Houston on Thursday, October 15 2020. (Photo by Scott Dalton for the PBS NewsHour)

The fight over drop boxes centered on Harris County, which includes Houston and at nearly 2,000 square miles is one of the largest counties in the country. The location is in a vast parking lot outside NRG Stadium, surrounded by highways and difficult to reach by foot. There is public transportation nearby, but it’s far enough away that the county set up a shuttle service with golf carts to bring voters to the drop box site.

Critics argued Abbott’s order was aimed at suppressing Democratic turnout in Houston, which is 40 percent Hispanic and Black. Opponents also noted the decision forced some voters who live outside the city to drive up to 100 miles round trip to use the drop box location.

On a recent visit, a line of cars snaked past several white tents serving as the drop box site, where poll workers in neon vests waited to accept absentee ballots. No voters arrived on foot or by the shuttle service from the nearest public transportation stops.

“Voter suppression is anything that makes it less likely that a voter is ultimately going to cast their vote: stirring up confusion, making voting inconvenient, putting obstacles in the voter’s path,” said Chris Hollins, the official in charge of elections for Harris County and a Democrat.

Flor Hoill, who was born in Mexico and came to the United States as a young child, said she chose to vote in person in a wealthy, predominantly white neighborhood in Houston because she feared Trump supporters would show up at polling sites in Hispanic and Black communities to try to intimidate voters. In Texas, voters can cast ballots at any polling place in the county where they live. 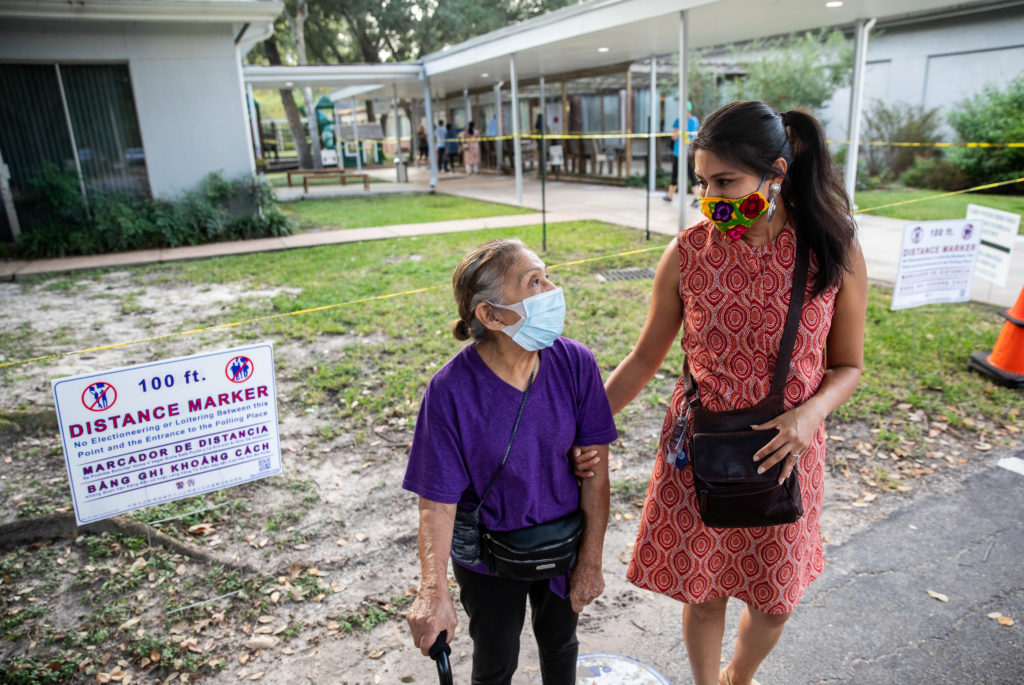 Flor Hoill and her mother Francisca Sarabia after voting in Houston on Thursday, October 15 2020. (Photo by Scott Dalton for the PBS NewsHour)

“I was afraid to vote in person because I was afraid there were going to be people suppressing my vote,” said Hoill, who cast a ballot for Biden.

Democrats are hoping the surge in early turnout — combined with a growing Hispanic population that leans left — could put Texas in play for Biden in November. Trump won the state by 9 points in 2016, and is ahead by an average of just 4.4 percentage points in polls taken over the past month. But despite the state’s changing demographics it remains a challenge for Democrats at the national level, and has not been a top priority for the Biden campaign.

Biden is slightly ahead of Trump in Georgia, a once reliably red state Democrats view as a more realistic pick-up opportunity in 2020.

Heard-Tucker, the Democratic chair of Fulton County, said the early turnout numbers in Georgia offered proof Trump’s efforts to discourage voters were failing. “They have gone out of their way to make it a hard process for people,” she said. “But we’re seeing record turnout.”

Left: People wait in line on the first day of early voting for the general election at the C.T. Martin Natatorium and Recreation Center on October 12, 2020 in Atlanta. Early voting in Georgia runs from October 12-30. (Photo by Jessica McGowan/Getty Images)