BROOKLYN, N.Y. — The event was billed as “Totally Free” and “Totally Chill(ary),” an unofficial Hillary Clinton campaign party that would feature stand-up comedy, live rap and a pantsuit competition.

The pantsuit contest never happened, and the local rap act failed to show up to the club, a small, out-of-the-way venue in the Bushwick section of Brooklyn.

But for nearly two hours on Saturday night, three days before the New York primaries, a cast of comedians put together by the film maker Heather Fink held up their end of the deal, delivering a free, feminism-themed show for a crowd of mostly female Clinton supporters who were there to celebrate her presidential campaign.

“Anytime I post something positive about Hillary on Facebook, people tell me I’m a bad person, they tell me I’m stupid and don’t know anything.”

For both the comedians and their audience, the event represented a rare opportunity to express support for Clinton in public without fear of being criticized by friends and family members — or reprimanded by male supporters of Senator Bernie Sanders, known as “Bernie bros,” who have become infamous for lashing out against female Clinton voters on Facebook and Twitter.

“Anytime I post something positive about Hillary on Facebook, people tell me I’m a bad person, they tell me I’m stupid and don’t know anything,” Rachel Coleman, one of the night’s performers, said in an interview before the comedy show got underway.

“They mansplain to me a lot about why Hillary is terrible,” Coleman added. “They say, ‘You don’t know about [Clinton’s paid speeches to] Goldman Sachs.’ No, I know, but I’ve made an informed decision.”

Susan Kruglinsky, a writer and editor from the Upper West Side, said she frequently came under attack from liberal friends — both in person and online — for supporting Clinton for president.

“I have to be careful about what I say,” Kruglinsky, 48, said as she waited for the show to begin. “I feel like a lot of my friends have been turned off by me because of my support for Hillary. It’s disappointing.” 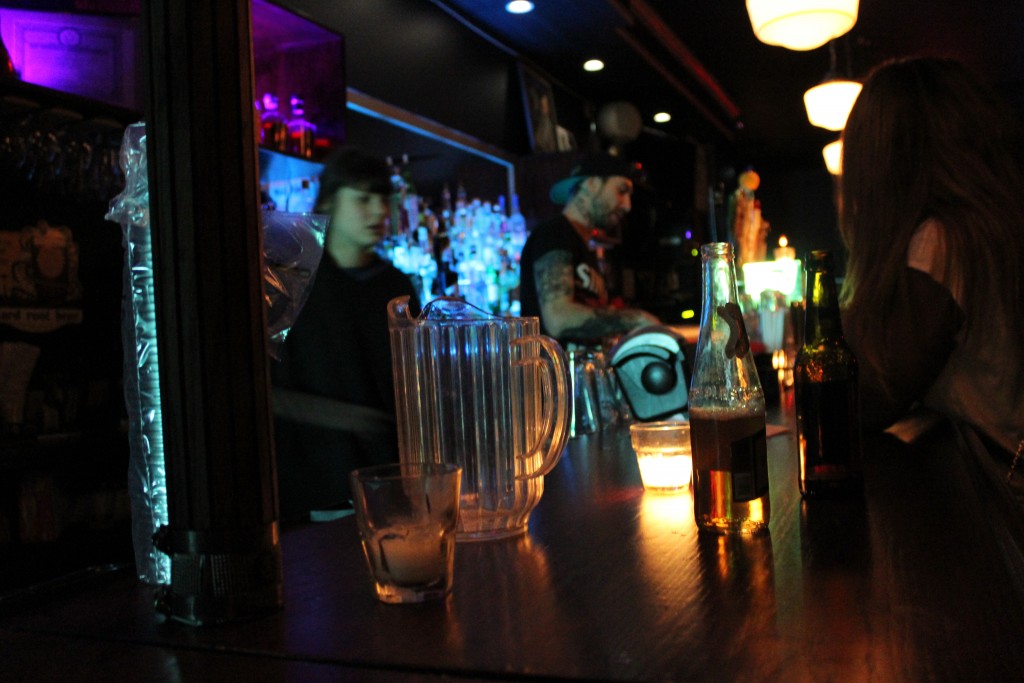 Kruglinsky recalled facing similar criticisms in 2008, when she chose to support Clinton instead of Barack Obama in the Democratic primaries. She said she had hoped that the dynamic would be different this time around with Sanders supporters.

“It’s not that they’re looking for a male figure,” she said. “The sexism that comes into this is not appreciating a woman who is so accomplished. And dismissing her. It’s a complete insult.”

On stage, a parade of pro-Clinton comedians highlighted the gender issues at play in the race, skewering Sanders’ ambitious campaign promises and celebrity-studded rallies.

“Everybody keeps telling me I’m wrong” for backing Clinton, said Hilary Schwartz. “But most editorial boards keep telling me I’m right. Do I listen to the New York Times, or Danny Devito?”

Schwartz also trained her ire on young voters who have propelled Sanders to victory in several primaries. Sanders trails Clinton in pledged delegates and is unlikely to secure the Democratic nomination, but his support from millennial voters has helped make the primaries far closer than many had expected.

She saved some of her sharpest language for Bernie bros in particular.

“They will crash into your comments section [on Facebook]” with crude insults and foul language, she said, and added, joking, “What are people in their twenties called again?Assholes.”

Benari Poulten joked that finding the venue, Gold Sounds — which is located several blocks from the nearest subway station — symbolized the obstacles that Clinton and her supporters still face, in a year where Sanders has attracted a massive following with relative ease.

“You can just roll out of bed and walk into a Bernie event. [To find Clinton backers], you have to take two trains and a bus and an uber and a lyft and, like, talk to somebody at the door, who’s like, ‘Do you really want to be here?’”

“You can just roll out of bed and just walk into a Bernie event,” said Poulten, a comic who works for Comedy Central’s The Nightly Show with Larry Wilmore. To find fellow Clinton backers, “you have to take two trains and a bus and an uber and a lyft and, like, talk to somebody at the door, who’s like, ‘Do you really want to be here?’”

Roughly 100 people really wanted to be there, despite the fact that the party didn’t start until midnight, and lasted until 4 a.m. Heather Fink, the show’s organizer, said she wanted to hold the event on a weekend when people who work during the week would have time to attend.

Fink, a 34-year-old former standup comic who recently finished her first feature film, said she was inspired to throw the party after hearing from numerous friends who said they didn’t feel comfortable sharing their support for Clinton in public or online.

“It’s very common,” Fink said, in an interview before the event. She hastened to say that not all Sanders fans were part of the problem. “There are good, sweet-hearted Bernie supporters.”

During a break between acts, Fink, who was emceeing the show, noticed a young man in the audience who was wearing a Sanders campaign hat.

Fink paused, unsure what to do. Then she leaned into the microphone and asked him if he had “chill vibes.” He assured Fink that he did, so she invited him onto the stage to speak.

“I appreciate you for who you are. I’m in no way, shape or form here to tell you that you’re doing anything wrong,” the man, who said his name was Rooster Riley, told the crowd. He added that he was a “true believer” who had logged about 6,500 miles on the campaign trail for Sanders.

By 2:30 a.m., after the last comedy act was over and the house music was cranked up, Fink was visibly relieved that the night had gone well, despite the lack of pantsuits and the rap performance getting scrapped.

Left: Heather Fink outside of the Gold Sounds music club in Brooklyn on Saturday night. Photo by Daniel Bush