The Democratic Party is relying on Donald Trump’s anti-immigrant rhetoric to drive up Latino turnout this fall. But while conventional wisdom holds that most new Latino voters will register as Democrats, an increasing number in California — a key state in the battle over immigration — are actually opting out of the two-party system altogether, a troubling sign for a Democratic Party that has long taken the Latino vote for granted.

Since 2008, California — which holds its Democratic and Republican primaries on Tuesday — has seen a 35 percent spike in people registering as “No Party Preference” voters, instead of as Democrats or Republicans. California’s new nonpartisan or no-party voters are primarily young and Latino, according to Paul Mitchell of Political Data, a California voter information and political campaign management group.

“As cities get more heavily Latino or Asian, [the] rate of nonpartisan registration rises significantly, while Democratic registration is flat-lined and Republicans are losing voters,” Mitchell said. 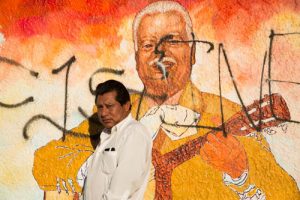 Agustin is a No Party Preference voter from East Los Angeles. He owns his own company, ‘Agustin Y Su Marachi.’ He plays around the Mariachi Plaza Station in Los Angeles, where he meets most of his clients. Photo by Daniel E. Sanjur

The surge of Latino no-party voters in California isn’t surprising, given that many come from families whose parents do not have strong ties to either major political party. Often, their parents were born outside of the country or are less interested and involved in U.S. politics, said Mark DiCamillo, a senior vice president at Field Research, a California-based polling firm.

Of course, the phenomenon isn’t limited to Latinos. “Most voters don’t understand political organizations,” said Adrian Pantoja, a senior analyst at Latino Decisions, a research firm headquartered in Seattle. “It’s a level of politics far too complicated. Some journalists who cover it don’t even fully understand.”

The growth of nonpartisan registered voters might not impact the final outcome of Tuesday’s Democratic primary, or the general election this fall. California’s Democratic primary is open to no-party voters, and most are expected to vote for Hillary Clinton or Sen. Bernie Sanders of Vermont.

The GOP primary is closed to nonpartisan voters. And in November, the vast majority of California’s Latino voters will likely vote for the Democratic nominee over Donald Trump, regardless of their party affiliation. 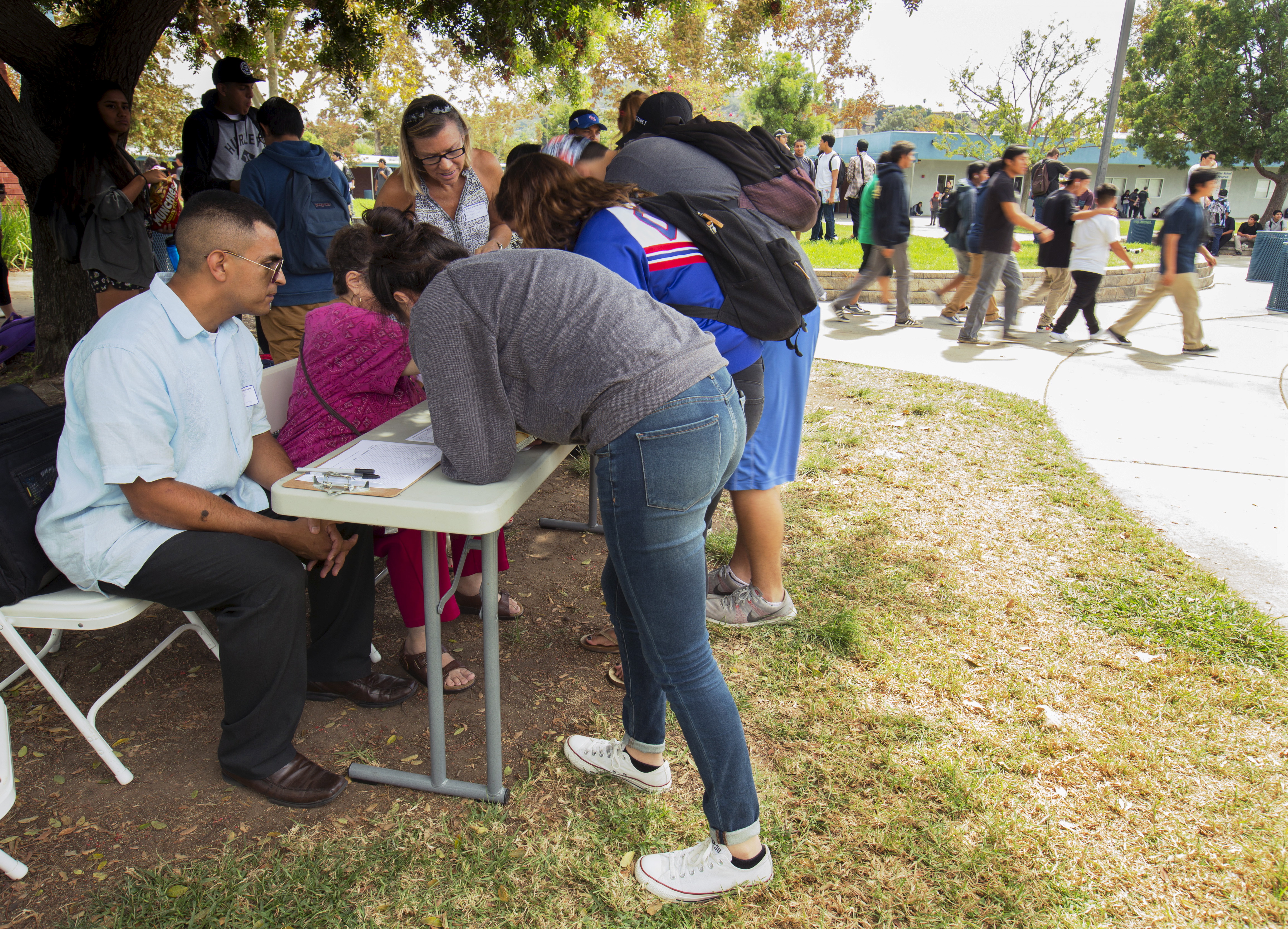 Armando Telles from the Unity Project of California and Caroline Theiss-Aird of the North County Immigration Task Force helped seniors sign up to vote during National Voter Registration day at a high school in Escondido, California last September. Photo by Mike Blake/Reuters

Still, it’s becoming increasingly clear that Latino turnout this election is less of a pledge of allegiance to the Democratic Party, and more of a vote against Trump. And beyond the implications for 2016, the no-party voter surge reveals an important generational divide among Latinos like Betsy Avila, which could impact Democratic candidates for years to come.

Avila, a 28-year-old artist in Los Angeles, says she updates her Mexican-born parents regularly on the state of the presidential election. There isn’t a dinner-table discussion that goes by without election talk, Avila said.

But in these discussions, Avila said she often finds herself explaining the intricacies of U.S. politics to her parents. “It goes beyond English to Spanish. I provide nuance,” she said.

Avila cited Sanders, who relies on numbers and catchphrases like “the 99 percent” and “the 1 percent” that can mean little for immigrants without being placed in historical context. 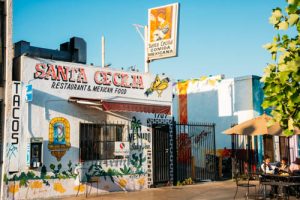 Santa Cecilia is a family-style restaurant at the heart of Boyle Heights that serves hand-made tortillas and homemade salsas. Photo by Daniel E. Sanjur

That disconnect is readily apparent in Los Angeles County, which has the largest Latino voter bloc in the state. More than one-third of the residents in the county are immigrants. The number of new no-party voters in Los Angeles is growing daily, according to Diana Colin, the director of civic engagement at the Coalition of Humane Immigrant Rights in Los Angeles, a nonprofit that runs a voter registration program.

So far, the organization has registered the same number of no-party voters as it has Democrats, Colin said.

Democrats should not presume they can count on the Latino vote, Colin said. Because many Latinos don’t have a deep-seated allegiance to a political party, results matter. And while education and the economy are top concerns, most issues for Latinos in California ultimately link back to immigration.

The growing number of no-party voters reflects this frustration — and serves as an explicit rebuke to the Democratic Party and President Obama for failing to pass immigration reform under his watch.

Critics have sought to dismiss the no-party surge, arguing that most are young and undecided voters who don’t have a big impact on elections. But Latino activists say this misses the point. Most no-party voters are directly affected by immigration. In Los Angeles County alone, 59 percent of children have at least one immigrant parent.

“The children of immigrants are the guardians of their parents,” Colin said. 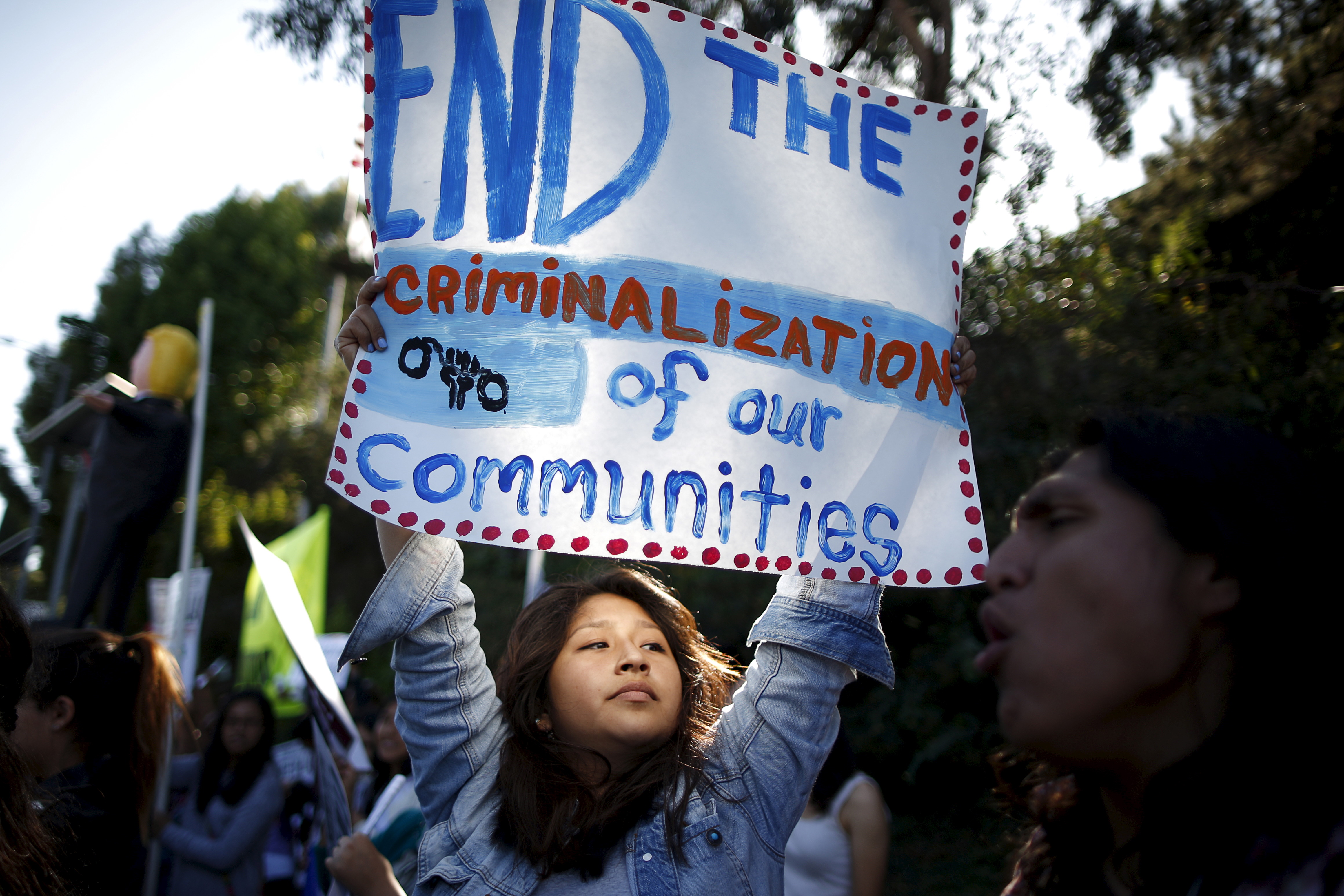 At the same time, Latinos’ frustration with Democrats pales in comparison to the fear and anger that many voters feel toward Trump, who has focused his anti-immigrant rhetoric on Hispanics — and Mexicans in particular — from the start of his campaign. The issue hits home in California, which has a large population of Mexican immigrants.

Guerra pointed to former Gov. Pete Wilson of California, a Republican who championed Proposition 187, a controversial anti-immigrant ballot measure, while running for re-election in 1994. Prop 187 attempted to establish a statewide citizenship screening system and prohibited most government services — including public education — for undocumented immigrants. 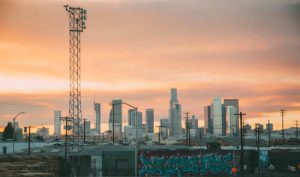 The number of new no-party voters in Los Angeles is growing daily, according to a immigrant rights nonprofit that runs a voter registration program. Photo by Daniel E. Sanjur

Wilson won re-election, but since leaving office in 1996, the California electorate has changed drastically. Latinos made up just 10 percent of the state electorate at the time; now they’re the state’s largest voting bloc.

“California has come a long way since Prop 187,” said Colin. “But Latinos in California have not forgotten.”

Still, Democrats are going to have to work harder to convince Latinos to remain in the party. Until that happens, the number of no-party voters could keep growing.

“The Democratic party should have California Latinos’ unwavering support,” said Jose Parra, the CEO of Prospero Latino, a left-leaning political consulting firm in Washington, D.C., “but it doesn’t because the party has not [done enough] to sustain it.”

Left: A man walks past a mural in the Echo Park section of Los Angeles, which is home to many Mexican and Central American migrants. A growing number of new Latino voters in California are registering as "Non-Party Participants," in a rebuke of the Democratic Party. Photo by Lucy Nicholson/Reuters