HAVANA — President Barack Obama pledged to “do whatever is necessary” to help Belgian authorities seek justice for the more than two dozen people who were killed Tuesday in explosions at the Brussels airport and the subway system.

“We stand in solidarity with them in condemning these outrageous attacks against innocent people,” Obama said in Havana, where he was closing a historic three-day visit. He commented on the events in Brussels at the top of a keynote address to the Cuban people.

“We will do whatever is necessary to support our friend and ally Belgium in bringing to justice those who are responsible,” Obama said. He said America’s thoughts and prayers are with the people of Belgium.

Obama said Tuesday’s attacks provided yet another reminder “that the world must unite,” regardless of nationality, race or faith in “fighting against the scourge of terrorism.”

“We can and we will defeat those who threaten the safety and security of people all around the world,” he said.

Secretary of State John Kerry, who spoke by telephone from Cuba with the Belgian foreign minister, said in a statement that the U.S. was working “to determine the status of all American citizens in Brussels.” The embassy there issued a statement telling Americans to stay where they are and “take the appropriate steps to bolster your personal security.”

The State Department said it was looking into reports that at least three Americans may have been wounded in the attacks, but cautioned that those reports were preliminary and unconfirmed.

At least one of the attacks was believed to be caused by a suicide bomber, and Belgium raised its terror alert to its highest level.

Rep. Adam Schiff, D-Calif., the ranking member of the House intelligence committee, said the attacks “bear all the hallmarks” of an Islamic State group coordinated or inspired attack. His staff said he received a preliminary briefing Tuesday from U.S. officials. Schiff says it’s unclear if encrypted communications played a role in the attacks but noted that the Brussels attacks occurred despite the city being under constant vigilance. 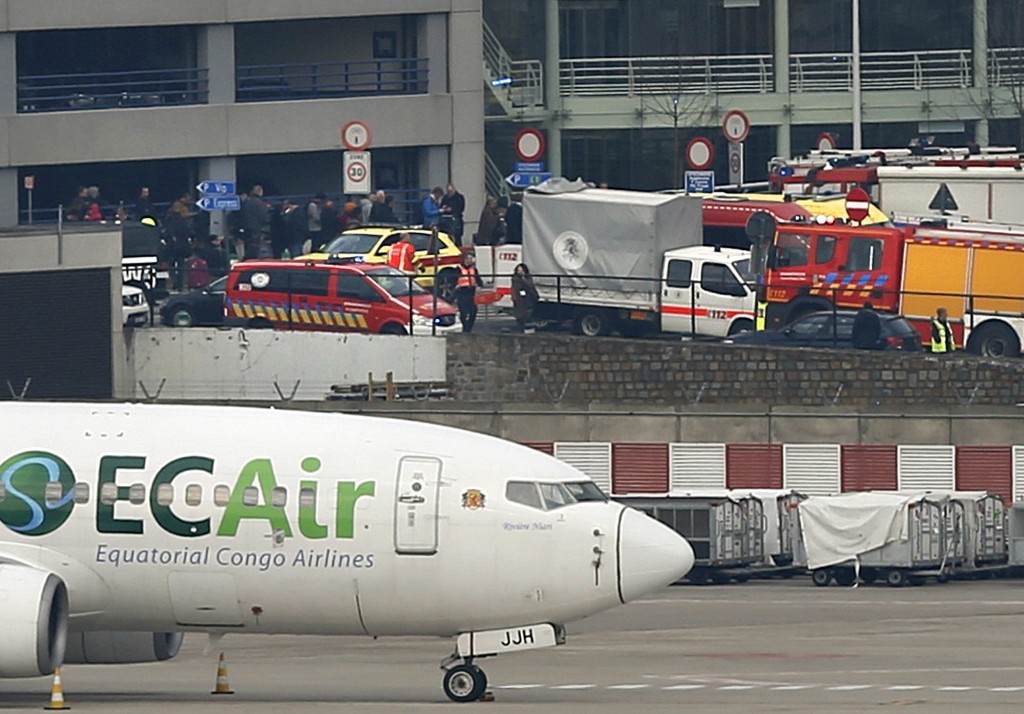 Emergency services at the scene of explosions at Zaventem airport near Brussels. Photo by Francois Lenoir/Reuters

The U.S. Department of Homeland Security said it was closely monitoring the unfolding events and “would not hesitate to adjust our security posture, as appropriate, to protect the American people.”

DHS reiterated that members of the public should report any suspicious activity in their communities to law enforcement authorities.

Attorney General Loretta Lynch was also briefed on the attacks, Justice Department officials in Washington said. They said the Justice Department and the FBI were coordinating with other U.S. government agencies, as well as with Belgian counterparts.

Such a bulletin was issued in December advising the public that federal law enforcement was concerned about the possibility of homegrown violent extremists and terrorist-inspired individuals.