FARGO, N.D. — “It’s easy to talk about Making America Great Again,” Sen. Ted Cruz told the crowd during an arena speech yesterday at North Dakota’s Republican Party convention. “You can even print it on a baseball hat.”

Outside the arena hall, down a flight of stairs and past a concession stand, Robin McNamara had done just that, and she was selling her custom-made version of Trump’s red, slogan-emblazoned hat for a cool $22 at her stand in the lobby. Business was brisk.

The 2016 election “has been good for business,” said McNamara, who launched her Williamsburg, Va.-company, Stars & Stripes Forever, in 1996.

McNamara sells ties, purses and T-shirts that deal mostly in American flags, NRA logos and famous quotations from Republican presidents. There are the double-sided knit “Cruz” scarves ($25; “super soft!”), the Ben Carson caps, and the various GOP buttons ($3 apiece, or two for $5). All unofficial campaign merchandise.

She has worked at nearly every Republican National Convention since 1996, and she operates a stall at campaign rallies and state Republican Party conventions like the one in North Dakota. And her travels across the country have brought her face to face with the passion-filled spectrum of GOP primary voters.

“People are angry. They’re fed up with the Republican Party,” she said in an interview shortly after Ben Carson addressed the state convention on Sunday.

The customers who gravitate toward her Trump regalia, at events in states from Michigan to Georgia, are mostly “blue collar people,” McNamara said. Customers who buy Cruz memorabilia appear to be more conservative and religious than the Trump enthusiasts, she said. And people who prefer the campaign gear associated with Jeb Bush, Ohio Governor John Kasich and Sen. Marco Rubio tend to be “more involved with the process.” 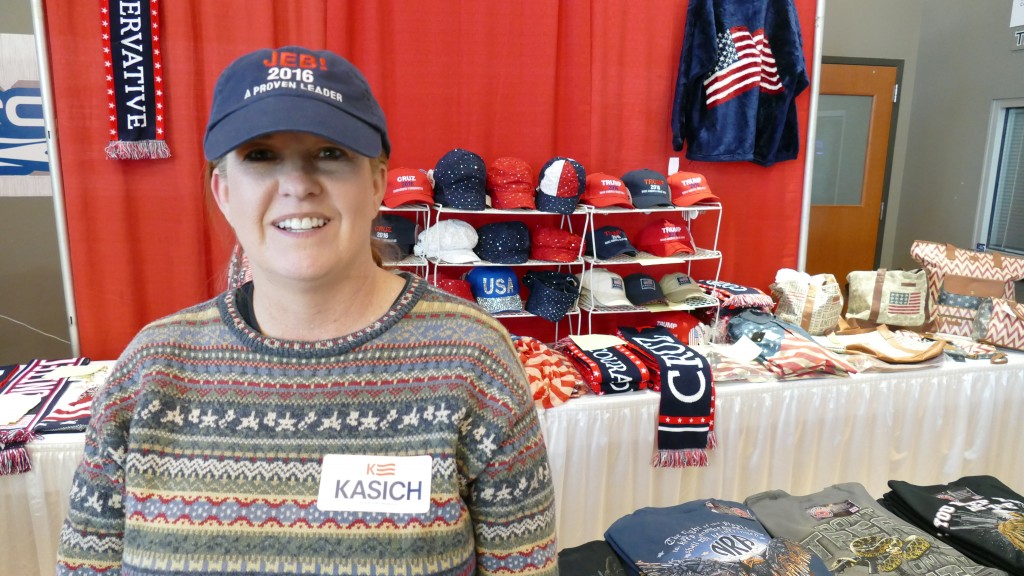 Robin McNamara in front of her stall at the state Republican Party convention in Fargo, N.D. Photo by Daniel Bush

As McNamara spoke, a woman approached the stand to examine the hats and interrupted her with a question. “Are the Trump hats flying off the shelf? I’m just curious, that’s all.”

“I’ve sold more Trump stuff” over the course of the primaries, she said after the woman left, “but that’s because his events have been larger.”

Trump has drawn bigger crowds than his rivals. But McNamara said she has seen a decline in attendance in recent years at state GOP conventions, where party insiders elect delegates to the national convention.

And this year, the people who do show up to state conventions seem to think of them more as entertainment, McNamara said. 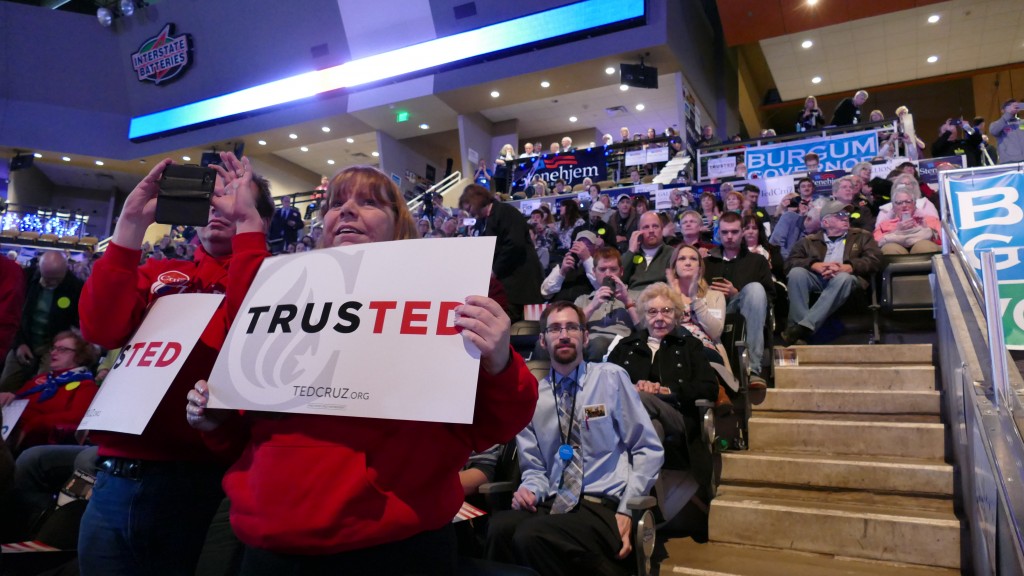 While she spoke, a man approached the stall and lingered over an NRA shirt that read: “Keep Calm and Carry On.”

“No, sorry,” McNamara answered. “The NRA shirts — the smallest I have is a medium.”

The customer, a farmer from New Salem, N.D., named Toby Olin had hoped to buy the NRA shirt for his son. He settled on a size 2XL for himself, and two size smalls for his son with quotes from Thomas Jefferson and Ronald Reagan.

The Reagan shirt featured one of the 40th president’s best-know formulations: “Government is not the solution to our problem; government is the problem.”

McNamara backed former Florida Governor Jeb Bush early in the primaries. But with Bush out, she said she’s undecided. “I like John Kasich. I personally think we need someone with experience,” she said.

When a reporter pointed out that she was wearing a Bush hat and a Kasich sticker, McNamara laughed. “I’m probably confusing people,” she said. She paused and then added, “That would be a dream ticket.”

Meanwhile, a customer stopped at the stand, glanced at a display of campaign buttons, and grumbled, “Why is everyone so mad at Trump?”

The man, Casey Cashman, a Trump supporter and small business owner from Bismarck, picked out five buttons and criticized Republican Party leaders for trying to stop Trump from winning the GOP nomination.

“Even if he doesn’t make it,” he said, “they’re going to be keepsakes.”