In the Trump era, separating sports and politics is harder than it seems

Rep. Ryan Costello, a Republican from Pennsylvania, had been looking forward to the White House meeting between President Donald Trump and the Philadelphia Eagles. Then, with a single Tweet, Trump canceled it.

“Eagles my fave team. Super Bowl win so meaningful as Philly sports fan. POTUS handled poorly. This is a depressing commentary on our political culture, very deflating to me,” Costello, a vocal Trump critic who is not seeking re-election this year, wrote Tuesday on Twitter. “Was really excited,” he said, adding, “disappointed in all of this.”

Costello was not alone in denouncing Trump’s last-minute decision to cancel a celebration of the 2017 Super Bowl champions that was scheduled to take place Tuesday at the White House. Trump cited low Eagles turnout and the new NFL policy that requires players to stand on the field during the national anthem but also gives them a choice to stay in the locker room.

To White House press secretary Sarah Huckabee Sanders, the Eagles players who had refused to attend the event before it was canceled were staging a “political stunt.” For critics, the decision was the latest step in the president’s ongoing effort to politicize the country’s most popular sport by stoking a divisive debate about race and patriotism.

The mingling of sports and politics has been rising steadily for the past two decades.

Yet the mingling of sports and politics has been rising steadily for the past two decades, after a period of corporate brand-building in the 1980s and ’90s when, unlike today, star athletes largely avoided speaking out on controversial topics.

While Trump’s monthslong feud with NFL players over their protests during the national anthem reflects his willingness as president to make personal attacks that play to his base, it also reflects “the increasing cultural visibility and importance of sports” in the political arena, said Jay Coakley, a professor emeritus of sports sociology at the University of Colorado.

Some fans may want the sports and political worlds to remain apart. But the movement started by former San Francisco 49ers quarterback Colin Kaepernick, and Trump’s response, has made clear that is no longer possible, at least not in today’s politically-charged sports culture.

“Sports are really not as separate from the rest of the world as we think they are,” said Coakley, who said he disapproved of Trump’s attacks on the NFL and decision to cancel Tuesday’s event with the Philadelphia Eagles. 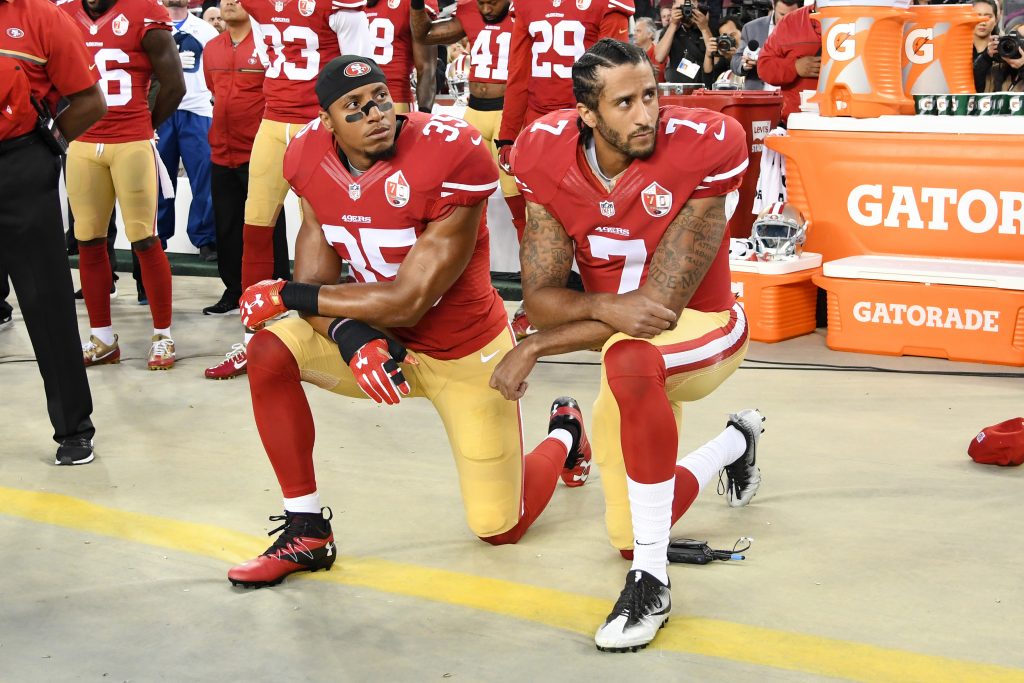 Colin Kaepernick, right, and Eric Reid of the San Francisco 49ers pictured kneeling in protest during the national anthem prior to playing the Los Angeles Rams at Levi’s Stadium on September 12, 2016 in Santa Clara, California. (File Photo by Thearon W. Henderson/Getty Images)

Social activism in sports peaked and then plummeted in the the last part of the 20th century. In the 1960s and ‘70s, Muhammad Ali, the football legend Jim Brown, and other stars spoke out on issues of race, war and poverty. But that activism faded in the 1980s, said Coakley, when athletes like Michael Jordan focused instead on amassing lucrative endorsement deals.

In the 1980s and ‘90s, sports stars “took the Michael Jordan approach, and that was keep your mouth shut and sell shoes, and create a brand that didn’t have any downside associated with it,” said Coakley, the author of a leading textbook on sports sociology.

Today, more athletes feel financially secure enough to speak up, Coakley said. And in the age of social media, he said, sports stars also know they’ll find support for their views online, among fans who expect to have a more personal connection with the athletes they root for. “It’s only been now in the last decade and a half that athletes [have] been willing to speak out,” Coakley said.

Kaepernick began kneeling during the national anthem before games in 2016, in order to protest racism and police brutality. He quickly attracted attention, from sports commentators and politicians but also online. When Trump lashed out last year, calling the NFL players who participated in the protest unpatriotic and urging team owners to fire them, the hashtag #TakeTheKnee took off, both among Kaepernick supporters and those who backed Trump. The president kept up his attacks, and last month, the league passed a new policy that requires players who choose to be on the field for the national anthem to stand while the anthem is played.

But the policy, which was intended to be a compromise, left all sides unsatisfied. The players’ union said the policy impinged on the right to free speech, while Trump said the rule did not go far enough because it gives players the option of remaining in their locker rooms during the national anthem.

Trump cited the debate in his tweet Monday evening canceling the event with the Philadelphia Eagles, even though no members of the team knelt during the national anthem last year. The announcement came after the Eagles informed the White House that a majority of the team’s players would not attend the event, a snub that reportedly infuriated the president.

“The Philadelphia Eagles Football Team was invited to the White House,” Trump wrote. “Unfortunately, only a small number of players decided to come, and we canceled the event. Staying in the Locker Room for the playing of our National Anthem is as disrespectful to our country as kneeling. Sorry!” 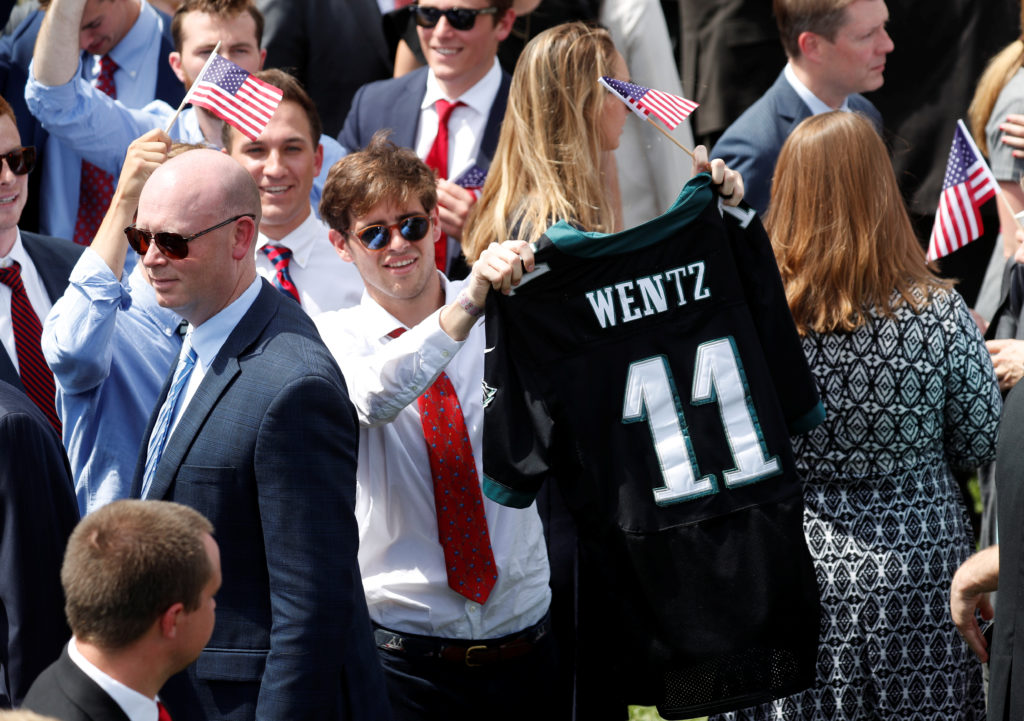 A guest holds up the NFL jersey of Philadelphia Eagles quarterback Carson Wentz at President Donald Trump’s “celebration of America” event on the South Lawn of the White House on June 5, 2018. Photo by REUTERS/Kevin Lamarque

Trump held a patriotic rally on Tuesday instead, where he said in a speech that he thought it was time to “explain why young Americans stand for our national anthem.”

Trump noted on Twitter that other championship sports teams had attended celebrations at the White House since he took office. It’s also true that the practice of skipping the White House event isn’t new; individual players have opted out of the ceremonies, both under Trump and other past presidents, including Barack Obama. But Trump has zeroed in on the issue with unprecedented zeal.

“Given all the things that we have going on in the world right now that require the president’s attention, his focus on the football story is surprising,” said Janice Todd, the president of the North American Society for Sport History.

The spat did not go unnoticed by athletes in other sports, either. On Tuesday, LeBron James, Stephen Curry and other players on the Cleveland Cavaliers and Golden State Warriors, the teams squaring off in this year’s NBA Finals, said they expected that the winner of the series would not attend a White House ceremony.

“No one wants the invite anyway,” James told reporters Tuesday.

If the Warriors — who are ahead in the series two games to none — win a second straight championship this year, it would set up another showdown with Trump. The president disinvited the team last year, after Curry said the Warriors would not visit him in the White House.

The attention on the uproar isn’t necessarily a bad thing, though, Coakley added. Trump’s attacks on the NFL can serve as a teaching moment.

“We can use that as a takeoff point for discussing important ideas” about race and gender that are intertwined with sports, he said. “Talking about this is a good sign. We’re finally having our eyes opened to this myth that sports and politics should always remain separate.”

Left: President Donald Trump participates in a "celebration of America" event on the South Lawn of the White House in Washington on June 5, 2018. The event was arranged after Trump canceled the planned visit of the Super Bowl champion Philadelphia Eagles to the White House. Photo by REUTERS/Carlos Barria