Inside the GOP’s midterm gamble: putting Trump front and center

President Donald Trump plans to play a more active role in the midterm elections than past presidents, with an aggressive travel schedule aimed at boosting Republican candidates as well as his own political agenda, according to sources involved in setting his 2018 campaign plans.

Working with Republican groups outside of the White House, the president’s political advisers are creating a plan to have Trump hold a greater number of midterm campaign rallies and fundraising events than his immediate predecessors, former Presidents Barack Obama and George W. Bush, who both took a more cautious approach to campaigning in midterm elections when they were in office.

Trump will start traveling more for the midterms after Labor Day, when the general elections begin in earnest, and will also increase his media appearances to build support for Republican candidates running for office, several people involved in the planning said. Republican officials hope to finalize Trump’s campaign blueprint by the end of July.

The emerging midterm strategy is the result of a monthslong process that started over the winter, when White House political advisers began meeting quietly with officials from the Republican National Committee and the GOP House and Senate campaign organizations.

“The RNC is working closely with the White House, the Trump campaign and our sister committees to get the president in front of as many voters as possible,” Cassie Smedile, the press secretary for the Republican National Committee, said.

Matt Gorman, a spokesperson for the National Republican Congressional Committee, the House GOP’s campaign arm, said the group “is in constant touch with the White House.”

The ongoing talks have focused on what the party needs to do to retain control of Congress. At the same time, they have also centered on how best to deploy a president who is immensely popular with his base, but who remains strongly disliked by Democrats and some independents.

Preparing a midterm game plan for a president isn’t new. But the attention to detail is an indication of how seriously Trump’s political team is taking the midterms. The disciplined focus on domestic politics also stands in contrast with Trump’s more freewheeling approach to foreign policy, which was on display during the president’s European tour last week and his summit Monday with Russian President Vladimir Putin.

It’s an open question where Trump would make the most impact on the ground. Ten Senate Democrats are up for re-election this year in states that Trump carried in 2016, making them prime targets. On the House side, party officials have debated whether Trump should stick to safe races, or wade into competitive ones as well — including left-leaning suburban districts that could determine control of the lower chamber.

The attention to detail is an indication of how seriously Trump’s political team is taking the midterms.

Several officials acknowledged privately, however, that the final decision on Trump’s campaign travel will be up to the White House, and, ultimately, to the president himself.

The White House will consider requests from individual campaigns and the RNC for Trump to stump for specific candidates, according to a White House official who spoke on background to discuss the midterm planning. But a greater emphasis will be placed on internal data about the elections and the president’s own political agenda, the official said.

Weighing precedent on both sides of the aisle

To prepare for the upcoming elections, Republican officials at the White House and RNC have closely studied Bush’s approach to the midterms of 2002 and 2006, and Obama’s strategy in 2010 and 2014, the White House official and others familiar with the process said. (Republicans gained seats in Congress in 2002, but suffered a net loss in 2006; Democrats lost House and Senate seats in both midterms under Obama).

The president’s political team and Republican officials outside the White House have been “very thoughtful in looking ahead to the last two months of the cycle, and what Trump’s predecessors have done on both sides of the aisle,” said Matt Mackowiak, a Republican strategist.

Republican midterm planners have looked at Bush and Obama’s ratio of midterm campaign speeches to private fundraisers, in an effort to find the right balance for Trump in 2018. They have also studied recent midterms to gauge how often Bush and Obama campaigned in states and individual House districts where voters disapproved of their job performance and policies. 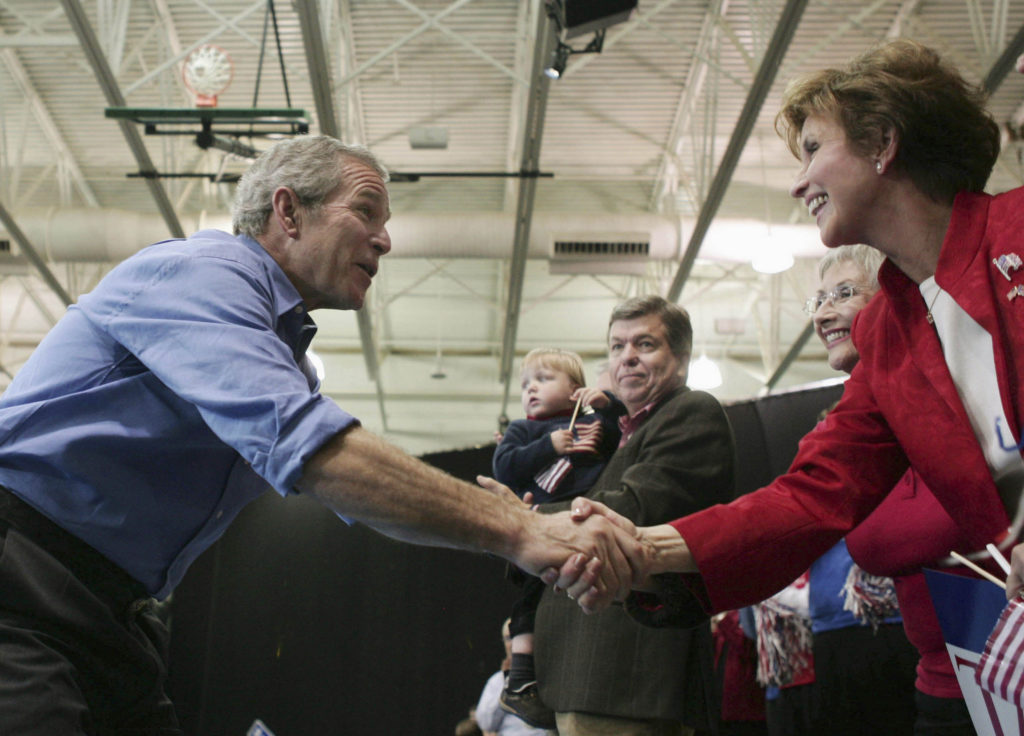 Other aspects of Bush and Obama’s approach to the midterms have been scrutinized as well, including how their political travel was scheduled on days that were devoted to campaigning.

In order to make the most of Trump’s time on the campaign trail this fall, a source familiar with the planning process said, the White House political team and outside Republican groups have considered details such as starting a day of campaigning on the East Coast and traveling west as the day goes on, a scheduling trick that would take advantage of the time difference and allow Trump to make as many campaign stops as possible.

“If you can take any lessons from both Bush and Obama, they felt an obligation to be the primary spokesmen for their party” during the midterms, said Tom Daschle, a former Democratic Senate Majority Leader and close Obama ally during the 2008 election. “They both were very aggressive in offering themselves to competitive races around the country.”

But others noted that Trump’s predecessors were willing to stay away from races where their appearance alongside a candidate seemed likely to hurt the candidate’s chances of winning.

Terry Holt, who served as the national spokesman for Bush’s 2004 reelection campaign and also worked on the Bush-era midterms, said Bush listened to aides when they told him not to campaign in a particular state or House district because he was unpopular there.

“There was really no ego involved in his decision making around his political schedule,” Holt said of Bush. Bush “wanted to make sure that where he went mattered, and if he was going to do it, it would move the needle in favor of the candidate. If it wasn’t, he had no interest in going.”

Will Trump stick to the plan?

With the president and his political aides having the final say in his involvement in the midterms, it remains to be seen how closely Trump will follow the midterm strategy party officials settle on in the coming weeks.

Trump is known for ignoring his advisers and trusting his own instincts when it comes to politics, sometimes to his detriment. Last year, Trump supported Roy Moore, a conservative former state judge running for an open Senate seat in Alabama. Trump stuck with Moore even after he was accused of sexual misconduct and Republican leaders in Congress opposed his candidacy.

Moore lost the election, a defeat that was widely seen as a rebuke of Trump. The president has backed other losing Republican candidates as well, including one who lost a high-profile special election for a House seat in Pennsylvania in March.

This year, Trump has continued his practice of speaking out on politics in unusually blunt terms for a president, whether on Twitter or in his campaign-style speeches. At a rally in Montana last month, Trump attacked Sen. Elizabeth Warren, D-Mass. — who is up for reelection this year and is considered a leading Democratic contender for the White House in 2020 — by questioning her claims of Native American heritage. 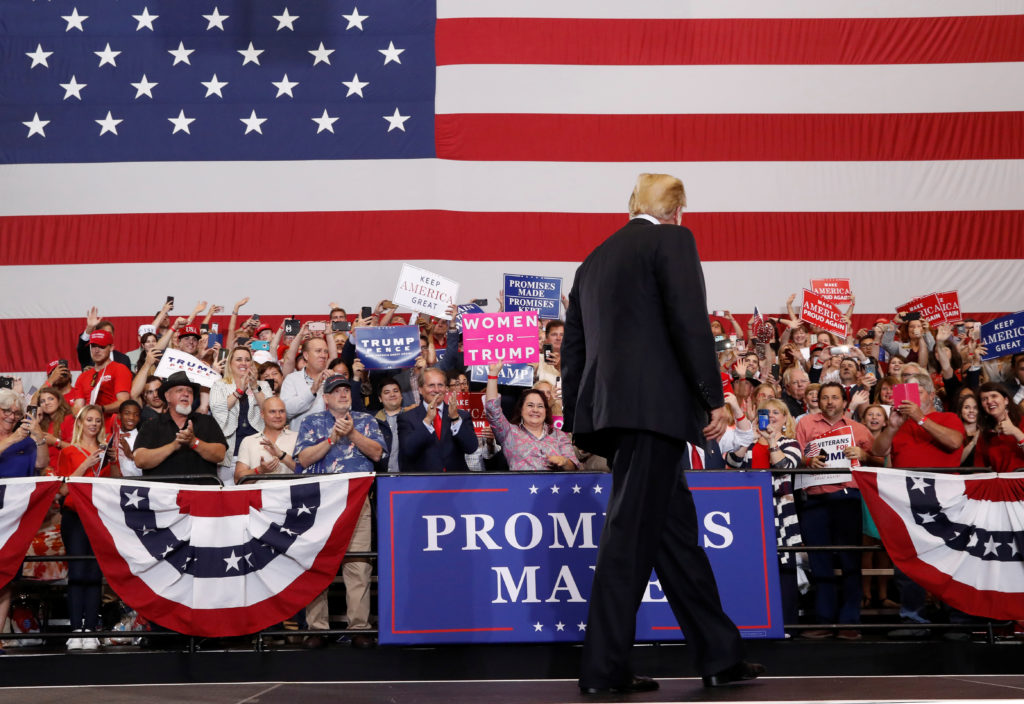 In the speech, Trump used his derisive “Pocahontas” nickname for Warren, while also appearing to mock the #MeToo movement. Trump has lashed out at other Democrats as well, among them Sen. Jon Tester of Montana, who is also running for reelection this fall.

Yet at other times the president has struck a more measured tone in discussing the midterms. Recently, Trump has endorsed several Republican congressional candidates using restrained, formulaic messages on Twitter — including Rep. Martha Roby, who won a Republican primary runoff in Alabama on Tuesday. The endorsements praised the candidates’ positions on crime, taxes and immigration, and lacked Trump’s trademark combativeness on social media.

Mackowiak, echoing the view of many Republican political consultants, said he hoped Trump would be a slightly more conventional campaigner-in-chief this fall. “I certainly wish he was a little bit more careful with what he says,” Mackowiak said. But playing it safe might not generate enough enthusiasm among Trump’s base, he added.

Trump “is going to need to fire up and turn out his voters,” he said. “This is one of the most important questions about the midterms. Will Trump voters turn out if he’s not on the ticket?”

Trump is known for ignoring his advisers and trusting his own instincts when it comes to politics, sometimes to his detriment.

Another key question is whether Trump can keep voters focused on his record — including his nomination of Brett Kavanaugh to the Supreme Court — and not on the distractions swirling around the White House.

Trump’s inability to control the news cycle was underscored last week when Special Counsel Robert Mueller’s investigation indicted 12 Russian officials for interfering in the 2016 election. The charges focused fresh attention on Mueller’s Russia probe, which Trump has repeatedly dismissed as a “witch hunt.”

The president sparked a media firestorm days later, when he refused to say at his joint press conference with Putin that he believed the U.S. intelligence agencies’ conclusion that Russia meddled in the election. Facing intense criticism from Republican lawmakers and allies, Trump walked the comments back Tuesday, but the reversal helped keep the story and negative headlines in the spotlight.

Linda Ackerman, a former Republican National Committeewoman from California, argued that most Republican voters would likely ignore the controversies surrounding Trump. “Republicans are supportive of most of his issues,” Ackerman said. “As we get closer to the November election, you will see, I believe, more requests” from candidates for Trump to campaign on their behalf.

After Labor Day, Republican candidates may see Trump start showing up whether they asked for him or not.