The massive crowds greeting the couple as they stepped off Air Force One. The pink suit and matching pillbox hat. The red roses. The motorcade.

Then, the shots. The shock. The boy saluting his father’s casket. The grieving widow dressed in all black — a parallel for the pain and loss of the nation.

Fifty-three years after JFK’s assassination, the events of that week have been seared into Americans’ minds through videos and photographs. So has the woman at the center of those events, Jacqueline Kennedy.

“We still see her as this almost mythic character,” said Lisa Kathleen Graddy, the curator of the first ladies collection at the National Museum of American History. “Some of that is because she was so private. We really don’t know a lot of what she was thinking, so she becomes an iconic figure that everyone can put their own ideas on.”

A new film “Jackie,” which opens in theaters Friday, aims to shed fresh light on this elusive First Lady.

The movie, on its surface, portrays Jackie Kennedy in the days after the assassination in Dallas. Underneath, it lays bare a wife’s struggle to preserve her husband’s legacy.

Natalie Portman, who plays Jackie, mimics the first lady’s proper way of speaking but also branches out beyond her public image as American royalty. 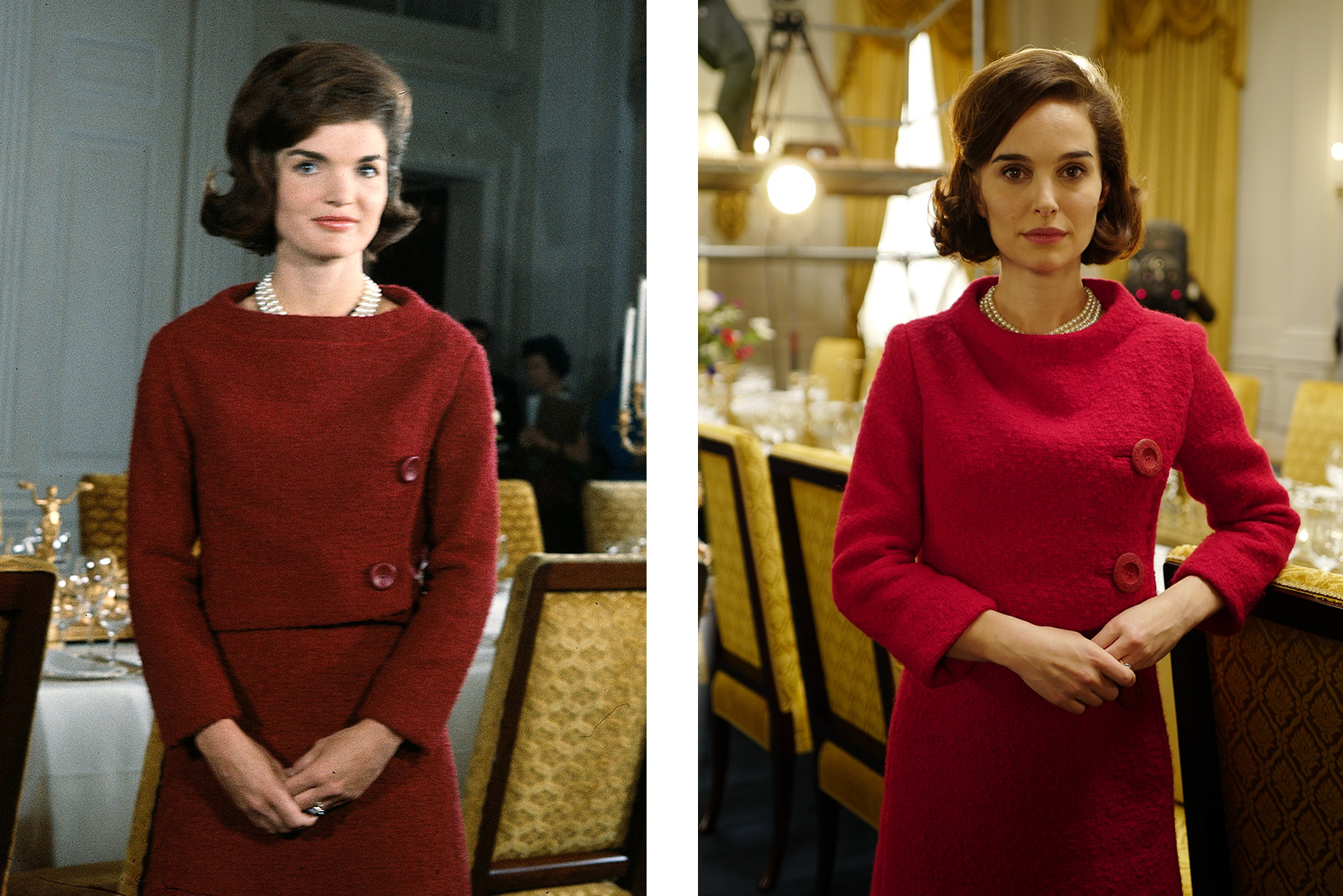 “It shows such a raw, distraught Jacqueline Kennedy,” Graddy, who watched the film before its wide release, said. “There are snippets about how she is dazed on the plane [after the assassination] and she has to pull herself together. You really get this view of a shattered woman.”

In addition to keeping her own life together, Jacqueline Kennedy did everything she could to make sure JFK was not forgotten. The movie shows, for example, how she meticulously planned Kennedy’s funeral to mirror another great American president.

“There was a strong idea that John F. Kennedy was a modern-day Abraham Lincoln,” said James Piereson, a senior fellow at the conservative think tank, the Manhattan Institute.

Piereson, who wrote a book on the aftermath of the Kennedy assassination, credits Jackie with burnishing Kennedy’s civil rights legacy. Though it is now believed that Kennedy’s assassin was motivated by Cold War politics, in the years immediately after Kennedy’s death, many Americans believed that Lee Harvey Oswald was primarily driven by racism and his opposition to the president’s support for civil rights.

Jackie Kennedy also played a role in crafting her husband’s story in an interview she gave to Life magazine’s Theodore H. White, when she likened his time in office to the story of King Arthur and his castle, Camelot.

“The Arthurian idea was that John F. Kennedy was a peacemaker, able to transcend global fights,” Piereson said.

Kennedy was well-liked in his own country and around the world. The February before he died, he enjoyed a 70 percent approval rating. 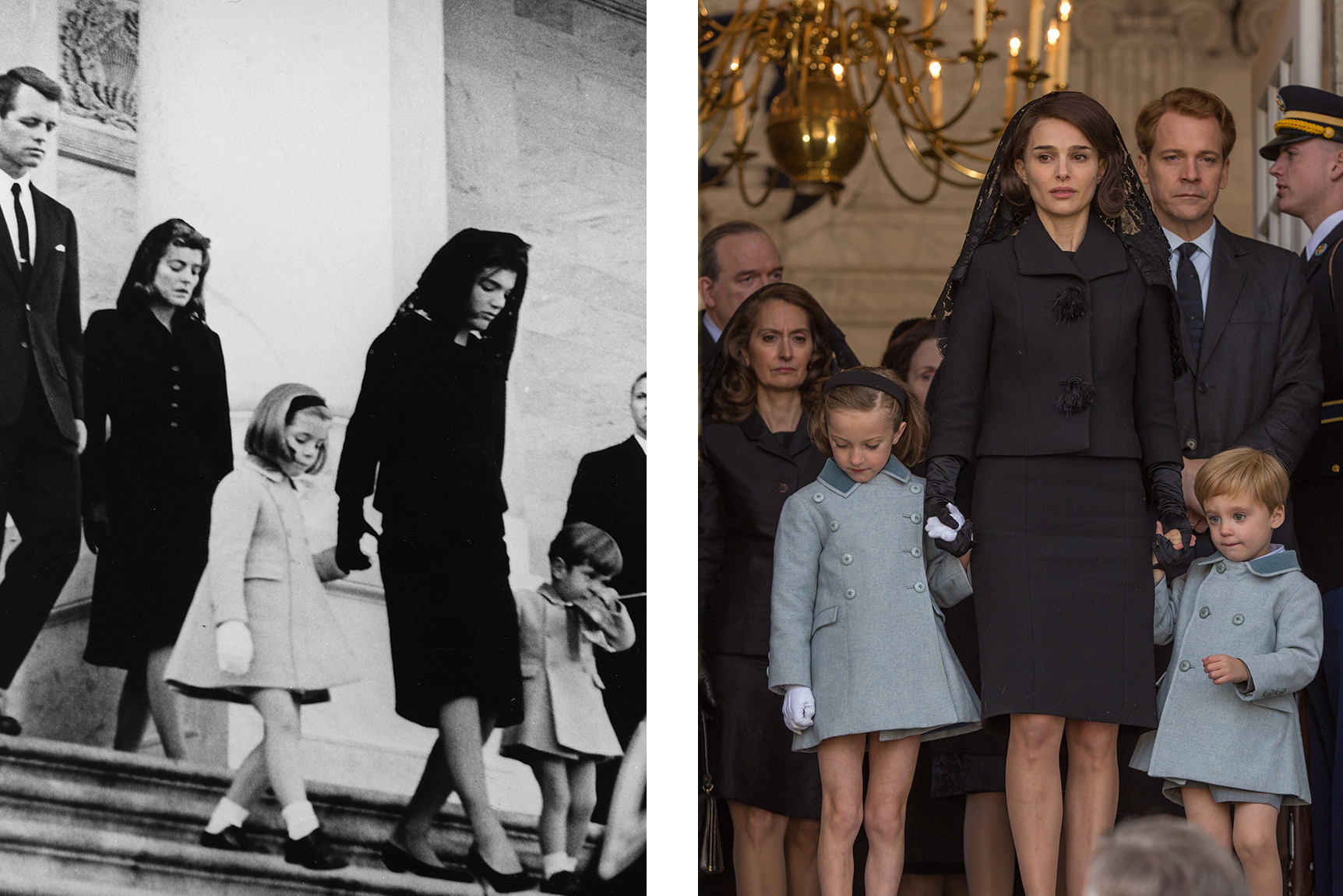 Left: The Kennedy family leaves the Capitol after a ceremony following JFK’s death. Photo by Abbie Rowe White House Photographs
Right: “The movie portrays the struggle that Mrs. Kennedy must have felt between playing this public role of the first lady, standing strong for the nation, and a grieving widow protecting her children and herself,” said Lisa Kathleen Graddy, the curator of the first lady’s collection at the National Museum of American History. Photo by William Gray. © 2016 Twentieth Century Fox Film Corporation All Rights Reserved

But he was also heavily criticized for the failed Bay of Pigs operation to overthrow Fidel Castro, and many of the goals he set out, such as putting a man on the moon or the signing of the Civil Rights Act, were not accomplished during his presidency.

The film does not shy away from these challenges. At one point, Bobby Kennedy, one of JFK’s brothers and his attorney general, laments to Jackie that all they will be remembered for is being “beautiful people.”

Though “Jackie” is one of many Hollywood representations of the Kennedys, it could influence a new generation’s view of the former first lady.

“Film helps us get a visual of history,” said Michelle Pautz, an associate professor at the University of Dayton who studies how government is portrayed in films. “We weren’t there, but we feel like we were there.”

About one-fourth of the people who watched recent movies that depicted historical events (such as Argo or Zero Dark Thirty), changed their opinions, Pautz found in a study she conducted in 2014. Moviegoers are open to being influenced, Pautz said.

“Most of us let our guard down when we go to a movie,” Pautz said. “It’s different than reading the news or even watching a documentary.”

And because the vast majority of people who will watch “Jackie” were not alive when the events took place, audiences are more likely to be a blank canvas on which Hollywood can paint its magic.