Author and journalist James Risen bores into the many costs of the so-called “War on Terror” in his new book “Pay Any Price: Greed, Power, and Endless War,” out Tuesday. The toll is a heavy one in Risen’s telling — he weaves a tale of companies (and con-men) working the government contracting system to enrich themselves; of operations gone awry in the quest to prevent another 9/11; of lives wrecked by post-traumatic stress and of whistleblowers silenced. 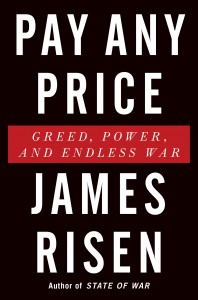 But it was his 2006 book, “State of War,” that contained a revelation that has brought the veteran New York Times investigative reporter to the point where his own freedom is in jeopardy. Risen wrote in that book of an intelligence operation codenamed “Merlin” that was designed to stymie Iran’s nuclear weapons program by having a middle man sell deliberately-flawed weapons blueprints to the Islamic Republic. Risen’s revelation led to a leak investigation by the Department of Justice, and he was eventually subpoenaed in 2008 to testify against the suspected leaker, Jeffrey Sterling, a former CIA official. Sterling was indicted for violating the Espionage Act for allegedly disclosing the program’s existence to Risen.

Earlier this summer, Risen’s effort to avoid testifying was denied by the U.S. Supreme Court. The U.S. Court of Appeals for the Fourth Circuit in Richmond had reversed a lower court ruling quashing the subpoena, and told the reporter he must testify against Sterling. The Supreme Court rejected Risen’s appeal, setting up a potential contempt citation — and possible jail time — for continued refusal to testify. However Attorney General Eric Holder has said journalists should never be jailed for their work. And on Friday, federal prosecutors said in court that the Risen subpoena may face a new review under recently-issued Administration guidelines.

Judy Woodruff sat down with Risen to discuss his new book, but in this online special, he speaks about his case and his thoughts on the Obama Administration’s latest prosecution of the age-old war against leaks.

You can watch Risen’s full interview on Monday’s PBS NewsHour.

Morgan Till is the Senior Producer for Foreign Affairs and Defense (Foreign Editor) at the PBS NewsHour, a position he has held since late 2015. He was for many years the lead foreign affairs producer for the program, traveling frequently to report on war, revolution, natural disasters and overseas politics. During his seven years in that position he reported from – among other places - Iraq, Afghanistan, Pakistan, Syria, Lebanon, Turkey, Egypt, Israel, Palestine, Ukraine, Russia, Georgia, Haiti, South Korea, Brazil, Mexico, Canada and widely throughout Europe.