UZHHOROD, Ukraine (AP) — Jill Biden made an unannounced visit to western Ukraine on Sunday, holding a surprise Mother’s Day meeting with first lady Olena Zelenska to show U.S. support for the embattled nation as Russia presses its punishing war in the eastern regions.

Biden traveled under the cloak of secrecy, becoming the latest high-profile American to enter Ukraine during its 10-week-old conflict with Russia.

“I wanted to come on Mother’s Day,” the U.S. first lady told Zelenska. “I thought it was important to show the Ukrainian people that this war has to stop and this war has been brutal and that the people of the United States stand with the people of Ukraine.”

Biden spent about two hours in Ukraine, traveling by vehicle to the town of Uzhhorod, about a 10-minute drive from a Slovakian border village where she had toured a border processing facility.

Zelenska thanked Biden for her “courageous act” and said, “We understand what it takes for the U.S. first lady to come here during a war when military actions are taking place every day, where the air sirens are happening every day — even today.”

The two first ladies came together in a small classroom, sitting across a table from one another and greeting each other in front of reporters before they met in private. Zelenska and her children have been at an undisclosed location for their safety.

The school where they met has been turned into transitional housing for Ukrainian migrants from elsewhere in the country.

The visit allowed Biden to conduct the kind of personal diplomacy that her husband would like to be doing himself.

President Joe Biden said during his visit to Poland in March that he was disappointed he could not visit Ukraine to see conditions “firsthand” but that he was not allowed, likely due to security reasons. The White House said as recently as last week that the president “would love to visit” but there were no plans for him to do so at this time.

The meeting came about after the two first ladies exchanged correspondence in recent weeks, according to U.S. officials who declined to provide further details because they were not authorized to discuss the ladies’ private communications.

As she arrived at the school, Biden, who was wearing a Mother’s Day corsage that was a gift from her husband, embraced Zelenska and presented her with a bouquet. After their private meeting, the two joined a group of children who live at the school in making tissue-paper bears to give as Mother’s Day gifts. 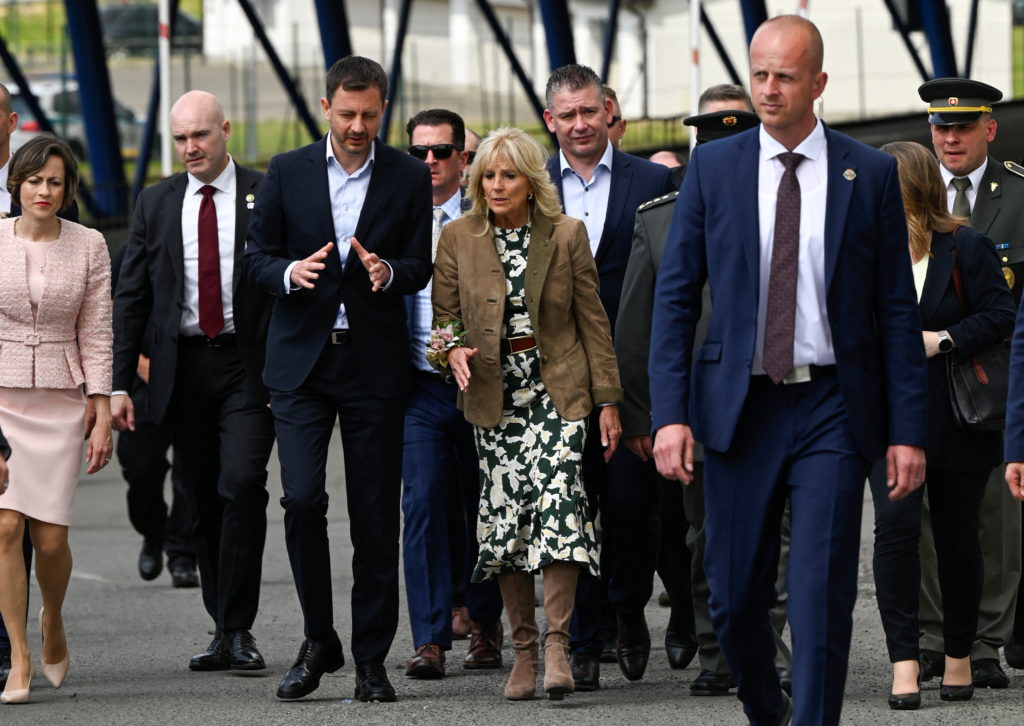 Biden’s visit follows recent stops in the war-torn country by U.S. House Speaker Nancy Pelosi and other members of Congress, as well as a joint trip by U.S. Secretary of State Antony Blinken and U.S. Defense Secretary Lloyd Austin to meet with President Volodymyr Zelenskyy in Kyiv.

Her visit was limited to western Ukraine; Russia is concentrating its military power in eastern Ukraine, and she was not in harm’s way. On the same day as Biden’s visit, a Russian bomb flattened a school in eastern Ukraine that had been sheltering about 90 people in its basement, with dozens feared dead. Also Sunday, Canadian Prime Minister Justin Trudeau visited Ukraine to meet with the president and “reaffirm Canada’s unwavering support for the Ukrainian people,” according to his office.

Earlier, in the Slovakian border village of Vysne Nemecke, she toured its border processing facility, surveying operations set up by the United Nations and other relief organizations to assist Ukrainians seeking refuge. Biden attended a religious service in a tent set up as a chapel, where a priest intoned, “We pray for the people of Ukraine.”

And before that, in Kosice, Biden met and offered support to Ukrainian mothers in Slovakia who have been displaced by Russia’s war. She assured them that the “hearts of the American people” are behind them.

At a bus station in the city that is now a 24-hour refugee processing center, Biden found herself in an extended conversation with a Ukrainian woman who said she struggles to explain the war to her three children because she cannot understand it herself.

“I cannot explain because I don’t know myself and I’m a teacher,” Victorie Kutocha, who had her arms around her 7-year-old daughter, Yulie, told Biden.

At one point, Kutocha asked, “Why?” seeming to seek an explanation for Russia’s decision to invade Ukraine on Feb. 24.

’It’s so hard to understand,” the first lady replied.

The 24-hour facility is one of six refugee centers in Slovakia, providing an average of 300 to 350 people daily with food, showers, clothing, emergency on-site accommodations and other services, according to information provided by the White House.

Biden also dropped in at a Slovakian public school that has taken in displaced students.

Slovakian and Ukrainian moms were brought together at the school for a Mother’s Day event while their children made crafts to give them as gifts.

Biden went from table to table meeting the mothers and kids. She told some of the women that she wanted to come and ” say the hearts of the American people are with the mothers of Ukraine.”

“I just wanted to come and show you our support,” she said before departing for Vysne Nemecke.

In recent weeks border crossings are averaging less than 2,000 per day, down from over 10,000 per day immediately after Russia’s invasion on Feb. 24, and a large portion of that flow is daily cross border traffic.

Biden is on a four-day visit to Eastern Europe to highlight U.S. support for Ukrainian refugees and for the allied countries such as Romania and Slovakia that are providing a safe haven for them.

She spent Friday and Saturday in Romania, visiting with U.S. troops and meeting with Ukrainian refugee mothers and children.

With her trip, the American first lady followed the path of prior sitting first ladies who also traveled to war or conflict zones.

Hillary Clinton visited a combat zone, stopping in Bosnia in 1996. Four years after the 9/11 terrorist attacks and during the U.S.-led war in Afghanistan, Laura Bush went to Kabul in 2005 and Melania Trump accompanied President Donald Trump to Iraq in December 2018.