Trump’s son-in-law and adviser Jared Kushner returned to Capitol Hill for a second day of private meetings, this time for a closed-door conversation with lawmakers on the House Intelligence Committee.

Manafort provided the committee with contemporaneous notes from a Trump Tower meeting last year that has invited congressional scrutiny, according to a person familiar with the investigation who demanded anonymity to discuss the private workings of the investigation.

Both Manafort and Kushner have faced scrutiny about attending the meeting because it was described in emails to Donald Trump Jr. as part of a Russian government effort to aid Trump’s presidential campaign.

White House Senior Adviser Jared Kushner did something on Monday he rarely does: speak to reporters. The president’s son-in-law offered both denial and defense in his public statement after testifying privately to the Senate Intelligence Committee on matters relating to the Russia investigation. Nick Schifrin joins Judy Woodruff to examine what we know and what key questions remain.

Kushner on Monday answered questions from staff on the Senate’s intelligence panel, acknowledging four meetings with Russians during and after Trump’s victorious White House bid and insisting he had “nothing to hide.” He emerged smiling to publicly declare, “All of my actions were proper.”

A quiet insider who generally avoids the spotlight, Kushner is the first top Trump lieutenant to be quizzed by the congressional investigators probing Russia’s meddling in the 2016 presidential election.

Hours before the Senate meeting, Kushner released an 11-page statement that was billed as his remarks to both the Senate and House committees. In it, he acknowledged his Russian contacts during the campaign and then the following weeks, in which he served as a liaison between the transition and foreign governments. He described each contact as either insignificant or routine and he said the meetings, along with several others, were omitted from his security clearance form because of an aide’s error. Kushner cast himself as a political novice learning in real time to juggle “thousands of meetings and interactions” in a fast-paced campaign.

“Let me be very clear,” Kushner said afterward in a rare public statement at the White House. “I did not collude with Russia, nor do I know of anyone else in the campaign who did so.”

Kushner’s statement was the first detailed defense from a campaign insider responding to the controversy that has all but consumed the first six months of Trump’s presidency. U.S. intelligence agencies have concluded that Russia sought to tip the 2016 campaign in Trump’s favor. Congressional committees, as well as a Justice Department special counsel, are investigating whether Trump associates coordinated with Russia in that effort and whether the president has sought to hamper the investigations.

Kushner said he “will continue to cooperate as I have nothing to hide.”

Trump tweeted Tuesday that “Jared Kushner did very well yesterday in proving he did not collude with the Russians. Witch Hunt. Next up, 11 year old Barron Trump!”

Meanwhile, Republican Sen. Chuck Grassley and Democratic Sen. Dianne Feinstein announced they issued a subpoena for Manafort to testify before the Senate Judiciary Committee at a public hearing on Wednesday. They said they had been unable to reach agreement with Manafort on the terms of a private and voluntary interview with staff. 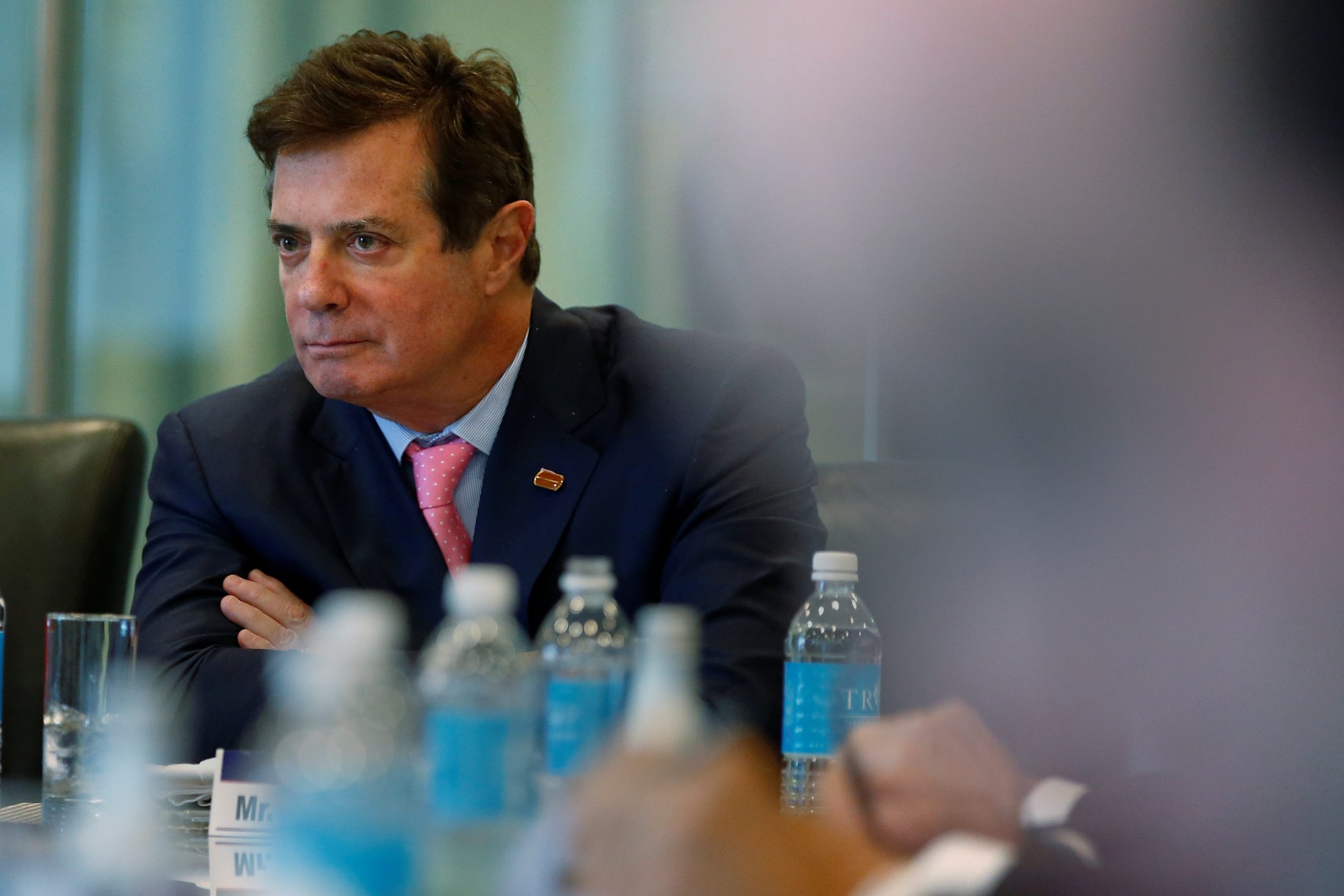 Paul Manafort of Republican presidential nominee Donald Trump’s staff listens during a round table discussion on security at Trump Tower in the Manhattan borough of New York. Photo by Carlo Allegri/Reuters

In addition, the committee was withdrawing a separate subpoena issued for the co-founder of a research firm behind a dossier of allegations about Trump and his ties to Russia. Instead, Glenn Simpson has agreed to a private interview, according to a person familiar with the conversations who spoke on condition of anonymity.

Kushner, in his statement for the two intelligence committees, provided for the first time his recollection of the Trump Tower with a Russian lawyer who was said to have damaging information about Trump’s Democratic rival, Hillary Clinton.

Emails released this month show that the president’s son, Donald Trump Jr., accepted the meeting with the idea that he would receive information as part of a Russian government effort to help Trump’s campaign. But Kushner said he hadn’t seen those emails until recently shown them by his lawyers.

“No part of the meeting I attended included anything about the campaign; there was no follow-up to the meeting that I am aware of; I do not recall how many people were there (or their names), and I have no knowledge of any documents being offered or accepted,” he said.

Kushner also confirmed earlier media reports that he had suggested using Russian diplomatic facilities to set up secure communications between Trump adviser Michael Flynn, who would become Trump’s national security adviser, and Russian officials. But he disputed that it was an effort to establish a “secret back channel.”

His statement describes a December meeting with Flynn and Russian Ambassador Sergey Kislyak in which Kushner and Kislyak discussed establishing a secure line for the Trump transition team and Moscow to communicate about policy in Syria.

Kushner said that when Kislyak asked if there was a secure way for him to provide information from his “generals,” Kushner suggested using facilities at the Russian Embassy.

“The ambassador said that would not be possible and so we all agreed that we would receive this information after the Inauguration. Nothing else occurred,” the statement said.

As for his application for a security clearance, Kushner said his form was submitted prematurely due to a miscommunication with his assistant, who had believed the document was complete.

He said he mistakenly omitted all of his foreign contacts, not just his meetings with Russians, and has worked in the past six months with the FBI to correct the record.

READ MORE: What happened in Jared Kushner’s 4 meetings with Russians?

Left: Senior Adviser to the President Jared Kushner speaks outside the West Wing of the White House in Washington, U.S., July 24, 2017. REUTERS/Joshua Roberts TPX IMAGES OF THE DAY - RTX3CQST