If all Latino millennials voted in 2016, they’d have major sway in the presidential race.

But that will depend on boosting turnout among young voters who make up almost half of the overall Hispanic electorate. This election, 44 percent of eligible Hispanic voters will be millennials between the ages of 18 and 35 years old, according to a new Pew Research Center study.

That’s a larger share of millennials than any other ethnic or racial voting group. The Pew survey found that 35 percent of eligible African American voters in 2016 will be millennials; among Asian Americans the figure is 30 percent, and among whites, 27 percent. 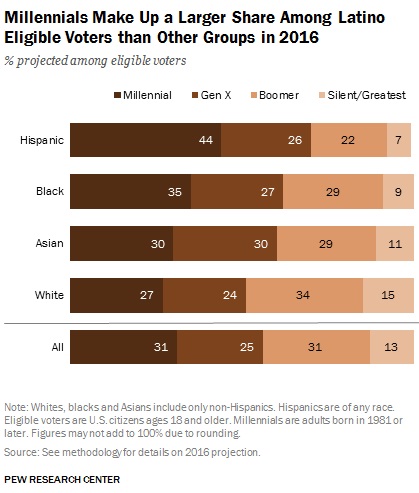 Millennials represent the fastest-growing portion of the Latino electorate. Pew projects that 27.3 million Hispanics will be eligible to vote in 2016, up 17 percent from 2012.

Most of that growth — 3.2 million new eligible voters — turned 18 between the last election and this one, or will turn 18 this year before Election Day. 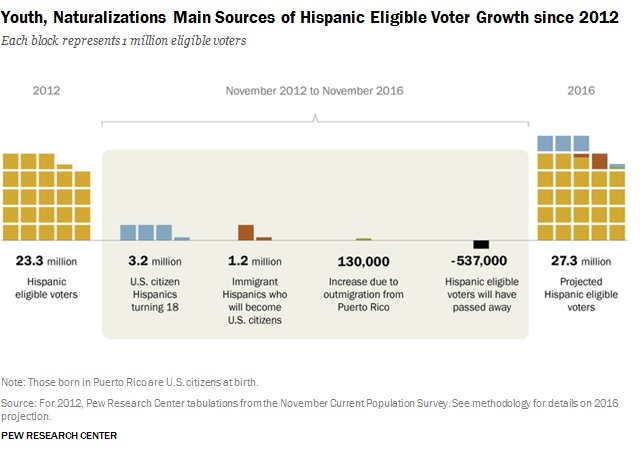 “Even though we’ve had all this growth, to some extent the group that is growing the most is the one that has had the lowest turnout,” said Mark Hugo Lopez, the director of Hispanic research at Pew and one of the study’s co-authors.

This discrepancy has a lot to do with geography. Nearly six in 10 eligible Latino voters live in New York, California and Texas — solidly blue and red states where Pew researchers say it’s harder to boost Latino turnout than it is in the battleground states that decide presidential races.

Hispanics make up 18 percent of the Florida electorate, but account for less than 5 percent of all eligible voters in key toss-up states, including Pennsylvania, Ohio, Virginia, Iowa, North Carolina, and New Hampshire. 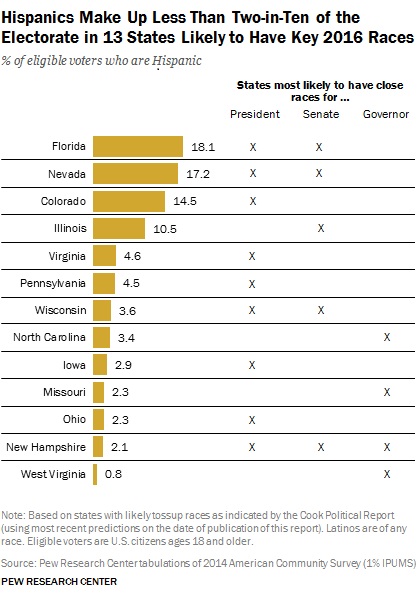 This could change over time, as more Latinos become eligible to vote and the share of Latinos in the U.S. who are foreign-born continues to decline. Pew found that 52 percent of Latinos living in the country are not U.S. citizens, or are still under the age of 18.

Turnout among Latino millennials and older Latino voters could also rise this year if the Republican Party nominates Senators Ted Cruz or Marco Rubio, both of whom are Cuban-American. Rubio put out a new ad yesterday touting his support among millennials, though it didn’t specifically target young Latinos.

But Cruz and Rubio have not focused on their ethnic identity on the campaign trail, despite the fact that both men stand a chance of becoming the nation’s first Hispanic American presidential nominee of a major party.

Cruz and Rubio have also taken conservative positions on immigration reform that have angered Latino advocates pushing for a pathway to citizenship for undocumented workers.

On the Democratic side, Sen. Bernie Sanders has struggled to build support among nonwhite voters. Hillary Clinton leads among Hispanic voters, though her campaign came under attack on social media last month for publishing an article on its website that was originally titled “7 ways Hillary Clinton is Just Like Your Abuela.”

Outreach efforts to Latino voters — including millennials — will likely improve as the campaign goes on. If it doesn’t, candidates will lose out on a crucial voting bloc. Each year, more than 800,000 Latinos become eligible to vote.

“We have at least another two decades of growth like this,” Lopez said. “So this is not a one-time thing.”

Left: Latino leaders and immigration reform supporters gathered at a voter registration rally in Colorado last October. The Latino electorate has the largest share of millennial voters of any racial or ethnic group, but turnout has been low in recent elections. Photo by Evan Semon/REUTERS