WASHINGTON — A trove of Facebook ads made public Wednesday by Congress depicts Russia’s extraordinary cyber intrusion into American life in 2016 aimed at upending the nation’s democratic debate and fomenting discord over such disparate issues as immigration, gun control and politics.

The ads, seen by vast numbers of people, encouraged street demonstrations against Donald Trump and Hillary Clinton and fostered support and opposition to Bernie Sanders, Muslims, gays, blacks and the icons of the Civil Rights movement.

The few dozen ads, a small sampling of the roughly 3,000 Russian-connected ones that Facebook has identified and turned over to Congress, were released amid two consecutive days of tough and sometimes caustic questioning by House and Senate lawmakers about why social media giants hadn’t done more to combat Russian interference on their sites.

The ads underscore how foreign agents sought to sow confusion, anger and discord among Americans through messages on hot-button topics. U.S. intelligence services say the Russian use of social media was part of a broad effort to sway the 2016 presidential election in favor of Trump. Special counsel Robert Mueller is investigating whether the Kremlin worked with the Trump campaign to influence voters.

Many of the ads show careful targeting, with messages geared toward particular audiences. One ad, aimed at those with an interest in civil rights and their leaders, highlights a man who claims to be Bill Clinton’s illegitimate son. Another video parodying Trump was targeted at blacks who also are interested in BlackNews.com, HuffPost Politics or HuffPost Black Voices. It was shown 716 times and got 42 clicks.

Though officials at Facebook and other social media giants were initially reluctant to acknowledge Russian success on their sites in swaying popular opinion, company leaders have struck a different tone in recent weeks and disclosed steps to Congress intended to prevent future meddling by foreign agents.

In preparation for hearings this week, Facebook disclosed that content generated by a Russian group, the Internet Research Agency, potentially reached as many as 126 million users. Company executives said that going forward they would verify political ad buyers in federal elections, requiring them to reveal correct names and locations. The site will also create new graphics where users can click on the ads and find out more about who’s behind them.

“Google has all knowledge that man has ever developed,” the Minnesota Democrat said. “You can’t put together rubles with a political ad and go like, ‘Hmmm, those data points spell out something pretty bad?’ ”

One advertisement cited a real October 2016 news story — about a gunman’s battle with Boston police officers — then used it to attack Hillary Clinton as “the main hardliner against cops” and to promote Trump as the candidate who can “defend the police from terrorists.” It received 761 clicks.

Though U.S. intelligence officials believe the social media effort was aimed at aiding Trump, there are other indications it was intended to sow general divisions.

Though U.S. intelligence officials believe the social media effort was aimed at aiding Trump, there are other indications it was intended to sow general divisions.

One ad promoted a Nov. 12 anti-Trump rally in New York City, titled “Not My President.” Large anti-Trump rallies actually did take place around the country that day in major American cities. That doesn’t mean the Russian accounts planned the events, but rather that they were piggybacking on existing protests and promoting them to like-minded people.

Not all of Russia’s activity was intended to intervene in the election, said Salve Regina University professor James Ludes, who has written on Russia’s influence on the United States.

The ads on divisive issues such as race and gun ownership — or even organizing opposing rallies across the street from each other — are meant to “attack political cohesion” and make Americans turn against one another, he said.

“It’s not intended to benefit once candidate or another per se, but raise political temperature,” Ludes said. “Make us feel like we are coming apart at the seams.” 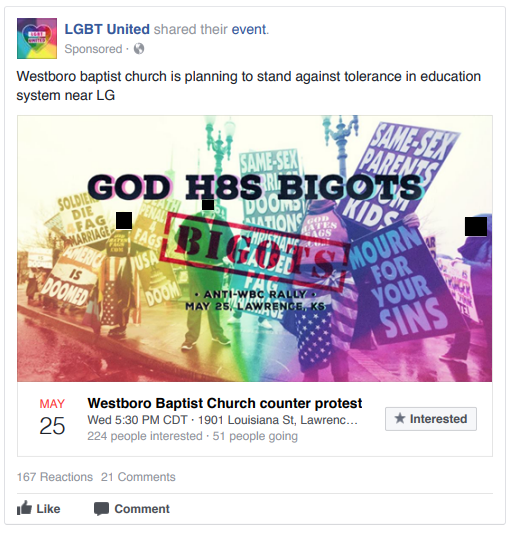 This ad targeted Facebook users between the ages of 14 and 65 in Kansas, who liked a broad range of causes, from Bernie Sanders and Hillary Clinton to same-sex marriage. 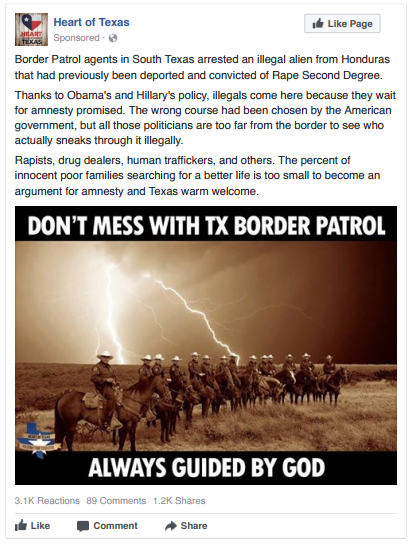 This ad, which ran in early August 2016, targeted anyone who was interested in “independence” or “patriotism,” who spoke English and was between the ages of 18 and 65. 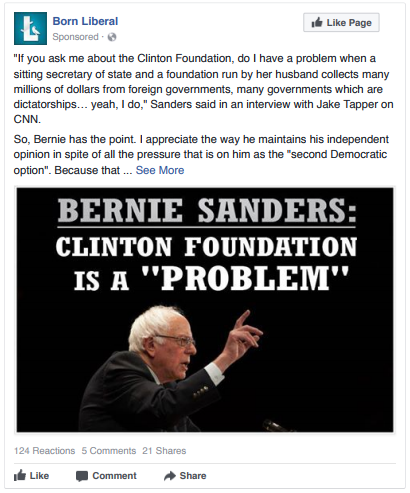 This ad, which ran for two days in early June, targeted Facebook users across the U.S. who were interested in Bernie Sanders. 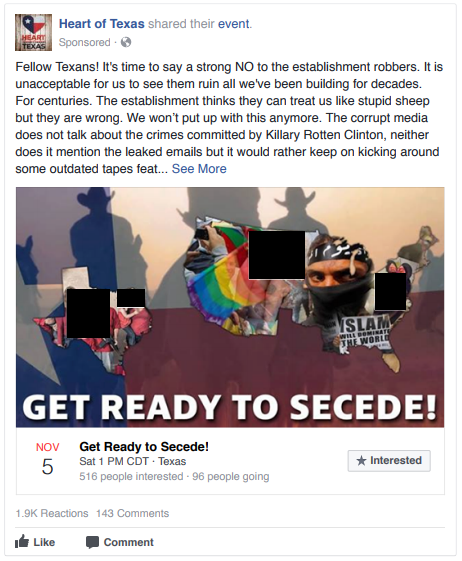 This ad, which ran from late October to early November 2016, targeted Facebook users from 18 to 65 in Texas. 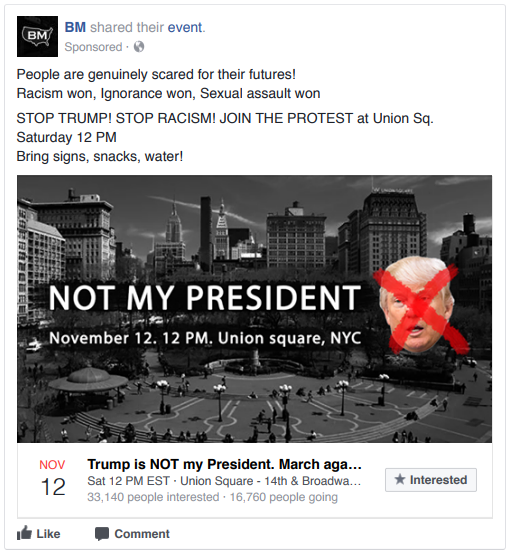 An ad that ran Nov. 9, 2016 by a Russian-linked Facebook group is shown in documents released to the House intelligence committee.