WASHINGTON — Maryland is challenging the appointment of Matthew Whitaker as the new U.S. acting attorney general, arguing that President Donald Trump sidestepped the Constitution and the Justice Department’s own succession plan by elevating Whitaker to the top job.

The Tuesday filing sets up a court challenge between a state and the federal government over the legitimacy of the country’s chief law enforcement officer and foreshadows the likelihood of additional cases that present the same issues.

It comes as Democrats call on Whitaker to recuse himself from overseeing the special counsel’s Russia investigation because of critical comments he has made about it in the past and amid concerns over his views on the scope of judicial authority.

They cite a statute governing the line of succession at the Justice Department that says that in the case of a vacancy in the attorney general position, the deputy attorney general may exercise “all the duties of that office.” If neither is available for the job, according to that statute, then the associate attorney general is supposed to be elevated.

Besides that, the lawyers say, the Constitution requires the duties of the attorney general — who, as a presidential appointee, is known under the law as a “principal” officer — to be carried out only by someone confirmed by the Senate for the underlying position.

The state argues that Congress always intended for an attorney general to be confirmed by the Senate given the national security and criminal justice powers inherent in the position, including the authority to control an investigation into the president. Without an established chain of command, according to the filing, presidents could select and then remove a series of attorneys general until they got their way. 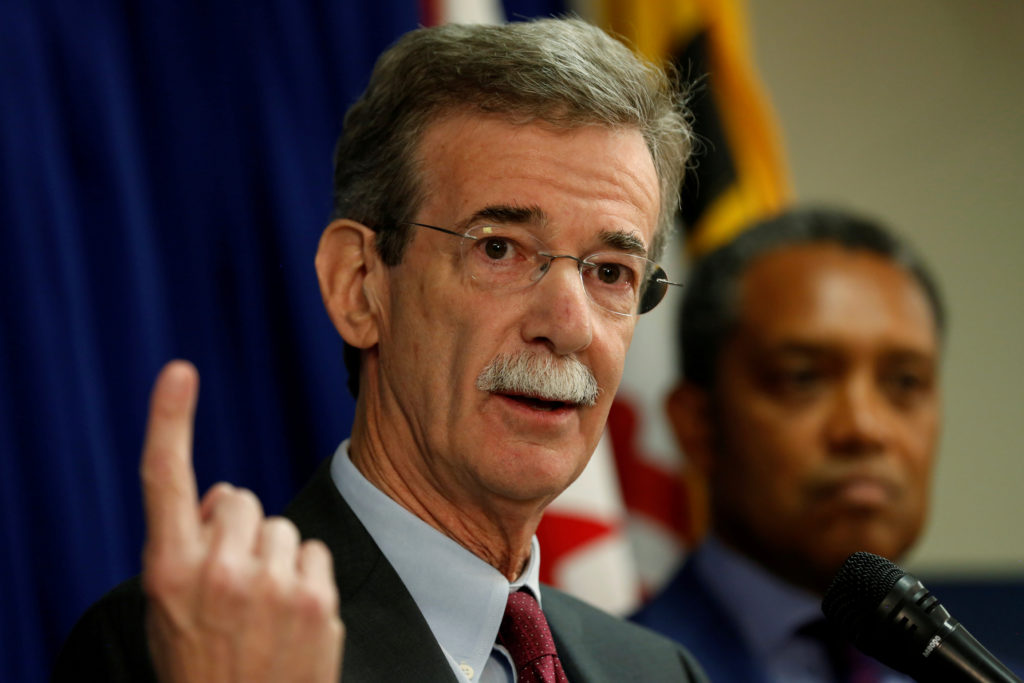 Maryland Attorney General Brian Frosh (L) at a news conference in June 2017, when he announced a lawsuit against U.S. President Donald Trump on the issue of the U.S. Constitution’s emoluments clauses and Trump’s business ventures, in Washington, DC. REUTERS/Jonathan Ernst

“Absent the Attorney General Succession Act, the President could fire the Attorney General (or demand his resignation), then appoint a hand-picked junior Senate-confirmed officer from an entirely different agency, or a carefully selected senior employee who he was confident would terminate or otherwise severely limit the investigation,” the filing states.

A Justice Department spokeswoman had no immediate comment, though the department was expected to release later this week an opinion from its Office of Legal Counsel defending the legitimacy of Whitaker’s appointment.

Whitaker was appointed last year as chief of staff to then-Attorney General Jeff Sessions. He became acting attorney general on Nov. 7 when Sessions was forced out.

The Maryland filing was made Tuesday in a legal dispute with the Trump administration over the Affordable Care Act. That lawsuit names Sessions as an individual defendant.

The state asks the judge to substitute Rosenstein as the defendant in place of Sessions, a move that would effectively declare him the proper attorney general.

The state’s lawyers say that in addition to their concerns over the line of succession, Whitaker has “expressed idiosyncratic views that are inconsistent with longstanding Department of Justice policy.”

They cite his criticism of the landmark Supreme Court opinion Marbury v. Madison, which ensured that courts had authority to strike down laws they considered unconstitutional.

What the acting attorney general thinks of the Mueller probe