Call it Mega Tuesday, Super Tuesday II, or any other name, you can follow all of the PBS NewsHour’s election coverage as people in five states and one U.S. territory vote in presidential primaries on March 15.

12:33 a.m. EDT March 16 | Hillary Clinton has won the Democratic presidential primary in her native state of Illinois. It’s the fourth victory of the night for the former secretary of state over rival Bernie Sanders.

Clinton spoke earlier in the night in Florida, and appeared to pivot ahead toward a possible general election contest against Donald Trump.

She suggested the Republican billionaire was not prepared to make the tough decisions required of a president.

Cruz said at a Houston rally that the battle for the Republican presidential nomination battle was a “two person race” between himself and Donald Trump.

He did not mention Josh Kasich by name but clearly was belittling his chances. Kasich won his home state of Ohio on Tuesday but that has been his only victory of the year.

Cruz has won seven states but still significantly trails Trump in delegates. The Texas Senator claimed that the media was “rooting” for Trump because he is the only candidate Hillary Clinton could beat.

Cruz has yet to win a state on Tuesday though the race in Missouri has not yet been called. — Associated Press

10:36 p.m. EDT | Donald Trump marked his latest string of victories by saying he is bringing new voters to the Republican Party.

Trump said Tuesday during a victory rally at his Mar-a-Lago home in Florida that “something is happening” in the Republican Party that is being noticed “all over the world.”

He touted increased voter turnout and a rise in new voters who have come out to support him.

John Kasich won his first contest of the primary process by taking his home state of Ohio on Tuesday. Ted Cruz has not yet won a state. — Associated Press 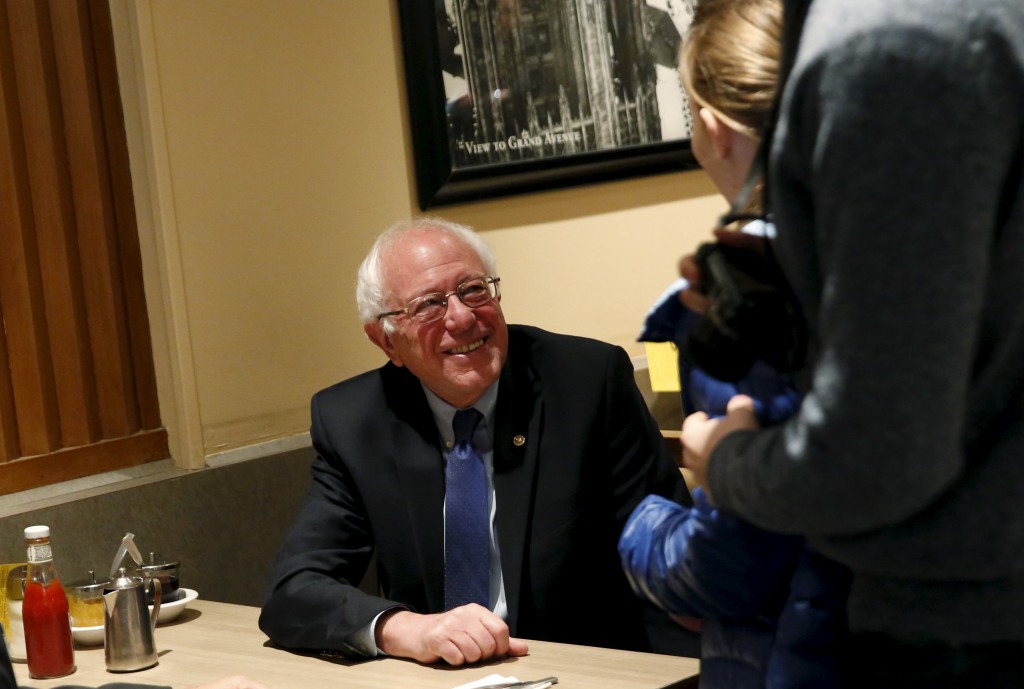 Democratic presidential candidate Bernie Sanders smiles after sitting down for breakfast at Lou Mitchell’s restaurant and bakery in Chicago, Illinois on March 15. Photo by Shannon Stapleton/Reuters

9:41 p.m. EDT | Bernie Sanders was handed three early defeats on Tuesday — but his speech carried little mention of them.

Sanders lost Ohio, Florida and North Carolina to Democratic rival Hillary Clinton, who added to her delegate lead. But, in a speech to supporters in Phoenix, he barely discussed those contests or the day’s races in Illinois or Missouri that have not been called.

Sanders instead delivered his standard campaign speech, decrying the influence of big money in politics. He vowed that “billionaires would have to pay their fair share.”

The Vermont senator has struggled to win the south, instead claiming some victories in the Midwest. — Associated Press 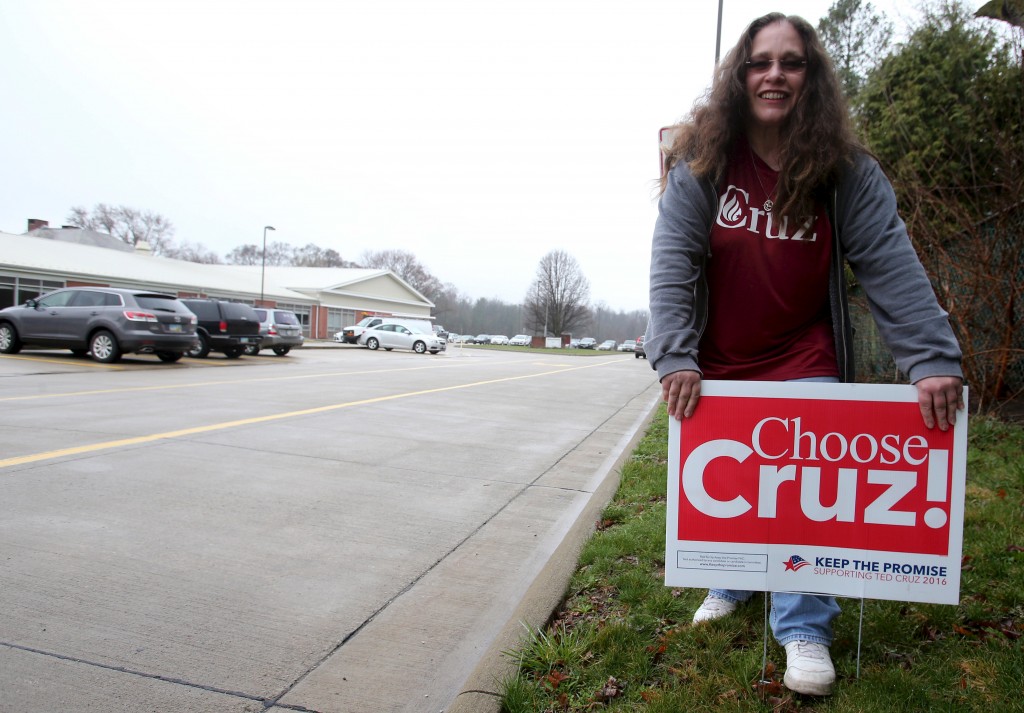 9:40 p.m. EDT | Ted Cruz says his “friend and colleague” Marco Rubio ran “an optimistic campaign focused on the future of our party.”

In a statement released shortly after the Florida senator suspended his presidential campaign, Cruz said he’s certain Rubio will continue to be “a champion for limitless opportunity in America.”

But his campaign was still hoping to pick up delegates in states that award delegates proportionally: Missouri, Illinois and North Carolina.

Cruz has said for weeks he’s the only candidate in the field who can beat Trump one-on-one. — Associated Press

9:26 p.m. EDT | Ohio Gov. John Kasich won the presidential primary in his home state of Ohio on Tuesday. The win means he picked up all 66 of the state’s delegates to the Republican National Convention.

Now all he has to do is win 91 percent of the remaining delegates and he can clinch the nomination before the convention this summer.

Marco Rubio has more delegates than Kasich has, and the Florida senator suspended his campaign Tuesday night.

Donald Trump still leads the race for delegates, with 568. Ted Cruz has 370 delegates, Kasich has 129 and Rubio left the race with 163.

It takes 1,237 delegates to win the Republican nomination for president. — Associated Press

8:42 p.m. EDT | Presidential candidate Hillary Clinton bested Bernie Sanders in Ohio’s Democratic presidential primary, according to the Associated Press. “This is another super Tuesday for our campaign,” she told supporters.

“While it is not God’s plan that I be president in 2016, or maybe ever, and while today my campaign is suspended, the fact that I’ve even come this far is evidence of how special America truly is and all the reason more why we must do all we can to ensure this nation remains a special place,” he said. 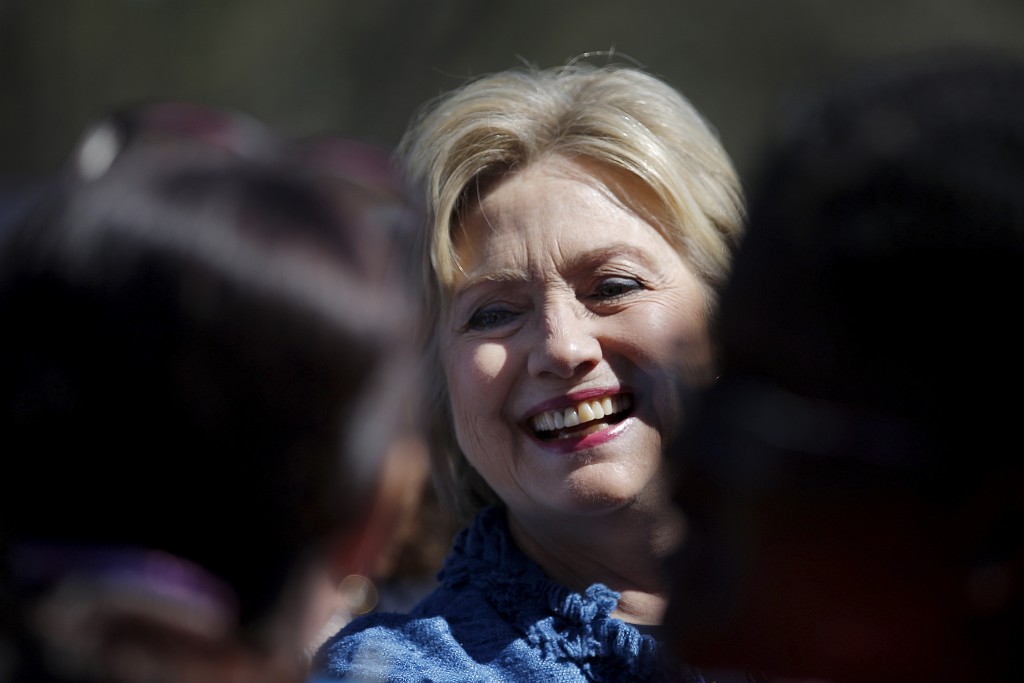 Democratic presidential candidate Hillary Clinton talks to supporters during a campaign stop outside of a polling station in Raleigh, North Carolina on March 15. Photo by Carlos Barria/Reuters

8:15 p.m. EDT | Hillary Clinton has won the North Carolina presidential primary, according to Fox and MSNBC.

8:02 p.m. EDT | Donald Trump and Hillary Clinton have won the presidential primary in Florida, further solidifying their leads in the hotly contested race for the Republican and Democratic nominations.

For Trump, the Republican front-runner, Florida’s all-or-nothing contest represents a momentous win, giving him 99 additional delegates — the largest in the quintet of contests taking place Tuesday. His victory deals a devastating blow to Florida Sen. Marco Rubio, who many in the Republican establishment had backed in the hope of derailing Trump’s dash to the nomination.

Clinton will be awarded delegates proportionally in keeping with Democratic regulations, but the win still catapults her ahead of rival Bernie Sanders, who came into Tuesday’s contests with fresh momentum after scoring big in Michigan last week. — Associated Press

That’s according to early results of exit polls conducted for the Associated Press and television networks for Edison Research.

Only about 4 in 10 Republican voters in each state want all immigrants in the country illegally to be deported.

The proportion of GOP primary voters saying they want a ban on non-citizen Muslims entering the United States is as high as three-quarters in Missouri. — Associated Press 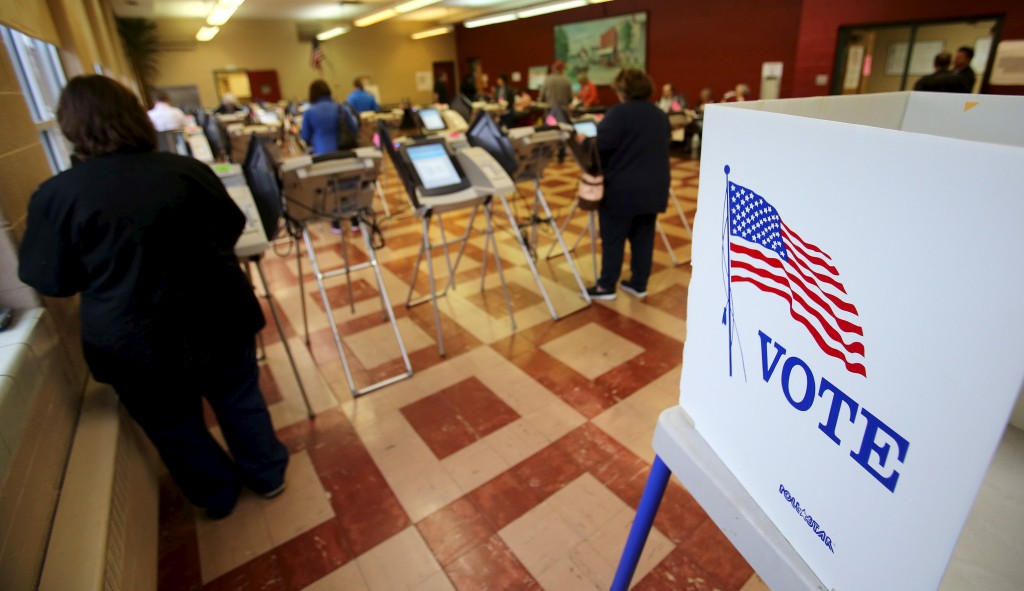 6:53 p.m. EDT | The presidential hopes of two of Donald Trump’s remaining rivals were on the line in five big states voting Tuesday in the wild but winnowing Republican slugfest, while Democrats in those states decided whether Hillary Clinton will be harder to catch.

Ohio Gov. John Kasich and Florida Sen. Marco Rubio fought for home-state victories to stay alive in the 2016 campaign, the governor seeming to have better odds than the senator, though nothing has been coming easily to Trump’s opponents. Ted Cruz, No. 2 in the GOP race, hoped to become the last man standing against Trump.

A strong night for Clinton would blunt Bernie Sanders’ feisty challenge and make her delegate lead closer to unassailable. But the Vermont senator bid for an upset in industrial states like the one that rocked the race in Michigan last week.

Both parties held contests in Ohio, Florida, Missouri, Illinois and North Carolina; the Ohio and Florida primaries were especially crucial for Republicans because all GOP delegates in those big states go to the winner. Trump already triumphed earlier Tuesday in the winner-take-all contest for nine GOP delegates in the Northern Mariana Islands, a U.S. territory. — Calvin Woodward, Associated Press

6:30 p.m. EDT | Five big states — Ohio, Florida, North Carolina, Illinois and Missouri — come to the fore Tuesday night, as the latest round of primary voting promises to either push the front-runners past their dogged opponents or breathe new life into failing campaigns. Watch the PBS NewsHour’s report:

5:10 p.m. EDT | About 9 in 10 Republican primary voters in five states going to the polls Tuesday are unhappy with the direction of the federal government — and on average, about 4 in 10 are angry.

According to early results of exit polls conducted for the Associated Press and television networks by Edison Research, majorities of Republican primary voters in all five states say they feel betrayed by politicians from the Republican Party.

In each of the five states, about half of voters say they prefer a candidate who’s an outsider, while about 4 in 10 want one with political experience. — Associated Press 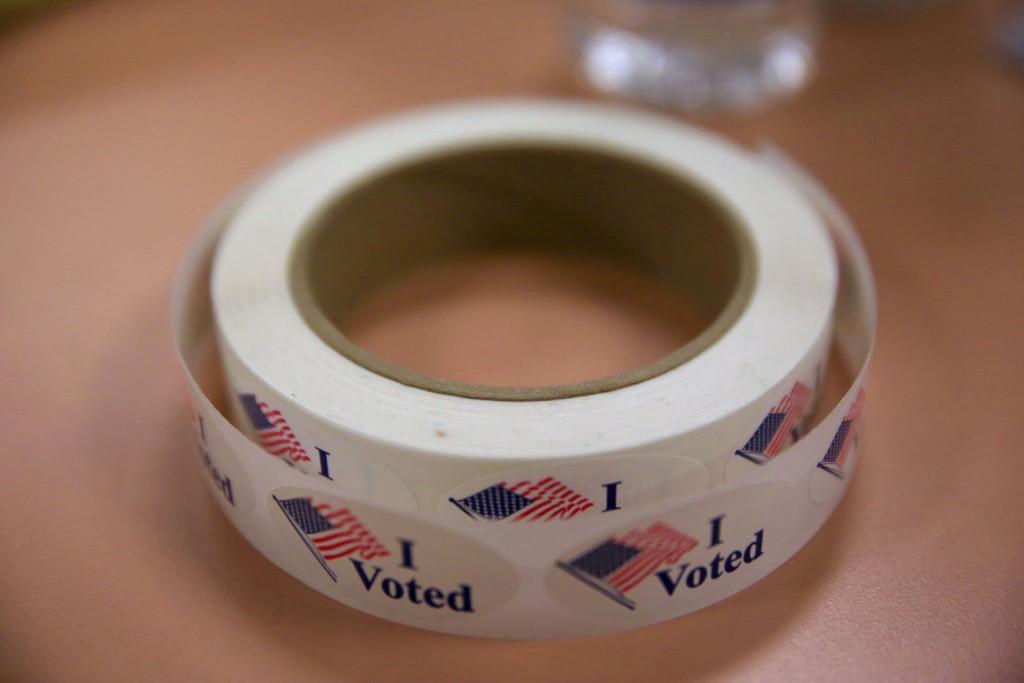 Voting stickers are seen as voters cast their ballots for the Ohio primary at Saint Columba Social Hall in Youngstown, Ohio on March 15. Photo by Aaron P. Bernstein/Reuters

5:05 p.m. EDT | Majorities of Democrats in five states going to the polls Tuesday say they would be satisfied with both candidates as the nominee.

At least half of voters in each state say each of the two candidates’ positions on the issues are “about right,” though voters are generally more likely to say Sanders’ policies are too liberal than not liberal enough and to say the opposite about Clinton.

Democratic voters in all five states see Clinton as the candidate with the better chance to beat Donald Trump if he is the Republican nominee in November. — Associated Press 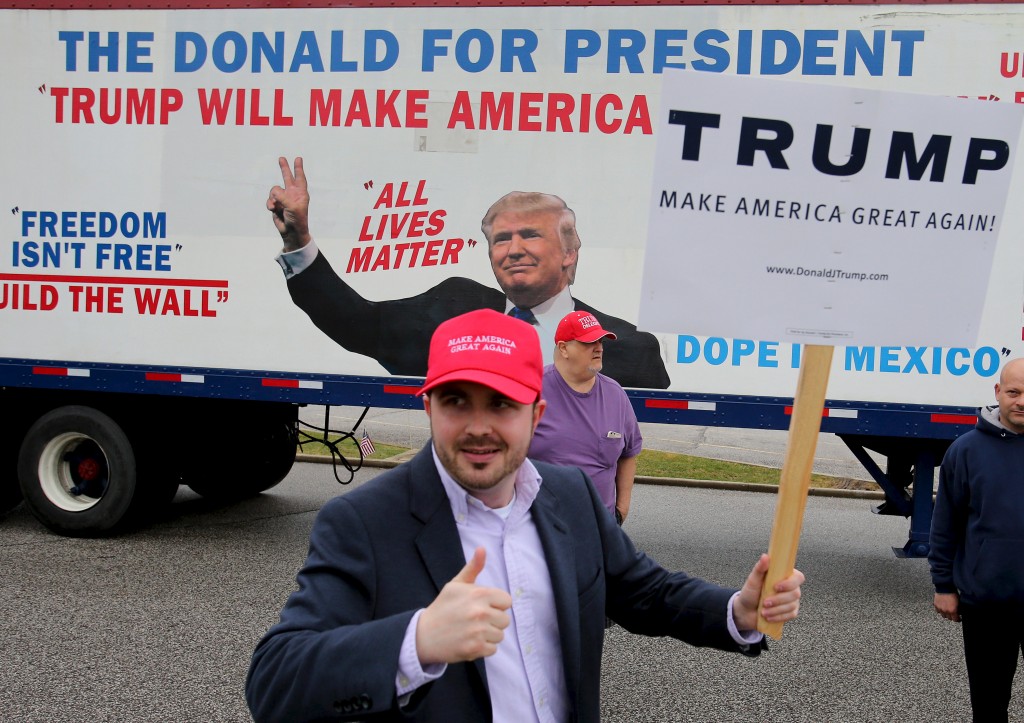 Bob Bolus, a supporter of Republican presidential candidate Donald Trump, gives the thumbs up to drivers as they pass by on Super Tuesday in Middleburg Heights, Ohio on March 15. Photo by Aaron Josefczyk/Reuters

4:49 p.m. EDT | Even before Tuesday’s primary results are in, a group of conservative leaders is calling a meeting to discuss options for blocking Donald Trump’s path to the Republican nomination — including the possibility of rallying around a third-party candidate.

A person familiar with the planning for Thursday’s meeting says the discussion will focus first on trying to get conservatives to unite around one candidate to compete against Trump. High-dollar donors would be mobilized to pressure other candidates to go along with that plan.

The discussion will also focus on the logistics of getting a third-party candidate on state ballots, an option seen by organizers as a “lifeboat” for conservatives. Participants will discuss ballot access issues, including using an existing third party as a vehicle for a candidate or securing signatures for an independent bid.

The meeting was first reported by Politico. The person familiar with the planning confirmed the meeting on the condition of anonymity because they were not authorized to discuss the gathering by name. — White House correspondent Julie Pace, Associated Press