NEW YORK — Front-runners Donald Trump and Hillary Clinton swept to resounding victories in Tuesday’s New York primary, with Trump bouncing back convincingly from a difficult stretch in his Republican campaign and Clinton pushing tantalizingly close to locking up the Democratic nomination.

“The race for the nomination is in the home stretch, and victory is in sight,” Clinton declared to cheering supporters.

Trump captured more than 50 percent of the vote in New York and was headed toward a big delegate haul in his home state, a commanding showing that keeps him on a path to the GOP nomination if he continues to win. He claimed at least 89 of the 95 delegates at stake Tuesday, with Ohio Gov. John Kasich winning at least three and Texas Sen. Ted Cruz in danger of getting shut out. 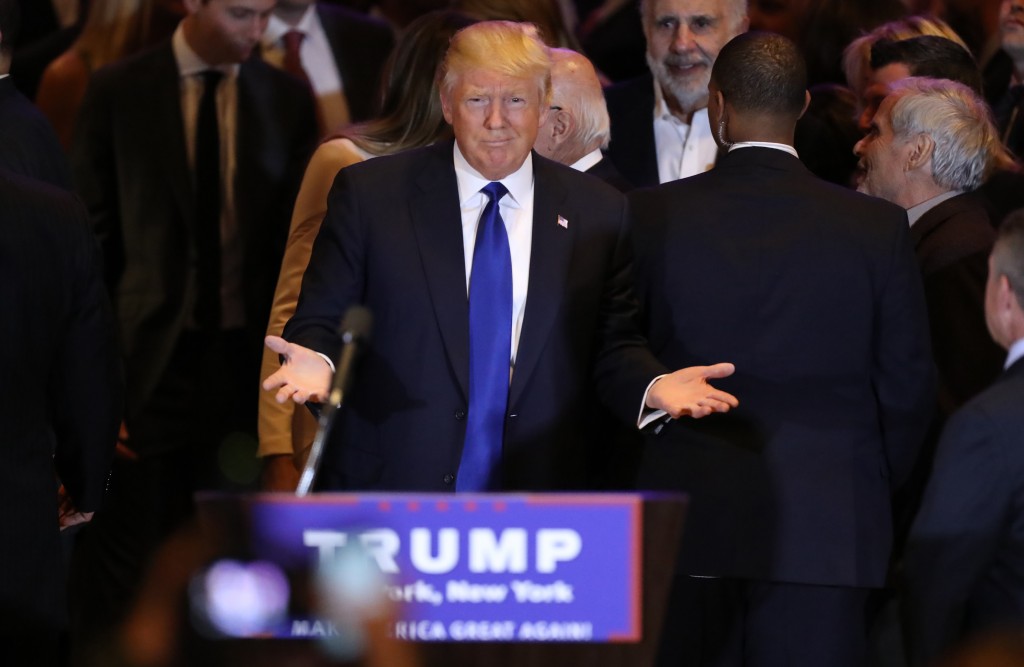 Trump’s victory in the New York presidential primary was a boost for his campaign, though what it means for his path to the GOP nomination is still to be determined by the number of delegates he secures. Photo by Carlo Allegri/ Reuters

A confident Trump insisted it was impossible for his rivals to catch him. Indeed, Cruz’s poor showing in New York left him without any mathematical chance of clinching the nomination before the Republican convention in July, though Trump could still end up short of the needed 1,237 needed to seal victory before the gathering.

“We don’t have much of a race anymore,” Trump said during a victory rally in the lobby of the Manhattan tower bearing his name. He peppered his brash remarks with more references to the economy and other policy proposals than normal, reflecting the influence of a new team of advisers seeking to professionalize his campaign.

Clinton’s triumph padded her delegate lead over rival Bernie Sanders and put her 80 percent of the way to clinching the Democratic nomination that eluded her eight years ago. In a shift toward the general election, she made a direct appeal to Sanders’ loyal supporters, telling them she believes “there is more that unites us than divides us.”

READ MORE: What to watch for in New York’s primary

Exit polls suggested Democrats were ready to rally around whoever the party nominates. Nearly 7 in 10 Sanders supporters in New York said that they would definitely or probably vote for Clinton if she is the party’s pick.

Sanders energized young people and liberals in New York, as he has across the country, but it wasn’t enough to pull off the upset victory he desperately needed to change the trajectory of the Democratic race. Still, the Vermont senator vowed to keep competing.

“We’ve got a shot to victory,” Sanders said in an interview with The Associated Press. However, his senior adviser Tad Devine said later that the campaign planned to “sit back and assess where we are” after a string of contests next week. 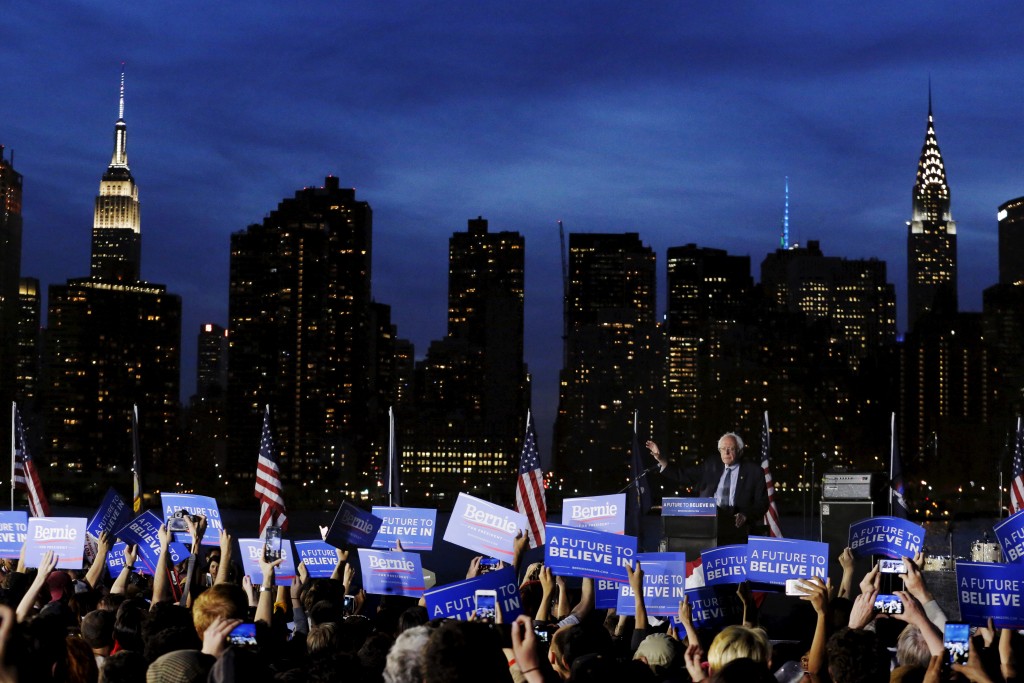 Bernie Sanders speaks at a campaign rally at Hunter’s Point in the Queens borough of New York on April 18. Photo by Lucas Jackson/ Reuters

Of the 247 Democratic delegates at stake in New York, Clinton picked up at least 135 while Sanders gained at least 104.

The fight for New York’s delegate haul consumed the presidential contenders for two weeks, an eternity in the fast-moving White House race. Candidates blanketed every corner of New York, bidding for votes from Manhattan and the surrounding boroughs to the working class cities and rural enclaves that dot the rest of the state.

The nominating contests will stay centered in the Northeast in the coming days, with Connecticut, Delaware, Maryland and Pennsylvania all holding contests next week. Sanders spent Tuesday in Pennsylvania, as did Republican Sen. Ted Cruz, Trump’s closest rival.

Cruz panned Trump’s win in New York as little more than “a politician winning his home state,” then implored Republicans to unite around his candidacy.

“We must unite the Republican Party because doing so is the first step in uniting all Americans,” Cruz said in formal remarks.

Trump needed a strong showing in New York to keep alive his chances of sewing up the GOP nomination before the party’s July convention — and to quiet critics who say the long primary season has exposed big deficiencies in his campaign effort. 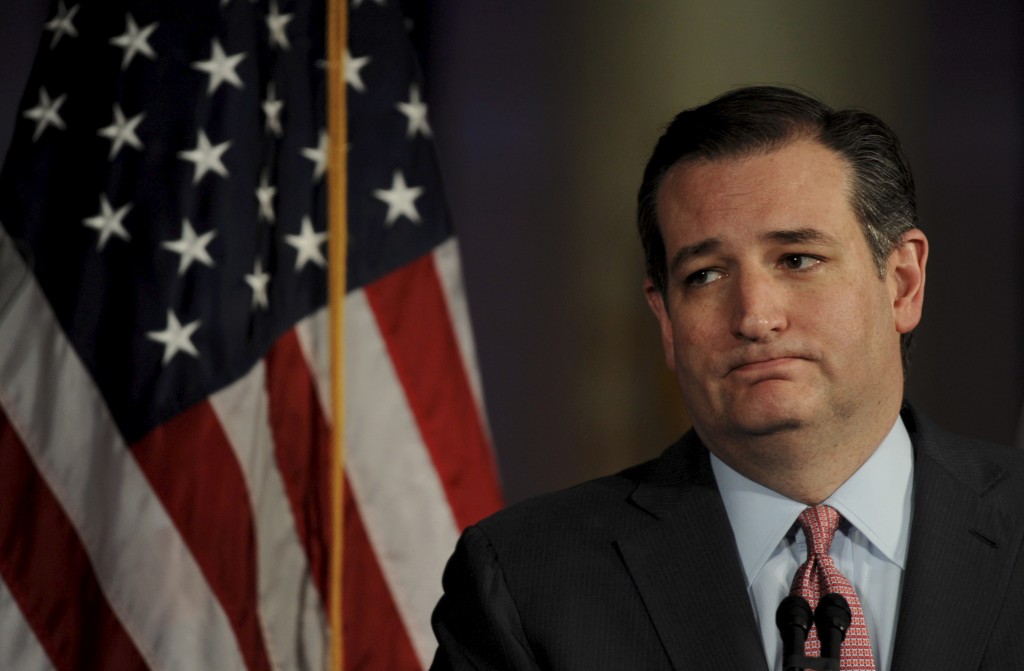 Having spent months relying on a slim staff, Trump has started hiring more seasoned campaign veterans. He’s acknowledged that bringing new people into his orbit may cause some strife, but says the moves were necessary at this stage of the race.

Cruz is trying to stay close enough in the delegate count to push the GOP race to a contested convention. His campaign feels confident that it’s mastered the complicated process of lining up individual delegates who could shift their support to the Texas senator after a first round of convention balloting.

Kasich, the only other Republican left in the race, bested Cruz on Tuesday and is refusing to end his campaign despite winning only his home state.

Trump’s political strength, though he boasts of drawing new members to the party, has left some Republicans concerned that his nomination could splinter the GOP. Among Republican voters in New York, nearly 6 in 10 said the nominating contest is dividing the party, according to exit polls. 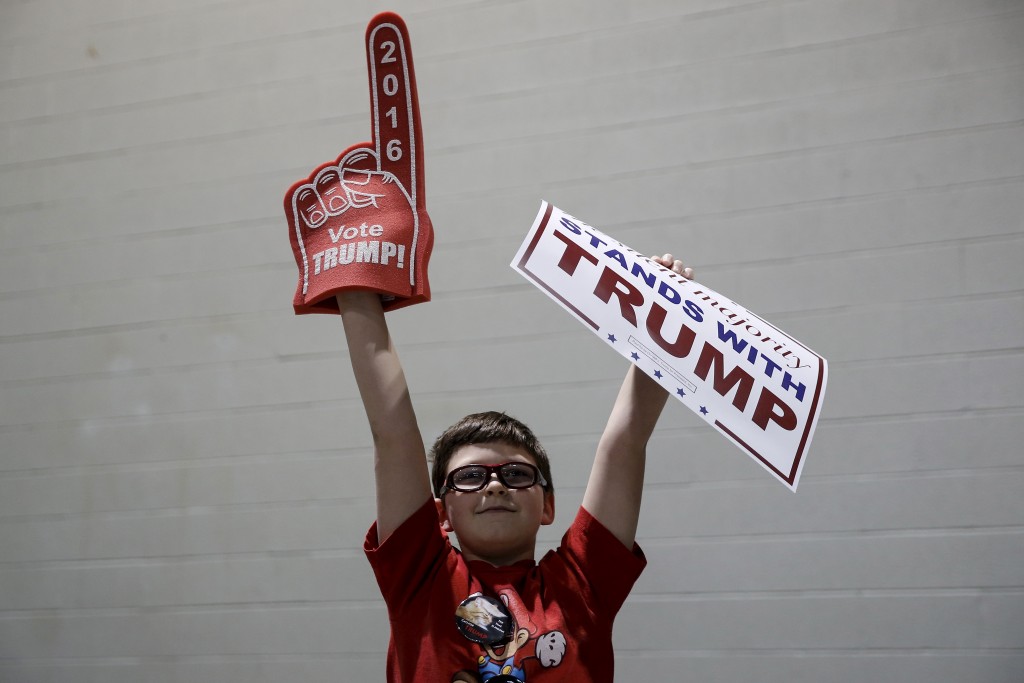 Still, about 7 in 10 New York Republicans said the candidate with the most votes in primary contests should be the Republican presidential nominee

The surveys were conducted by Edison Research for The Associated Press and television networks.

Trump now leads the GOP race with 845 delegates, ahead of Cruz with 559 and Kasich with 147. Securing the GOP nomination requires 1,237.

Among Democrats, Clinton now has 1,893 delegates to Sanders’ 1,180. Those totals include both pledged delegates from primaries and caucuses and superdelegates, the party insiders who can back the candidate of their choice regardless of how their state votes. It takes 2,383 to win the Democratic nomination.

Left: Supporters celebrate as Hillary Clinton is declared by television networks as the winner in the New York presidential primary at a rally in the Manhattan borough of New York City on April 19. Photo by Mike Segar/ Reuters