Michael Cohen, President Donald Trump’s former lawyer, will be sentenced Wednesday after he pleaded guilty to tax evasion and campaign contribution violations, as well as lying to Congress about negotiations to build a Trump Tower in Moscow in the runup to the 2016 presidential election.

The sentencing will culminate a swift fall from grace for Cohen, who spent more than a decade working for Trump and for his organization before getting caught up in special counsel Robert Mueller’s investigation into Russia meddling in the 2016 presidential election. Cohen is now cooperating with the special counsel’s probe, and has also cooperated with federal prosecutors in New York, where he is being sentenced Wednesday by a federal judge.

Ahead of the sentencing, here’s a timeline to help keep track of the federal probe in New York and Cohen’s involvement in the Russia investigation. Some of these entries also live in PBS NewsHour Correspondent Lisa Desjardins’ interactive, frequently updated giant Russia timeline. Check out the full timeline here.

2006: Cohen joins the the Trump Organization as an attorney and executive.

May 27, 2013: Cohen tells Page Six that Trump is considering a presidential run, and spent $1 million on research.

The sentencing will culminate a swift fall from grace for Cohen, who spent more than a decade working for Trump and for his organization.

October 2015: Trump’s company signs a letter of intent to build a Trump Tower project in Moscow. Michael Cohen and the businessman Felix Sater worked on the deal. 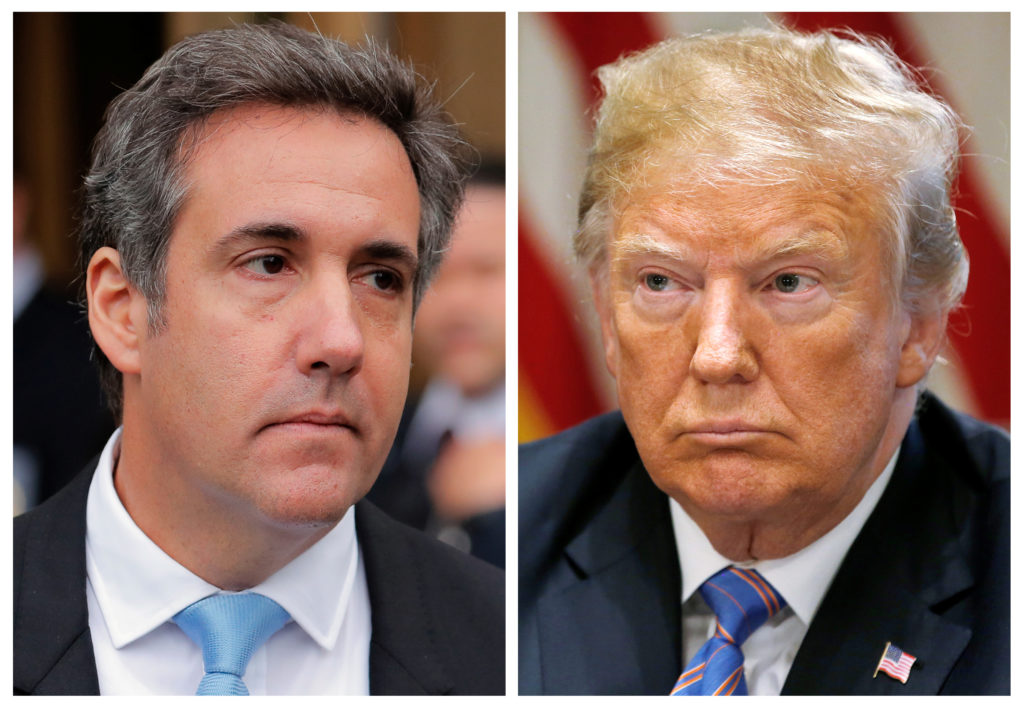 Michael Cohen began working for the Trump Organization as an attorney and executive in 2006. Photos by Lucas Jackson, Leah Millis/Reuters

November 2015: Cohen first spoke to a Russian national who claimed to be a “trusted person” in the Russia government and offered “political synergy” with Trump’s campaign, according to a Mueller court document filed in December 2018.

Jan. 20, 2016: An assistant to Russian spokesman Peskov emails Cohen and asks to talk.

Jan. 21, 2016: “Individual 2,” identified by the Washington Post as Sater, emails Cohen about Putin, writing that “they called today,” according to court documents.

May 4, 2016: Cohen and “Individual 2,” or Sater, write about trips to Moscow for him and Trump, according to court documents.

May 5, 2016: “Individual 2,” reported to be Sater, tells Cohen that Peskov wants him to come to Russia in June, 2016, according to court documents.

June 2016: As late as this month, Cohen was still working on a possible Trump Tower deal in Moscow, he later told federal investigators.

June 14, 2016: On or near this date, Cohen tells Sater he will not be going to Russia, according to court documents.

Late August or early September 2016: There is evidence Cohen went to Prague via Germany during this time. Former British intelligence source Christopher Steele’s dossier alleges the purpose of the trip was to secretly meet with Russians. Cohen insisted he was never in Prague. 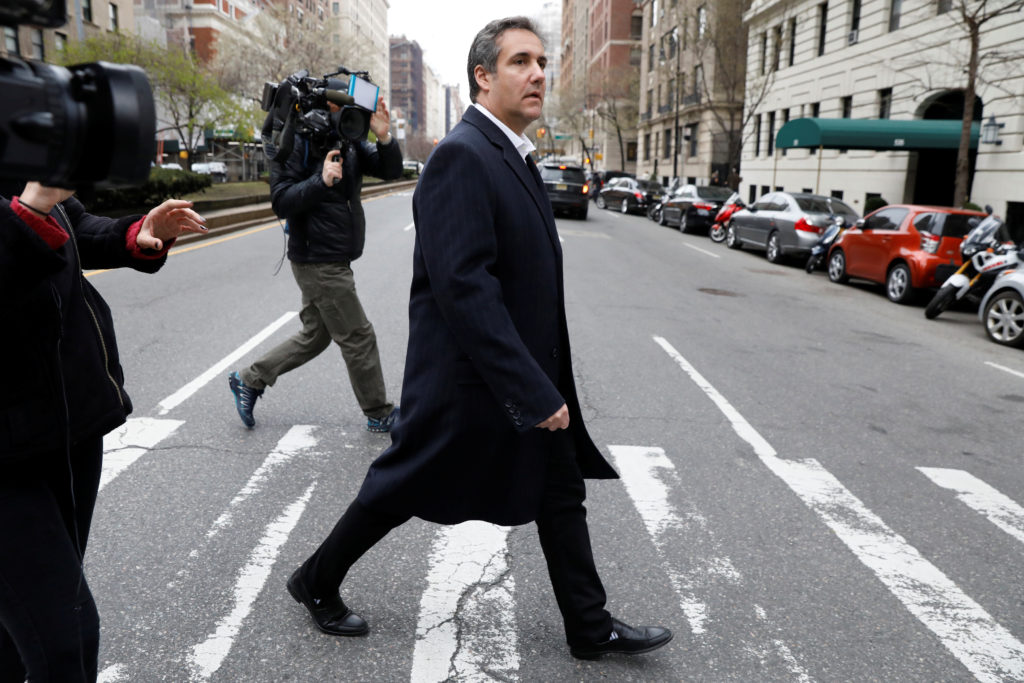 October 2016: Stephanie Clifford, the adult film star known as Stormy Daniels, signs a document with Cohen, agreeing to get paid in exchange for not go public about her allegations of a sexual encounter with Trump in the mid-2000s. A shell company created by Cohen wires Clifford a $130,000 payment.

Oct. 19, 2016: Steele writes in his dossier that a Kremlin insider told him about “the importance” of Trump lawyer Cohen in the “ongoing secret liaison relationship” with the Kremlin, and that Cohen’s role had grown following the departure of campaign chair Paul Manafort.

Feb. 6, 2017: According to the New York Times, Cohen delivers this pro-Russia peace plan to then-National Security Adviser Michael Flynn at the White House. The White House later denied receiving the plan, and Cohen said he did not discuss it nor hand it over to anyone at the White House. (Shortly after, Flynn, who is now cooperating with Mueller’s probe, resigned after misleading Vice President Mike Pence about his contacts with Russia.) 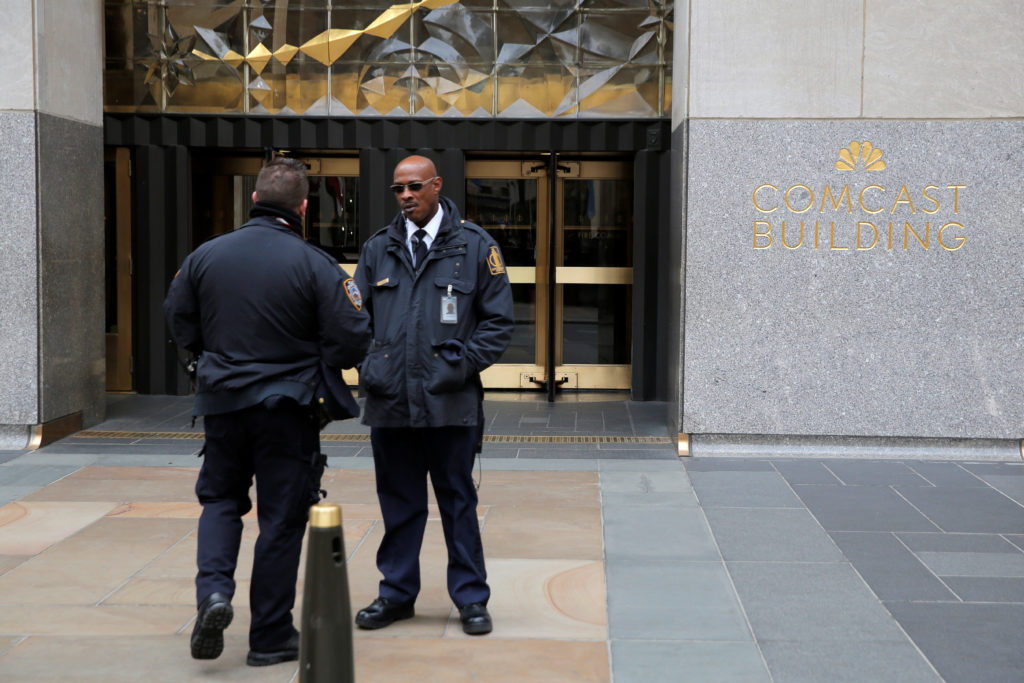 Police and security stand outside 30 Rockefeller Plaza, where Cohen’s offices were raided by the F.B.I. on April 9, 2018. File photo by REUTERS/Andrew Kelly

Aug. 14, 2017: Cohen sends a letter to congressional investigators disputing the Steele dossier that was made public in January.

Oct. 25, 2017: Cohen testifies before the Senate Intelligence Committee. He later admits to lying in his prepared statement and remarks.

April 25, 2018: Cohen asserts his Fifth Amendment right not to testify in the case involving Stephanie Clifford.

June 15, 2018: Trump criticizes the FBI raid on Cohen’s office, and says he “feels badly” for him and others who are under prosecution.

Aug. 7, 2018: Cohen meets with Mueller’s team for the first time and lies to them about the Trump Organization project in Moscow he was helping negotiate in 2016.

Aug. 21, 2018: Cohen pleads guilty to eight counts of tax and finance violations in federal court. He says that Trump directed him to break campaign finance laws when he orchestrated payments to Clifford and another woman in exchange for them staying silent about alleged affairs with Trump.

Aug. 22, 2018: Trump writes on Twitter that he feels bad for Manafort, but not for Cohen, because he “broke” and lied to prosecutors in order to get a deal.

Sept. 12, 2018: Cohen meets with Mueller’s team a second time and admits he misled them about the Moscow project.

Nov. 29, 2018: Cohen pleads guilty in federal court to lying to Congress about his knowledge of Trump’s Moscow project.