No matter how Colorado votes, GMO labeling debate far from over

Editor’s Note: With a month left before the Nov. 4 general election, voters in Colorado and Oregon are considering a measure requiring the labeling of foods containing genetically modified ingredients (GMOs). Proponents of these laws say consumers have a right to know what’s in their food. Opponents believe labeling laws will cause hardship for those who grow and sell GMO crops and derived products. It’s a ballot issue inspiring strong emotion – and large campaign donations – from both camps. For KUNC and Harvest Public Media, Luke Runyon explores the science, politics, and personal concerns motivating this debate.

At a west Denver grocery store, Ben Hamilton says he puts a lot of weight on food package labels.

“I am a label reader,” says Hamilton, a human resources consultant. “I think a lot of people read labels and are curious.”

That means gravitating toward organic options and scanning nutritional facts. But Hamilton says he wants more information, specifically whether or not the food he’s about to buy includes a genetically modified ingredient.

Before the current run-up to November, Hamilton and 19 other voters in Colorado sat on a citizen review panel tasked with hearing from both sides. At the end of three days of debate, the group wrote up their conclusions and took a straw vote. The panel voted 11 to nine in favor of labels. Hamilton’s “yes” vote is right in line with consumer groups that say GMOs come with too many unanswered questions.

“I think this boils down to a consumer’s right to know,” Hamilton says. “So it’s not to debate whether GMOs are safe or they’re good for you or bad for you. But it is about a right to know what’s in our food supply.” 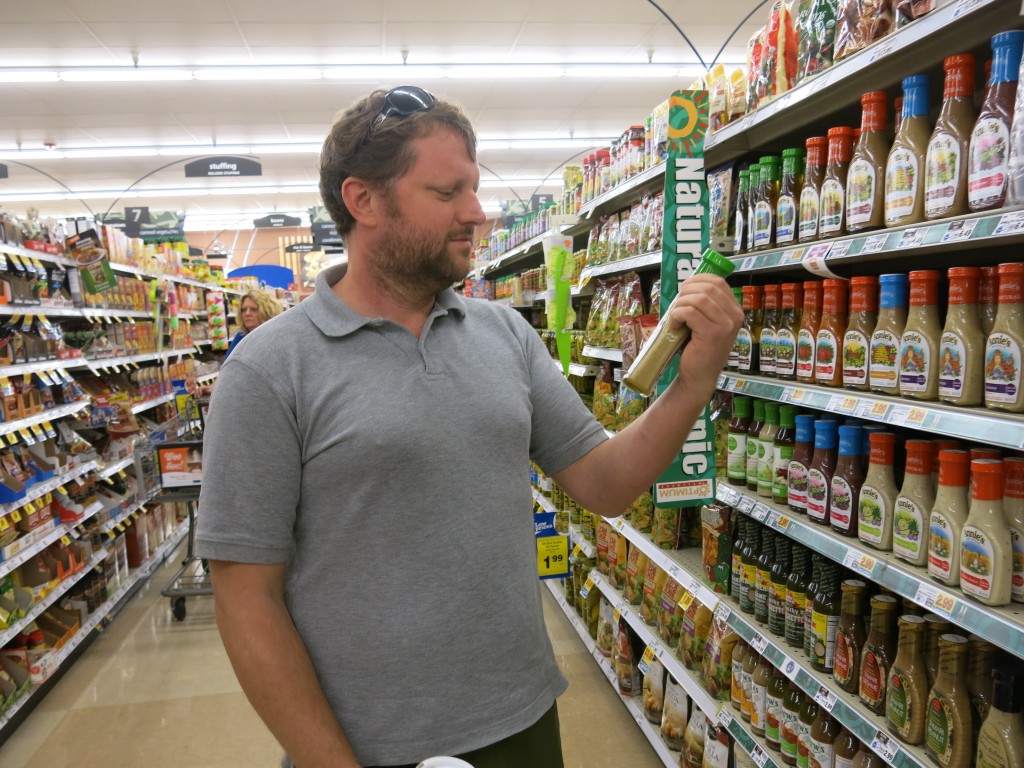 Denver resident Ben Hamilton sat on a citizen panel tasked with writing a report on proposition 105, which would require the labeling of foods that contain genetically modified ingredients. Photo by Luke Runyon/KUNC and Harvest Public Media.

Efforts to pass labeling laws through ballot initiatives in other states have been unsuccessful. Similar measures failed in California and Washington state. Vermont is being sued for the labeling law it enacted earlier in 2014.

Oregon voters will also be voting on GMO labeling in this election. Like Colorado, there was a similar citizen review panel. Ernest Estes, a Portland lawyer who sat on that panel has his doubts.

“I’m not convinced we need it at this point,” Estes says. “And I’m not sure it does much for Oregonians.”

Estes wasn’t alone in that sentiment. The citizen panel in Oregon also voted 11 to nine, but in the opposite direction as the Colorado panel. They turned down the labeling proposal.

“If there is little to no risk to the public,” Estes says. “I’m not sure the government should be in the role of requiring things like this.”

Current science hasn’t found adverse health effects from humans eating genetically modified foods. That’s supported by the American Association for the Advancement of Science and the World Health Organization. Many scientists, including the board of directors of the AAAS, say labeling initiatives are being driven by misconceptions about genetically modified crops being unnatural or untested.

As it’s written, the Colorado labeling proposal includes a bevy of exemptions. The meat from a cow that’s fed GMO corn and hay won’t be labeled. Neither will dairy products, chewing gum, alcohol and pet food. Colorado Right To Know leader Larry Cooper, who spearheaded the signature gathering campaign to get the issue on the ballot, says the proposal had to be narrowly written.

“We had to be very careful what subjects we put in the ballot. Yes, we’ve eliminated some specific areas, but certainly they can be added later,” Cooper says.

Even with narrower language, lawsuits are likely inevitable if it passes, like in Vermont. Legal experts say to expect even more legal wrangling over labeling as more states look to add to the national patchwork of GMO laws.

The proposals in Oregon and Colorado bring up thorny constitutional issues about free speech and commerce, Marceau says. If a GMO labeling law makes it all the way to the Supreme Court, and opponents are unable to prove genetically modified food is harmful, Marceau says the law would be in jeopardy for violations of the First Amendment and Commerce Clause.

“Why do we need this information? If it’s idle curiosity that we’re all just really curious about what’s in our food, that might not be good enough. If it is GMOs are harmful, then that’s a different matter,” Marceau says.

GMO labeling would undoubtedly have economic implications. Opponents of the measure say implementation of the new labels could raise the average family’s food bill by several hundred dollars per year. Labeling proponents say those figures are blown out of proportion.

Farmer Paul Schlagel says he’s sympathetic to curious consumers who want to know how their food is grown, but GMO labels are too far down that rabbit hole. He grows genetically engineered sugar beets outside Longmont, Colorado. The sweet tasting beets are turned into granulated sugar at a nearby plant. 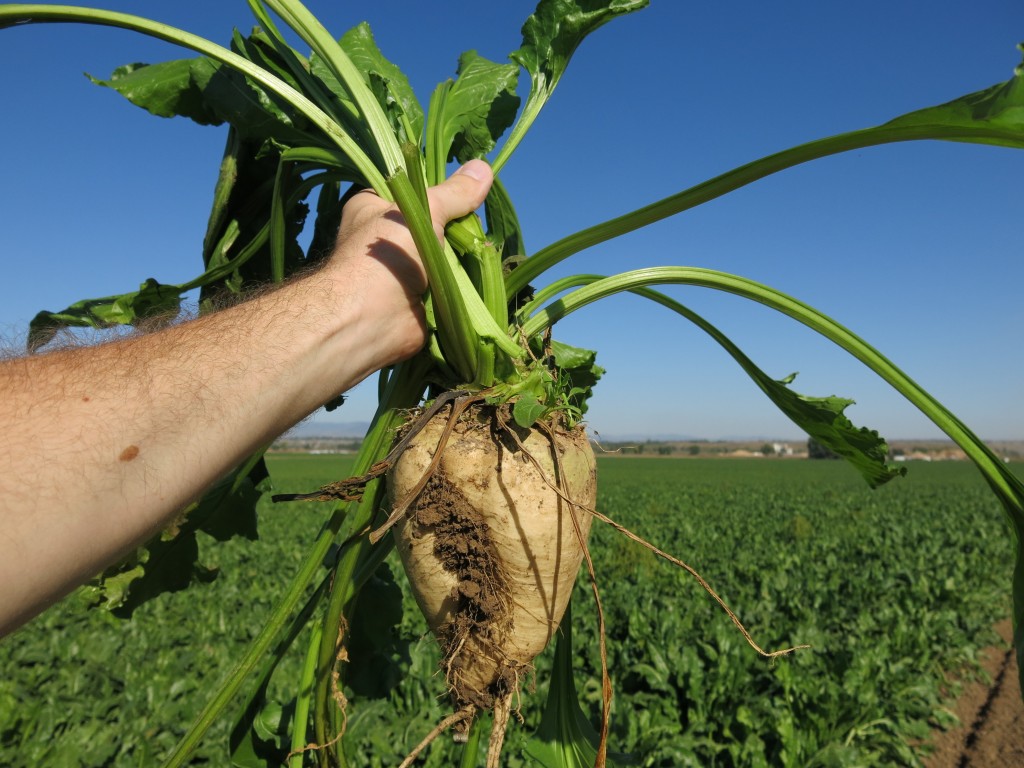 Nearly 50 percent of the nation’s sugar comes from sugar beets, which resemble turnips with their white, fleshy roots. This sugar beet has been genetically modified to withstand the herbicide glyphosate. Photo by Luke Runyon / KUNC and Harvest Public Media.

“When you process the sugar beets, there’s no GE material in the sugar. The sugar is identical to conventionally grown sugar, sugar cane, even organic sugar,” Schlagel says.

Schlagel’s beets are Roundup Ready, meaning the plant’s DNA has been altered to withstand applications of the herbicide glyphosate, though the particular gene that allows for the resistance isn’t present after the fleshy beet root is processed into sugar. If Proposition 105 passes though, the sugar that’s grown on his farm will bear a label saying it was genetically engineered.

“It’s just misinformation. It’s misleading. Prop 105 is a mistake and I hope the consumers can figure that out,” Schlagel says.

Both Colorado and Oregon consumers will have a chance to make their voices heard at the ballot box in November. And with more states taking up proposals, the national debate about GMO labeling is far from over.