Kentucky’s major party candidates for U.S. Senate will meet for a moderated conversation on Kentucky Educational Television’s signature politics program Monday, Oct. 13, at 8 p.m. EDT, in what is expected to be their only face-to-face event before the Nov. 4 general election.

Sen. Mitch McConnell (R) and Kentucky Secretary of State Alison Lundergan Grimes (D), who are embroiled in one of the most contentious national races in the country, will appear live on “Kentucky Tonight” with host Bill Goodman. Libertarian candidate David Patterson will not be present, following a short but heated legal challenge against KET.

The race is one of the most closely-followed and hotly-contested of the season, where this seat is pivotal not only to determining control of the Senate, but also its leadership. If Grimes unseats five-term incumbent McConnell, she could both block Republicans from gaining the Senate and also knock McConnell, the current Minority Leader, from GOP party leadership. 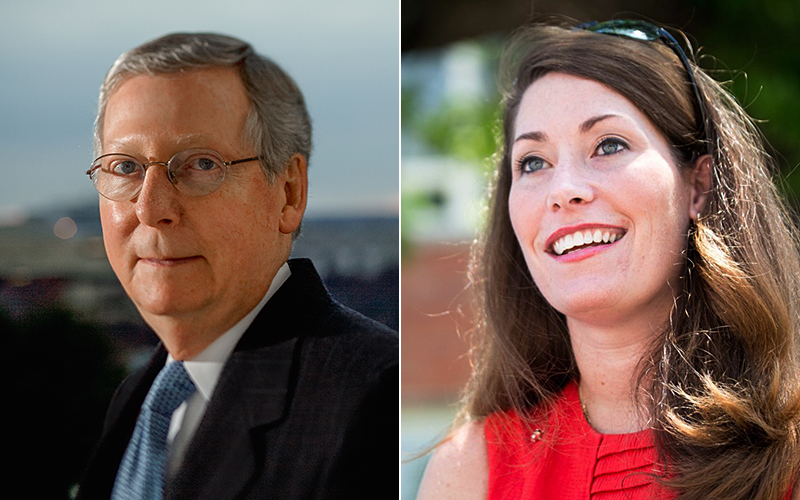 For this reasons, Democrats have been pouring money into offense. PBS NewsHour’s Morning Line team reported in July that Grimes had broken state fundraising records that quarter, and both sides still have substantial war chests going into the final weeks of the campaign.

At tonight’s debate, the candidates will need to convince voters that they can bring jobs back to a state heavily reliant on a declining coal industry. Both Grimes and McConnell have criticized federal energy policy, including regulations on coal-fired power plants, for contributing to Kentucky’s struggling economy and high unemployment rates, and both have decried what they call President Obama’s “war on coal.”

Grimes in particular has had to distance herself from the unpopular president. In September, she released an ad showing her looking into the camera and saying: “I am not Barack Obama.” And at an interview with the Louisville Courier-Journal, she declined to answer a question about whether she had voted for him in 2008 or 2012.

Healthcare and immigration, two signature Obama administration issues, are also likely to be front and center at tonight’s debate.

Tonight’s debate will not be open to an audience, but viewers with questions for the candidates may send them via e-mail to kytonight@ket.org or use the message form at KET.org/kytonight. Viewers may also submit questions on Twitter via @BillKET or on KET’s Facebook page. The phone number for viewer questions during the program is 1-800-494-7605. All messages should include the first and last name and the hometown or home county of the submitter.