More than 80 Maine writers, including Stephen King, to Sen. Collins: Vote ‘no’ on Kavanaugh

Dozens of Maine writers joined a letter addressed to Sen. Susan Collins, a key GOP swing vote in the battle over Brett Kavanaugh’s Supreme Court nomination, urging the lawmaker to vote “no.”

The letter, penned by authors Kate Christensen and Richard Russo, criticizes Kavanaugh’s temperament during last week’s hearing, where “he showed himself to be untruthful, temperamentally unsuited and driven by partisanship.”

The letter continued: “His lies and self-serving exaggerations (words matter to us writers), as well as his snarling hostility toward women with the temerity to question him, don’t suggest a person who is deeply committed to the principles of fairness, or, for that matter, objective truth. Indeed, a magistrate on a county bench ought to be able to clear a bar as low as this one.”

Kavanaugh defended his temperament during the hearing on a sexual assault allegation from Christine Blasey Ford in a Thursday op-ed in The Wall Street Journal.

“I was very emotional last Thursday, more so than I have ever been. I might have been too emotional at times,” Kavanaugh wrote. “I know that my tone was sharp, and I said a few things I should not have said.”

But Kavanaugh, who has repeatedly denied Ford’s claim, also wrote that his “statement and answers also reflected my deep distress at the unfairness of how this allegation has been handled.”

The names of more than 70 Maine writers, including Stephen King and Elizabeth Strout, among others, are listed on the letter.

Collins is expected to announce later Friday her decision on the final floor vote for Kavanaugh’s confirmation. After a morning of divided speeches from a handful of senators, the Senate voted 51-49 to end debate on the floor and to advance Kavanaugh’s nomination to a final vote expected later this weekend.

In Friday’s procedural vote, Sen. Lisa Murkowski, R-Alaska, was the only Republican who voted “no,” while Democratic Sen. Joe Manchin, D-W.V., was the only Democrat to vote “yes.” Both senators are also seen as crucial votes. Collins didn’t vote against Kavanaugh in the procedural vote Friday; she can still vote differently for the final vote.

“To vote to confirm Kavanaugh, you would have to be confident that he wouldn’t abuse his power. Are you?” the Maine writers asked. 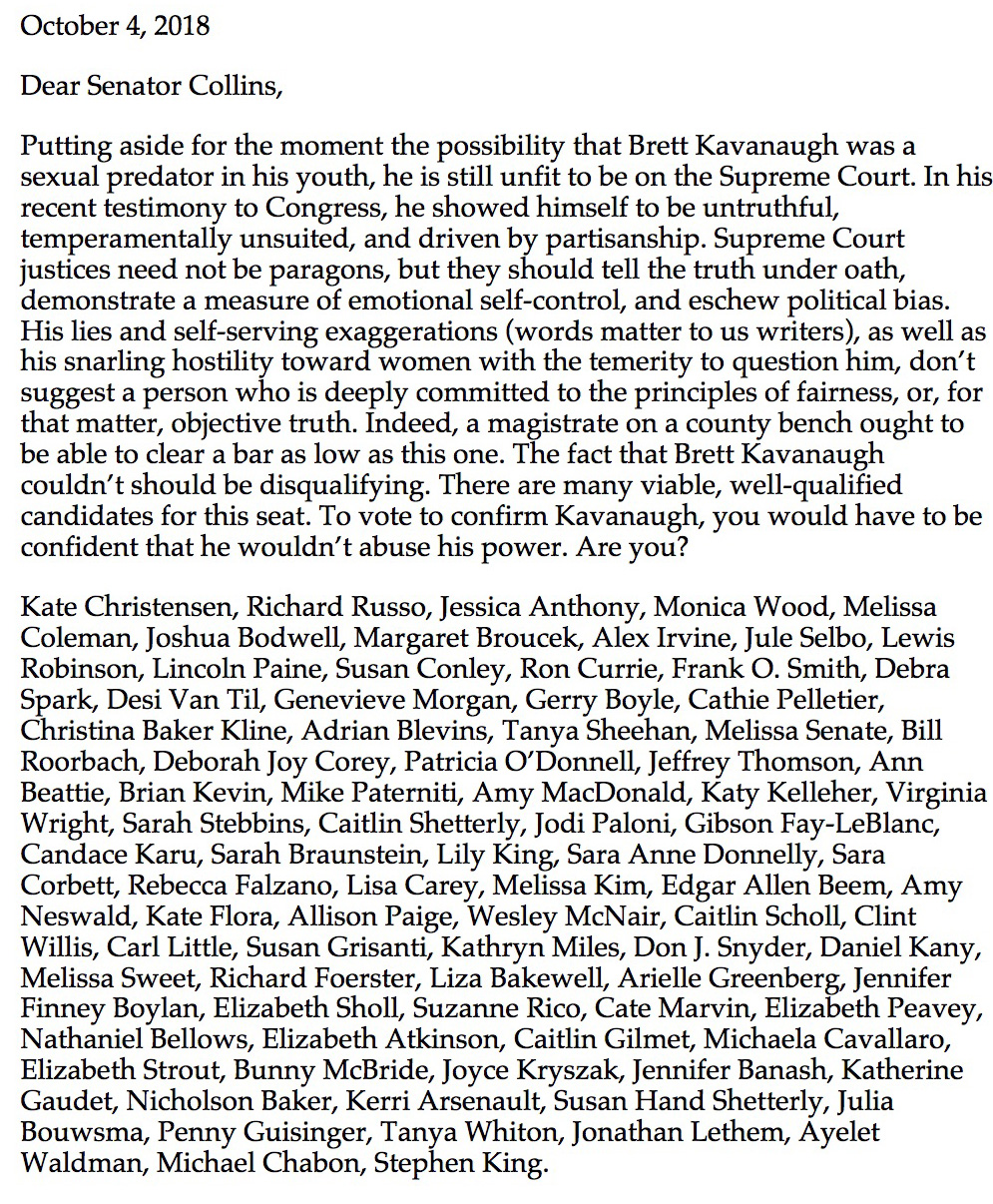