Here’s who Americans blame for U.S. failures in Afghanistan

Nearly three-quarters of Americans agree that the United States’ involvement in Afghanistan was a failure, according to a new PBS NewsHour/NPR/Marist poll.

No matter their politics, generation, gender, race or income, most agreed it was time to end U.S. involvement in Afghanistan. While a majority disapproved of President Joe Biden’s handling of the withdrawal, there were deep divides on how it should have been done.

More than a third of Americans, including 54 percent of Democrats, said the U.S. should have withdrawn all its troops. Another third, including 46 percent of Republicans, preferred to bring back some U.S. troops, but leave a military presence in the region. Only one out of 10 Americans wanted troop levels to stay unchanged. Even fewer — one in 20 — wanted to send more U.S. troops to the country. 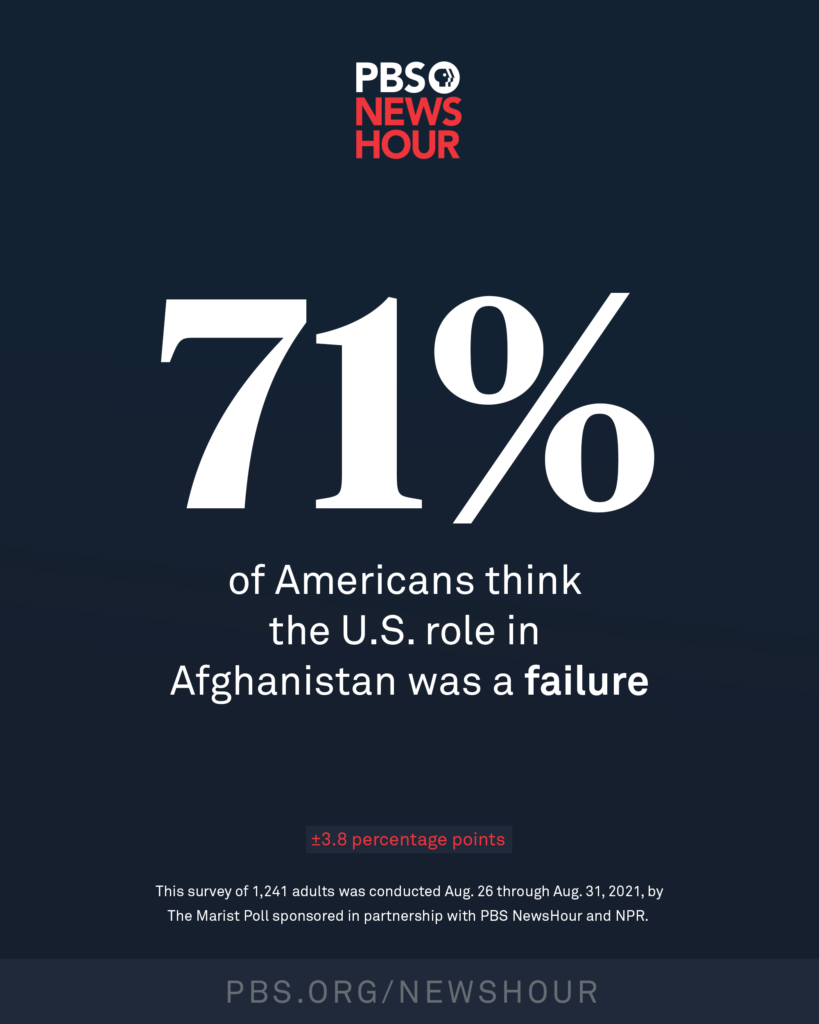 The chaotic evacuation of more than 120,000 Americans, U.S. allies and Afghans from Kabul seems to have cost Biden significant public approval as the nation nears the 20th anniversary of the Sept. 11 attacks.

Those coordinated acts of terrorism, which killed nearly 3,000 people on U.S. soil that day, drove then-President George W. Bush to initiate a global “war on terror” — a costly, decadeslong effort without a clear end. The war on terror has damaged U.S. credibility with allies and cost trillions of dollars, yet the U.S. mainland has not suffered another serious international terrorist attack since the war began. “We find ourselves with very little to show for our efforts,” said William Galston, senior fellow of governance studies at the Brookings Institution. 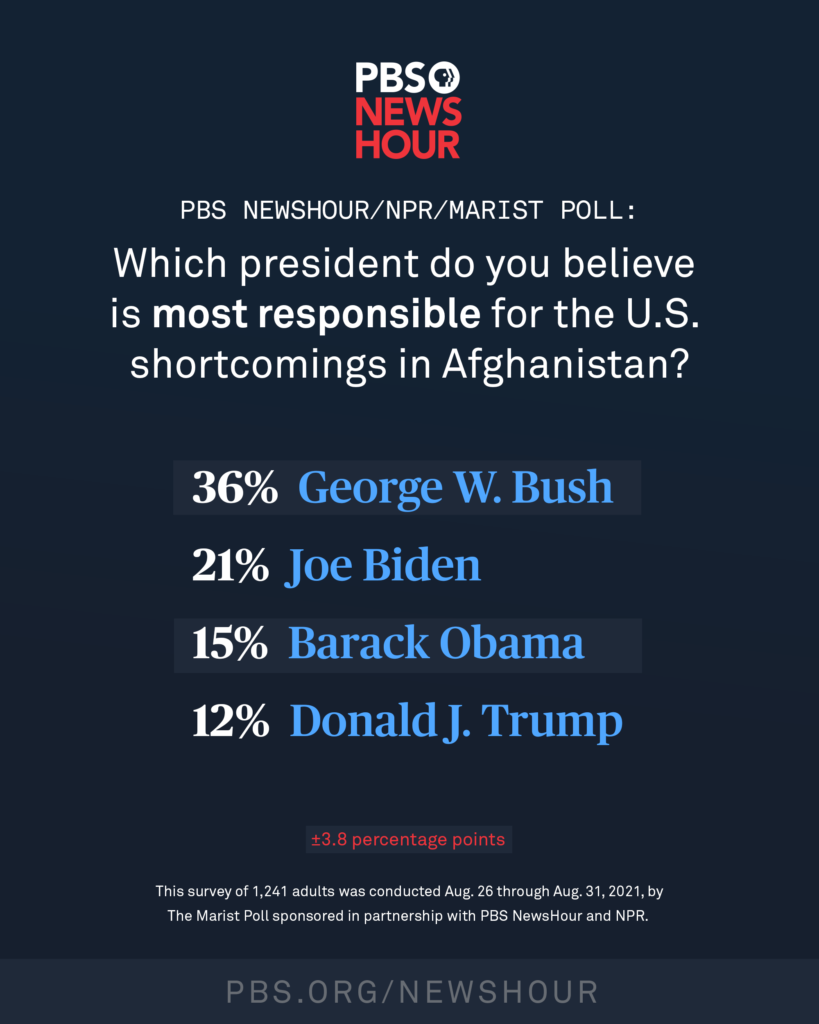 With the U.S. gone, Afghans fear the freedoms they gained will be lost. Their country is vastly different today than when the Taliban last held power, said Erol Yayboke, a senior fellow who directs the Project on Fragility and Mobility at the Center for Strategic and International Studies. More women and girls are used to having education and careers, and the infant mortality rate has dropped by about 50 percent. People have had regular access to electricity, the internet and ATMs.

Despite the collapse of the U.S.-supported former Afghan government, 29 percent of Americans say the U.S. has a duty to remain involved with the country. Republicans were close to evenly split over whether to quit the longest war in U.S. history. However, a majority of Americans — 61 percent, including most Democrats — say Afghanistan should determine its future on its own.

Afghans have been left feeling “betrayed by the United States” and questioning the morals and ethics of their allies, said Sher Jan Ahmadzai, who directs the Center for Afghanistan Studies at the University of Nebraska. The U.S. withdrawal was “irresponsible,” he said, adding that beyond the immediate aftermath — like reports of Taliban reprisals against those who cooperated with Americans — the lives of all 38 million people of Afghanistan are in jeopardy.

By leaving, “We did not fulfill our promises to ourselves and to the world where we have promoted these [human] rights,” Ahmadzai said. 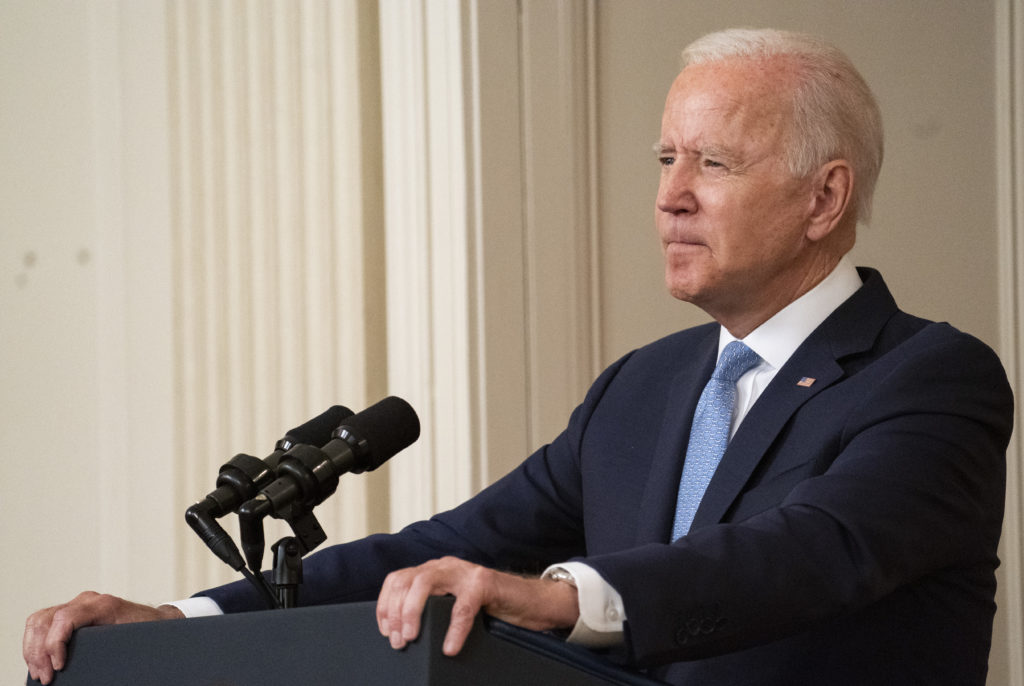 Like Afghans, many Americans also seem to dislike how the U.S. left that nation — nearly twice as many people disapprove of Biden’s handling of the end of the war compared to those who approve. On foreign policy, an area in which he had distinguished himself in Congress and as vice president, 56 percent of people now disapprove of Biden’s performance, a 12 point jump from July. Biden’s overall job approval as president declined to his worst standing since he took office nearly nine months ago, with about half of U.S. adults saying they disapproved of his performance. 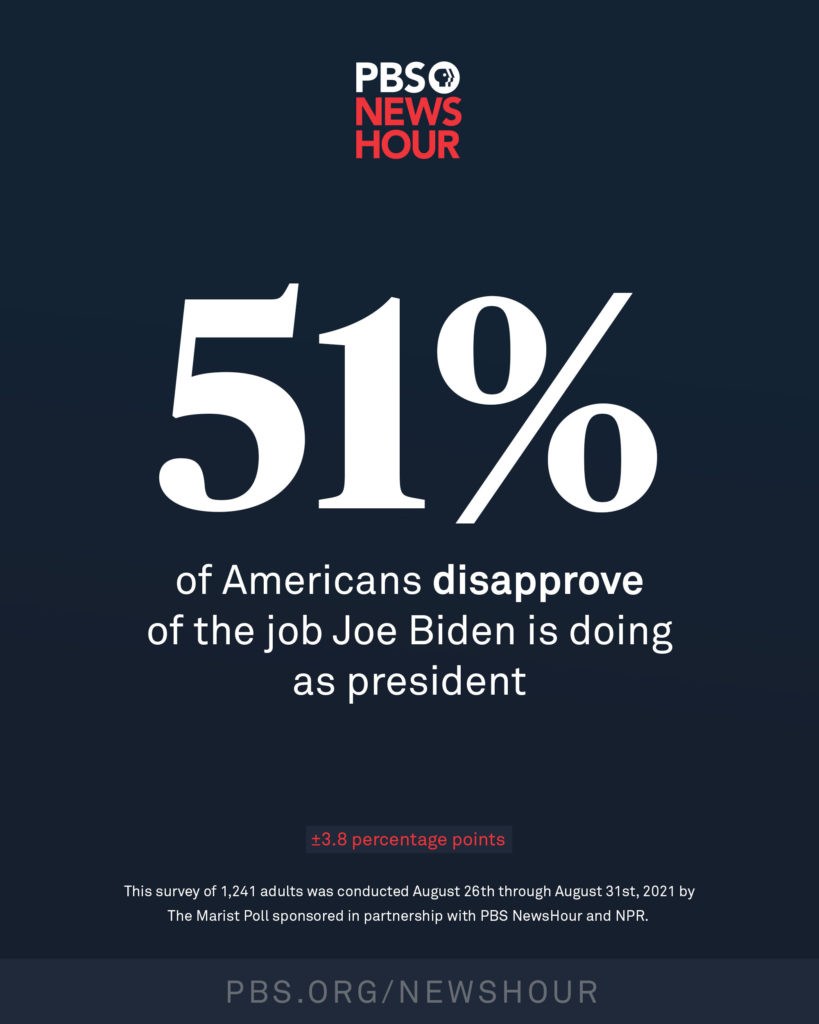 The Biden administration has been excoriated for not anticipating that the Taliban would seize the country in just 11 days, and for not being better prepared for the mass evacuations that followed. On Aug. 26, the first day this poll was conducted, Americans suffered one of their deadliest days in Afghanistan as an attack on crowds around Kabul’s airport killed 13 U.S. service members, along with at least 169 Afghans. But in an Aug. 31 speech from the White House, Biden defended his decision to leave the country how and when it did. The president said he did not want “to extend this forever war” and pointed to former President Donald Trump’s deal with the Taliban to withdraw U.S. troops by May 1. Biden also said he assumed the U.S.-trained Afghan National Security Forces “​​would be a strong adversary in their civil wars with the Taliban.”

“We succeeded in what we set out to do in Afghanistan over a decade ago. Then we stayed for another decade,” Biden said. “It was time to end this war.”

One out of five Americans say Biden is the president most responsible for how the U.S. role unraveled in Afghanistan, with more Republicans than Democrats naming him. More U.S. adults — 36 percent — pin the blame on Bush, who declared war in 2001. Only 12 percent of Americans placed the greatest responsibility on the shoulders of Trump, who had orchestrated the U.S. withdrawal when he struck a February 2020 deal with the Taliban. 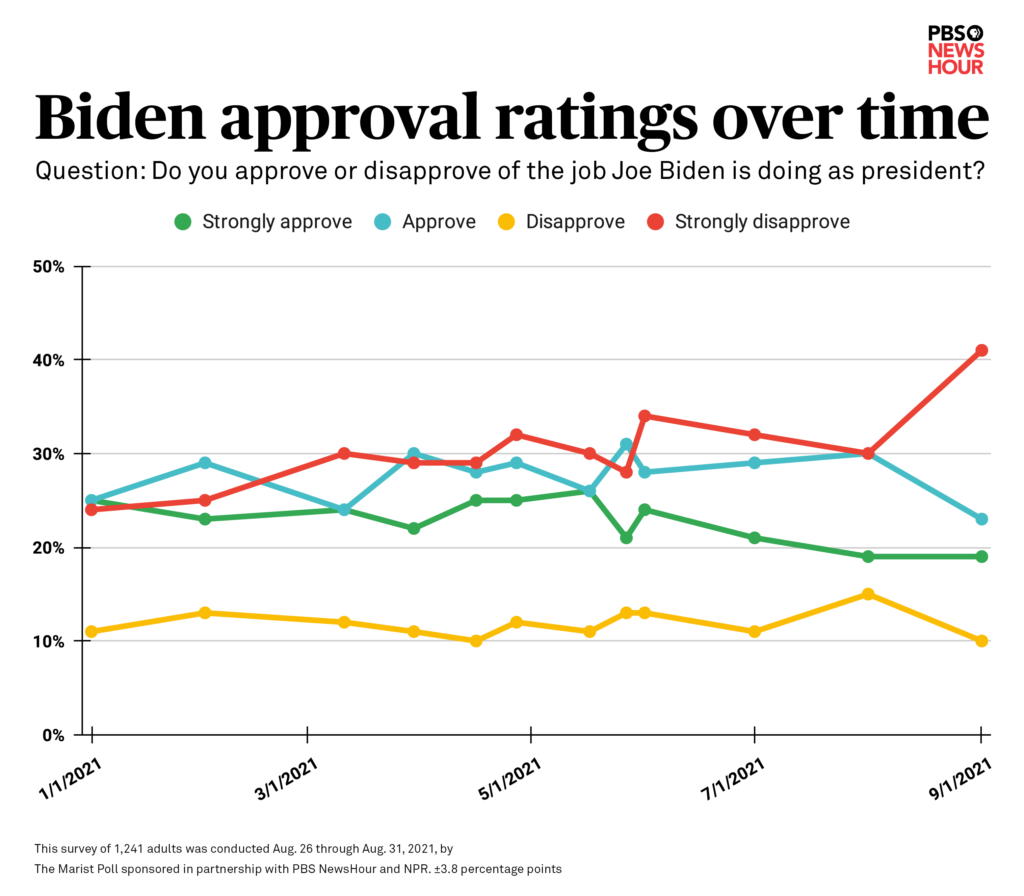 It is difficult — and perhaps too soon — to know how ending the war in Afghanistan has diminished Biden’s political capital, Galston said, “but it’s surely not helpful.” With key administration goals looming, declines in job approval and public support could undermine Democrats’ efforts to push through Biden’s domestic policy agenda and erode their power as a whole.

When it comes to presidential fallout from an unpopular policy carried out overseas, “Americans tend to have a pretty short memory,” Galston said. But he cautioned that sometimes ongoing media coverage of unresolved issues — such as daily coverage of the protracted Iranian hostage crisis when President Jimmy Carter was in office — could be “drummed into people’s consciousness as a continuing problem, not a problem from the past.” 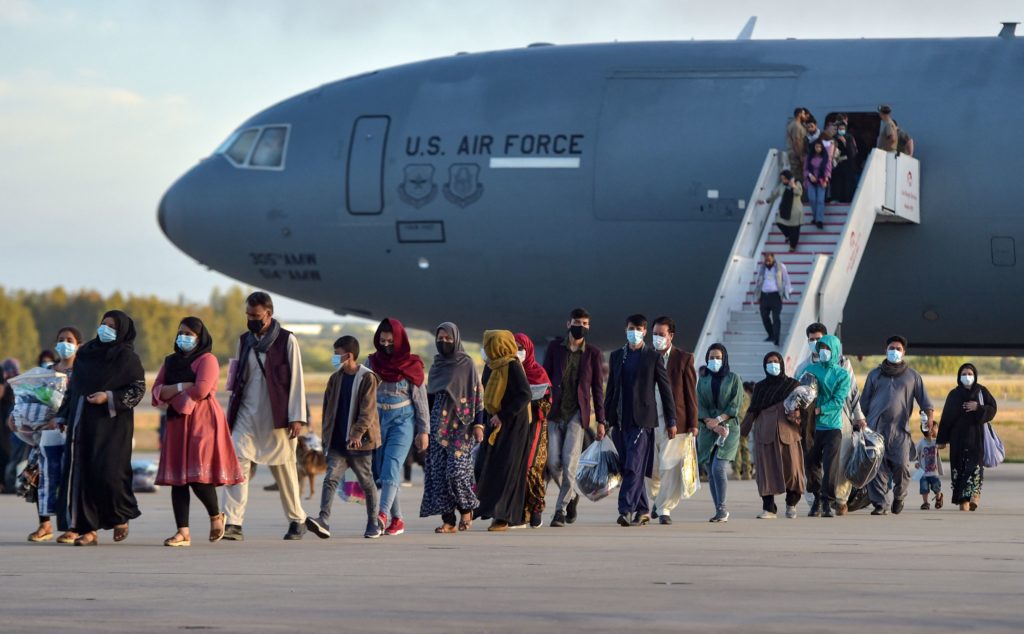 Refugees disembark from a US air force aircraft after an evacuation flight from Kabul at the Rota naval base in Rota, southern Spain, on August 31, 2021. – Spain has agreed to host up to 4,000 Afghans who will be airlifted by the United States to airbases in Rota and Moron de la Frontera in southern Spain. (Photo by CRISTINA QUICLER / AFP) (Photo by CRISTINA QUICLER/AFP via Getty Images)

About three-quarters of Americans say the U.S. should allow Afghan refugees to enter the country to escape the current situation. That includes most Democrats and independents, with Republicans divided on the question.

Support for Afghan refugees entering the U.S. is actually among the highest for any refugee group on record. Looking at historical Gallup survey data going back to 1939, when the U.S. public was asked if they welcomed German children into this country, only about one in four Americans said they did. Over the years, refugees from Syria, Vietnam and World War II Europe garnered much lower support than Afghans do today.

The U.S. was able to airlift 124,334 people in 778 planes during the August evacuation, Gen. Mark Milley said Wednesday. Thousands more are still hoping to find passage to the U.S., and an estimated 5.9 million people overall are displaced in Afghanistan, with more than a third of them deemed refugees or seeking asylum, according to Aug. 19 estimates from Brown University’s Costs of War Project.

Despite promises from the new leaders of Afghanistan that they won’t seek revenge, the Taliban is clamping down, Yayboke said, and Afghans, especially women and girls, are “justifiably scared.”

How Americans define terrorism and where it comes from has evolved over the last two decades. In May 2002, months after the Sept. 11 attacks, 56 percent of Americans said the nation’s greatest threat came from abroad through international terrorism, while 30 percent said they most feared domestic terrorism carried out by U.S. citizens.

In this most recent poll, 41 percent of Americans said they most fear acts of international terrorism, compared to 49 percent of U.S. adults who said domestic terrorism posed the most significant threat. That sentiment was especially strong among Black Americans, two-thirds of whom felt domestic terror was a greater threat, and who often have been targeted by such violence. 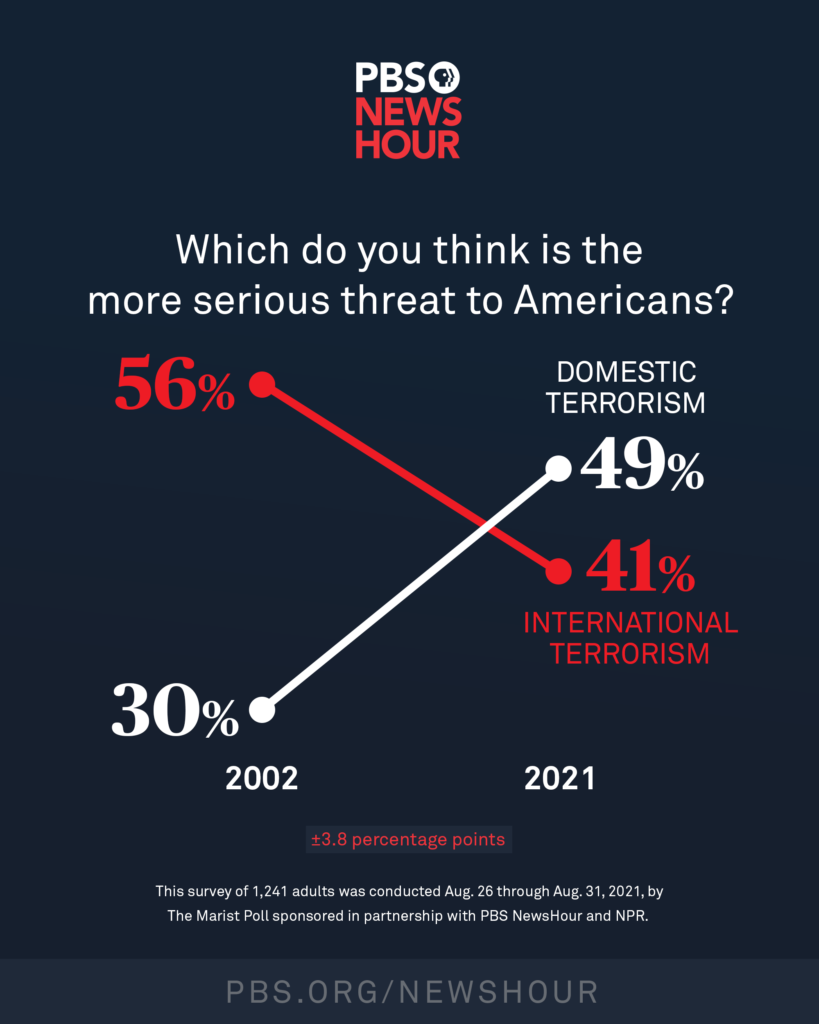 Since then, mass shootings have become commonplace and hate crimes have reached the highest level in more than a decade. The Jan. 6 attack from a crowd of Trump supporters at the U.S. Capitol was a deadly example of a growing number of “violent extremist narratives” driven by false claims of voter fraud and resistance to government COVID-19 safety measures. The Department of Homeland Security issued a bulletin last month warning that those who subscribe to these ideas, among other actors, were contributing to a “heightened threat environment” across the U.S. leading up to the anniversary of the 9/11 attacks.

These findings also highlight how perceptions of post-9/11 America differ depending on one’s age when the attacks occured. Gen Z and millennial Americans, many of whom were very young in 2001, are slightly more likely to say the U.S. is safer today than it was two decades ago. In contrast, older Americans, who knew life before the Sept. 11 attacks, are far more likely to say the country is less safe now.

Left: A member of Taliban forces stands guard as Afghan men take pictures of a vehicle from which rockets were fired, in Kabul, Afghanistan August 30, 2021. Photo by Reuters