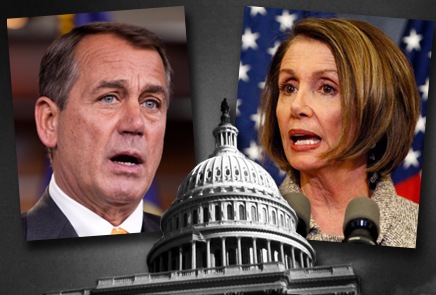 House Democrats chose Speaker Nancy Pelosi as the next minority leader, despite opposition from within the party following losses in the midterm elections.

Pelosi, along with the newly selected leaders of the House Democrats for the 112th Congress, addressed the media after they were chosen as leaders by their colleagues.

“I’m proud to be part of this leadership team. Our consensus is that we go out there listening to the American people. It’s about jobs, it’s about reducing the deficit and it’s about fighting for the middle class. I look forward to doing that with this great leadership team,” Pelosi said.

Pelosi also defended her record, and the decision by her party to keep her as their leader in the House despite historic losses in the midterm elections. She claimed that her poor popularity rating among independents was due to Republican ad campaigns targeting her.

“How would your ratings be if 75 million dollars were spent against you?” Pelosi said to NBC’s Luke Russert after he asked her if she was the right person to lead Democrats in the current political climate. Pelosi said she was targeted by Republicans because she led the Democrats to victory on health care and financial reform, and because she was able to attract resources to lead the party to victory.

Earlier today, a group of House Democrats seeking to delay leadership elections until later in the month lost a caucus vote by 129 to 68, clearing the way for the caucus to select the minority party leadership team for the 112th Congress

The party’s historic losses in the 2010 midterms raised the possibility that House Democrats would choose a new leader.

Some House Democrats were upset that Pelosi refused to step down after the losses.

New Jersey Rep. Bill Pascrell, who supported the delay in the leadership elections, spoke outside of the caucus meeting after the vote failed.

“I consider myself one of Nancy Pelosi’s closest friends here in the Congress. I think we missed an opportunity today to send a signal to America that we understand what happened this past election,” he said.

Pascrell said the delay vote was intended to allow more deliberation among the caucus about how they will proceed as the minority party and that the attempt to postpone the leadership elections was not intended to question Pelosi’s leadership. Pelosi is faced a challenge to her leadership from Rep. Heath Shuler of North Carolina.

It was hard to find a Democrat leaving the party’s caucus meeting who had anything bad to say about Pelosi – a sign of a more liberal makeup of the caucus after many conservative Democrats lost their seats in the midterms.

Rep. James Moran of Virginia described a Democratic caucus, which shrunk by at least 60 members, as more in line with Pelosi.

Pelosi was targeted by many Republicans during the 2010 campaign cycle – she was featured in a a slew of negative ads – and RNC Chairman Michael Steele even boarded the “Fire Pelosi” bus for a tour across America to rally Republicans.

After the election Republicans changed a “Fire Pelosi” sign hanging above RNC headquarters in Washington to say “Hire Pelosi” – evidence that the GOP also wanted Pelosi back as leader of House Democrats, to be used as a foil.