The myth of the Catholic swing vote

With President Obama’s meeting with Pope Francis Thursday, it’s a good time to reexamine the importance of the Catholic vote in America.

“The Catholic vote” is often looked to as a “swing vote” in American politics. Dating back to 1960 — when John F. Kennedy’s Catholicism was a central issue in the presidential campaign — data suggests that Catholics have voted with the winner of every presidential election, with the exceptions of 1968 and 2000. (Democrat Al Gore, who won the popular vote in 2000 and won Catholics narrowly, lost the election to George W. Bush, who won the electoral vote.) 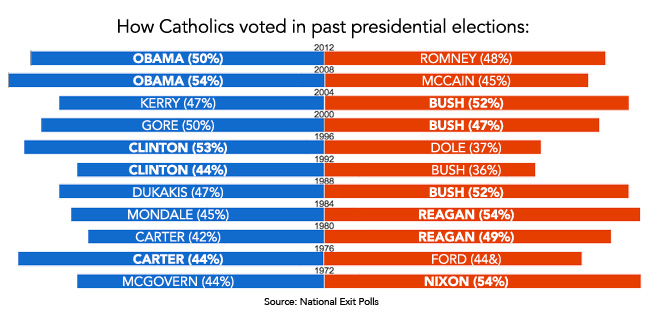 But it’s not quite so simple.

It’s something of a myth that Catholics, who make up about one-in-four voters, are swing voters. They don’t vote as a monolith. Data shows that they vote more in line with their political ideology rather than their religion.

For decades, Catholics have been engaged in an intra-religious fight over emphasis. The church has liberal views on economic welfare, social justice and the death penalty. But it also holds conservative views on abortion, contraception, gay rights, whether women can be priests and if priests can get married.

Call it the “Kennedy Catholics” versus the “Pro-Lifers.”

The increase in Latinos nationwide was a big part of President Obama’s success with the Catholic vote in 2008 and 2012. Obama won a whopping 71 percent of Hispanics in the 2012 election, according to the exit polls.

Note: The graphic above has been updated to correct the percentages for the 2004 presidential race.