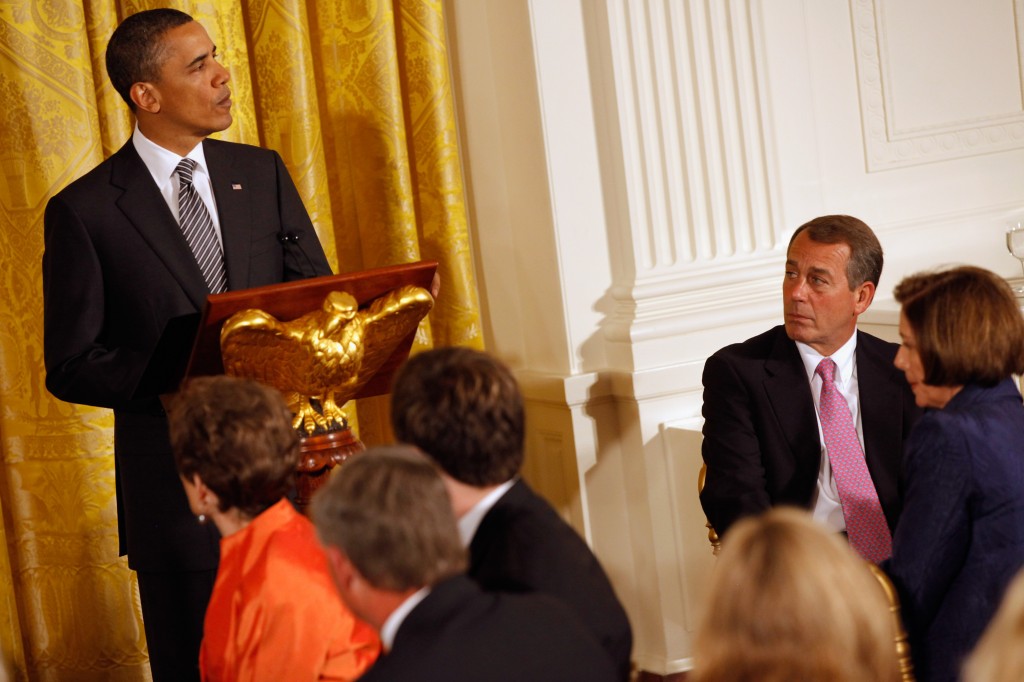 WASHINGTON — Americans may not agree on much lately, but one opinion is nearly universal: There’s almost no chance that President Barack Obama, a Democrat, and the Republican Congress can work together to solve the country’s problems.

A new Associated Press-GfK poll finds just 13 percent of Americans are confident the leaders, separated by nearly 2 miles of Pennsylvania Avenue, can work together, while 86 percent have no such faith. That’s far more than the 58 percent who felt that way just after the 2010 midterm elections in which the tea party movement rose to prominence.

The doubts cross party lines: Fewer than 1 in 5 Democrats or independents have confidence the two sides can cooperate. Republicans are even more pessimistic, with just 1 in 10 confident Obama and Congress can work together.

Those who lack confidence spread the blame around: 41 percent say neither side would do enough to work together, 35 percent place more blame on the Republicans, 22 percent on the president.

Neither side holds much hope things are going to get better, either. Just 16 percent think the president is likely to restore public trust in government in the next two years, while 20 percent feel congressional Republicans will.

Robert Cole, 65, says both Democrats and Republicans deserve blame for Washington’s stalemate: “If you want to place the blame, it rests on the American voter.”

“They’re not doing their jobs, and we as the electorate are stupid in sending the same people back and expecting things to change,” said Cole, a retiree who lives in Ocala, Florida.

But not everyone sees cooperation as a positive.

“In my view, the Republicans were doing what they needed to do to block a harmful agenda coming from the executive branch,” said Ron Tykoski, 42, a paleontologist from Nevada, Texas.

What does the public think they’ll be able to do?

A majority say Obama is likely to prevent Congress from repealing the health care law passed in 2010, while nearly half say the GOP is likely to block Obama’s executive order on immigration. Another 42 percent think the GOP will block or roll back Obama’s environmental regulations. Fewer think either side will be able to enact the policies on their agenda.

Tamara Watson, 35, a high school teacher in West Columbia, South Carolina, said immigration and health care are the two issues where both sides do need to work together. She sees Republicans as the bigger roadblock.

“They have fought him his entire term and a half now, and there’s so many of them now,” she said. “It’s going to be very difficult for (Obama) to work with them when there are so many of them versus so few of his party.”

Approval ratings for the president and Congress are about the same as before the election, with 41 percent approval for Obama and 15 percent Congress. In general, however, the public expresses greater frustration with politics now than they did four years ago.

Just 37 percent say they’re hopeful when they think about the results of the elections, well below the 65 percent saying so after the 2010 elections, when the GOP took control of the House of Representatives, or the 74 percent who felt so when Obama was elected the nation’s first black president. Only 1 in 5 Americans under age 30 describe themselves as hopeful, fewer than any other age group.

But Cole says this hasn’t turned him away from politics.

“As aggravating as it is, I’m still paying attention just to see if I can find somebody out there who is going to do more than talk about cooperating and find a way forward,” he said.

The AP-GfK Poll of 1,010 adults was conducted online Dec. 4-8, using a sample drawn from GfK’s probability-based KnowledgePanel, which is designed to be representative of the U.S. population. The margin of sampling error for all respondents is plus or minus 3.4 percentage points.

Respondents were first selected randomly using phone or mail survey methods and later interviewed online. People selected for KnowledgePanel who didn’t otherwise have access to the Internet were provided access at no cost to them.

What is antifa? A look at the movement Trump is blaming for violence at protests

Officers criticized for use of force at protests about police brutality

WATCH: Trump says if governors don’t crack down on protests, he will ‘quickly solve the problem for them’