Nearly half of states are facing budget shortfalls. Here’s why that matters.

But Trump and congressional Republicans’ evolving fiscal plans have created uncertainty at the local level, too, as states scramble to get their finances in order while planning for potential federal tax cuts. Both Mr. Trump and House Speaker Paul Ryan have said they want to overhaul the federal tax code, a move that could lower taxable income at the state level as well.

“States aren’t starting out in a good place, and things could possibly get much, much worse very quickly,” said Richard Auxier, a researcher at the Urban Institute, an economic policy research group.

Nearly half of all states are projected to have budget shortfalls for the fiscal year 2018, according to the National Association of State Budget Officers, a nonpartisan research organization.

Alaska, Connecticut, Nebraska, Oklahoma and Oregon all face deficits of around $1 billion. And proposed cuts to federal spending is making budget planning even more difficult.

In the short term, states are proposing massive cuts to some of their programs. Connecticut, which must address a $1.3 billion deficit, is taking a two-pronged approach. Democratic Gov. Daniel Malloy’s proposed budget includes about $200 million in new taxes, and would cut back on state employee labor costs and shift teacher pension costs to cities and towns.

Missouri Gov. Eric Greitens, facing a $460 million budget shortfall, proposed cutting $146 million from the state’s current budget. About $82 million of that would come from higher education. Greitens’ proposed $27.6 billion budget did not include any tax hikes.

At a press conference outlining his plan earlier this month, Greitens, a Republican, said he was confident the state’s education officials could “tighten their belts, just like the rest of us, help us focus on excellence, and get back to the basics.”

But some fiscal watchdogs said balancing the budget would require broader changes.

“This isn’t simply a matter of ‘we’re running short this year,’” said Traci Gleason, a spokeswoman with the Missouri Budget Project. “We have made a series of policy decisions over the past several decades that have starved our state of the services that can grow our economy and create good quality jobs.”

Many states are still grappling with federal spending cuts put in place during the recession, which put a major strain on state and local budgets. As the country emerged from the downturn, many governors cut taxes in hopes of boosting economic growth.

But in many cases the projected growth never materialized, Auxier said. States also made steep cuts of their own during the recession and kept them in place afterward, leaving little padding in their budgets.

Technology has also exacerbated the problem. Historically, states have relied on tax revenue from goods purchased within state lines. But online shopping has upended that model, causing a portion of states’ tax revenue to evaporate.

“States also made steep cuts of their own during the recession and kept them in place afterward, leaving little padding in their budgets.”

And as the country’s population ages, older consumers have also started spending less money on tangible goods, like homes and cars, and more on services such as health care that bring in less tax revenue.

When it comes to federal spending, Trump has not released his budget proposal yet. But he has promised large cuts to reduce “tremendous waste.” Congressional Republicans are outlining their own budget proposals that could drastically change how Congress allocates federal funds.

Defense spending, Medicare, Social Security and interest on the national debt make up more than 80 percent of the federal budget. Given that reality, “the first thing on the chopping block are [usually] the funds that trickle down to state and local governments,” Auxier said.

Many of the plans being floated by Republicans would give states more control over how they spend the federal dollars, but would provide less funding overall, forcing states that want to make up the gap to look elsewhere for funding.

Health care is the “single biggest issue” in budget battles

Health care will be front and center in the coming budget fights at the federal and state level.

House Republicans have floated a plan to repeal and replace the Affordable Care Act that would phase out the law’s Medicaid expansion. The plans could include creating a system of block grants instead that would give states more autonomy but less federal funding for health care.

Such an overhaul would impact states, like California, that chose to expand Medicaid under President Barack Obama’s health care reform. 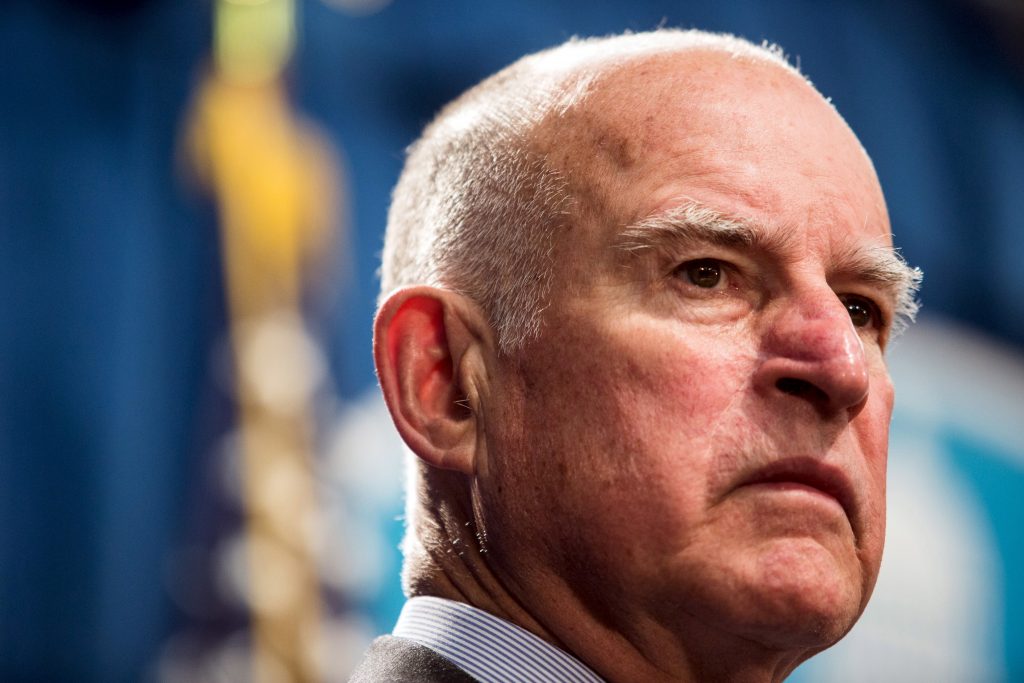 California receives more than $20 billion in ACA-related funding each year, according to the California Budget & Policy Center. If the state lost that funding, it would have to decide whether to drop health care coverage for millions of its residents or cut back spending elsewhere to make up the difference.

“The single biggest [budget] issue for us is the Affordable Care Act,” Chris Hoene, the policy center’s executive director, said.

“We can’t budget something that hasn’t happened yet,” Brown said at the press conference. He added: “It’s going to be a rough ride, and we cannot tell where we will be in a few months.”

But officials in other states said they were less worried about being caught off guard by the Trump administration. Scott Fitzpatrick, the Missouri House of Representatives’ Budget Committee chairman, said he was confident the state would be able to fend for itself.

“Our congressional delegation, including Sen. [Roy] Blunt, is a pretty good advocate for us at the federal level,” said Fitzpatrick, a Republican. Blunt, who is a member of the Senate GOP leadership team, “will be a key component to make sure that Congress doesn’t do something that devastates our state budget,” he added.

Missouri has less to lose than some of its counterparts, at least when it comes to health care spending. Like many conservative-governed states, Missouri did not expand Medicaid through the Affordable Care Act.

“You should be honest with your residents that this is what we’re facing,” Auxier said. “There are things you can do. They are just tough political decisions.”