White House officials, members of Congress and reporters remained fixated Thursday on the identity of a senior administration official who wrote an anonymous op-ed in the New York Times describing a “quiet resistance” inside the Trump administration that actively blocks President Donald Trump’s agenda.

Yet as the guessing game over the article’s author continued, the discussion in the Capitol was already shifting to the wisdom of writing the piece in the first place, and what impact it will have on a president who feels increasingly under attack by the media and special counsel Robert Mueller’s Russia investigation.

The story will “lead to further turmoil in a White House that already has a lot of turmoil,” said Ari Fleischer, who served as White House press secretary under President George W. Bush.

The op-ed came out the same week that details emerged from Washington Post reporter and editor Bob Woodward’s new book, “Fear,” about the atmosphere of chaos and dysfunction in the White House under Trump. In the book, several senior administration officials, including Chief of Staff John Kelly and Defense Secretary Jim Mattis, are described making disparaging remarks about Trump.

“There’s clearly a rising Republican tide of opposition to Trump, and he will not handle that well,” said Mike Murphy, a Republican consultant who opposed Trump’s candidacy in 2016. “We Never Trumpers in the Republican Party were so few and so lonely. But now our ranks are growing and it’s about damn time.”

‘We Never Trumpers in the Republican Party were so few and so lonely. But now our ranks are growing.’

Murphy and others argued the op-ed signals an important shift in Trump’s presidency, even if it did not come as a surprise.

As a practical matter, the story could have the unintended consequence of destabilizing Trump and his inner circle even further, said Ramesh Ponnuru, a conservative commentator and editor at the right-leaning National Review.

“It’ll make the White House more paranoid than it has been before,” Ponnuru said. “It will make President Trump more resistant to sober advice than he already was, which doesn’t seem like a good thing for the country.”

The op-ed underscored just how little confidence some administration officials and Republicans in Congress have in Trump’s ability to handle the presidency. 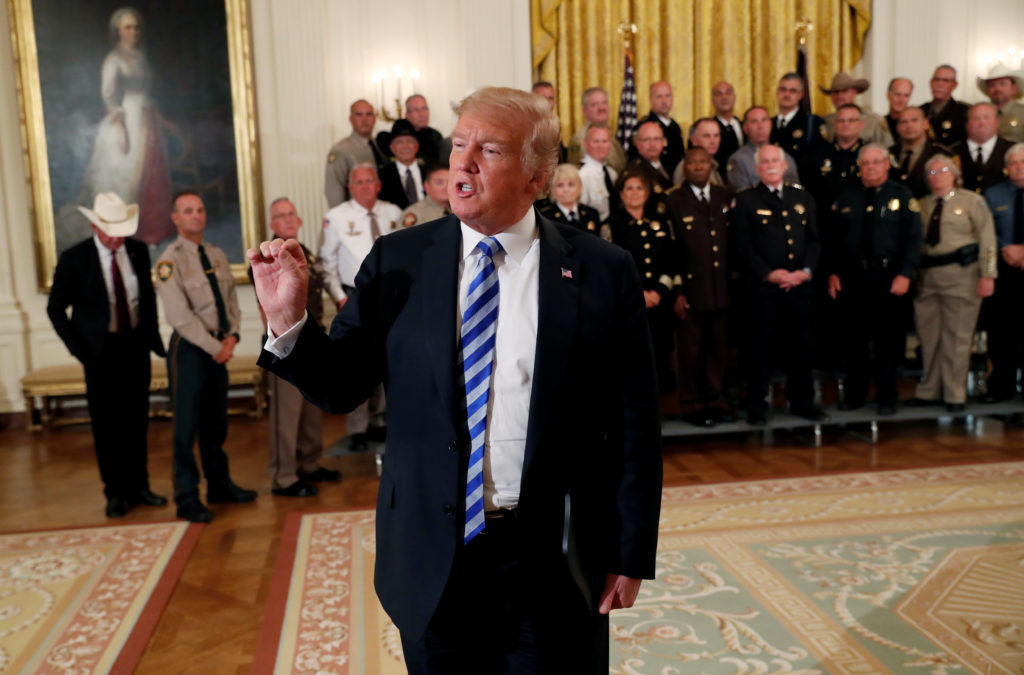 President Donald Trump first lashed out at the New York Times for its op-ed at an event at the White House on September 5, 2018, shortly after the article was published. Photo by REUTERS/Leah Millis

The piece called Trump’s leadership style “impetuous, adversarial, petty and ineffective,” said the president makes “half-baked, ill-informed and occasionally reckless decisions,” and claimed that “many” senior administration officials “are working diligently from within to frustrate parts of his agenda and his worst inclinations.”

Still, Ponnuru cautioned against reading too much into the op-ed for clues about how it might impact Trump’s long-term political agenda.

“If the president had a legislative agenda then the lack of confidence among Republicans in his leadership would imperil that legislative agenda,” Ponnuru said. “But there is no such agenda to be imperiled. All he wants out of Congress is to confirm his judges and not investigate him.”

What’s more, Fleischer argued, the piece won’t be seen by most voters outside the Beltway as a pivotal moment in Trump’s presidency, or do much to change the public’s perception of him. “I really think in the scheme of things that drive elections, this op-ed is a drop in the ocean,” he said.

Trump supporters seized on the article as proof of the existence of a “deep state” opposition to the president within his administration. White House officials slammed the author of the op-ed, members of Trump’s cabinet denied writing it, and Trump lashed out at the New York Times on Twitter.

“Does the so-called “Senior Administration Official” really exist, or is it just the Failing New York Times with another phony source?” Trump wrote Wednesday on Twitter, after criticizing the paper during an appearance at the White House. “If the GUTLESS anonymous person does indeed exist, the Times must, for National Security purposes, turn him/her over to government at once!”

White House press secretary Sarah Huckabee Sanders said the Times should apologize for publishing the story, and called its author a “coward” who “should do the right thing and resign.”

Thomas Patterson, a political scientist at the Harvard Kennedy School, said the anonymous op-ed would fuel the view held by many Trump supporters that the president has been treated unfairly by the press and establishment Republicans in Washington.