CONCORD, N.H. — It’s been 100 years since New Hampshire held its first presidential primary, and it seems like some of the current candidates have been hanging around for nearly that long. More than a few started popping up a full two years before Tuesday’s state election, and nearly all have spent recent months hosting town hall meetings, holding rallies and meeting voters.

Here are details about the primary and what to look for:

State law requires polls to be open between 11 a.m. and 7 p.m. Tuesday, but each town and city sets its own hours. Most allow voting between 8 a.m. and 7 p.m., with a handful opening polls as early as 6 a.m. and about 20 remaining open until 8 p.m. And three tiny towns — Hart’s Location, Dixville and Millsfield — have permission to open their polls at midnight and close them moments later once everyone has voted. Altogether, there are 319 polling locations — cities and larger towns have multiple wards.

Secretary of State Bill Gardner expects the total number of ballots to be cast Tuesday to top the records set in 2008, the last time both sides had contested races.

That year, just over 241,000 ballots were cast in the GOP primary and just under 289,000 in the Democratic primary, which amounted to nearly 60 percent of registered voters. On Tuesday, he’s predicting 282,000 Republican ballots will be cast, and 268,000 Democratic ballots.

Independent voters, officially known as “undeclared,” can vote in either primary, and can revert back to undeclared status immediately afterward. As of Feb. 5, there were 882,959 registered voters: 44 percent were undeclared, 26 percent were Democrats and 30 percent were Republicans.

New voters can register at the polls on primary day.

Yard signs stuck in snow banks are a New Hampshire primary staple, but that was a rare sight until the final days of the campaign. Much of the state saw very little precipitation until a pair of storms in the final days before the primary, including a storm Monday that made for a lot of slipping and sliding in the southern and eastern parts of the state. Only flurries are forecast for primary day, so voters shouldn’t have any problem getting to the polls.

In 1913, Rep. Stephen Bullock traveled by horse and buggy from his Richmond farm to Concord to propose a bill creating the primary. The Legislature passed it that spring, and after some tweaking of the law two years later the first presidential primary was a held in March 1916.

While other states beat New Hampshire that year, New Hampshire has had the first primary since 1920. It wasn’t until 1952, however, that voters cast ballots for candidates directly instead of choosing delegates. Since then it has snowballed, with much media attention and maneuvering to remain ahead of other states. State law requires the primary to be held seven days ahead of any other similar contest, and long-serving Secretary of State Bill Gardner has fought repeated attempts to usurp his state’s position.

Unlike other states, it’s cheap and easy to get on the ballot in New Hampshire: Candidates sign some paperwork and hand over a $1,000 check to the secretary of state. This year, a near record 58 White House hopefuls signed up — 30 Republicans and 28 Democrats.

All but three of the candidates are men. Democrat Hillary Clinton and Republicans Carly Fiorina and Chomi Prag are the only female candidates. 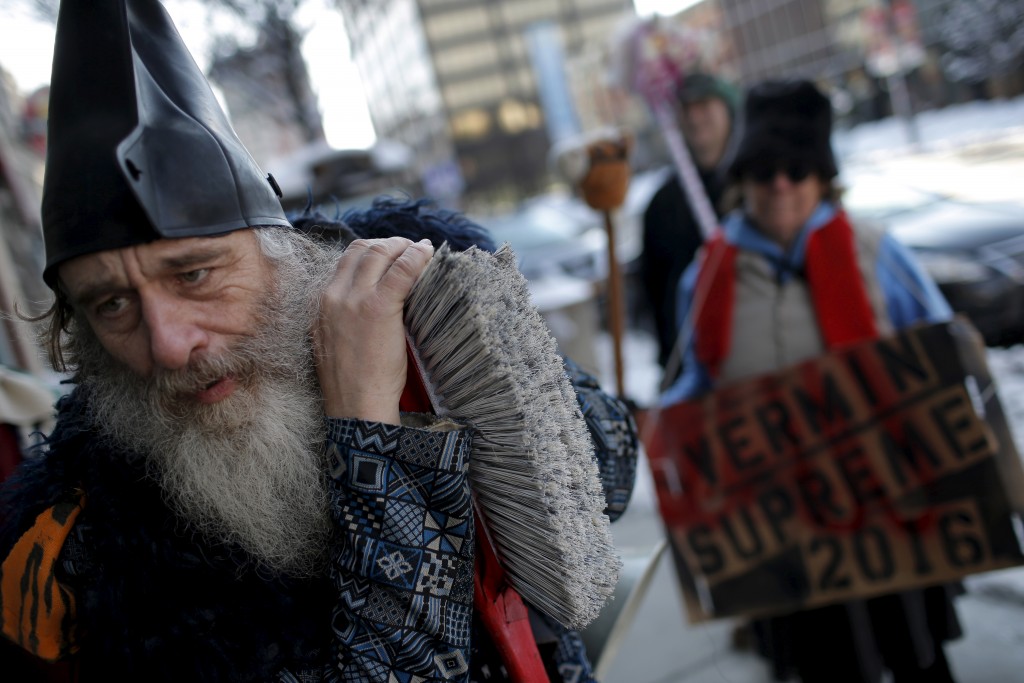 This year’s crop included some familiar faces, including Edward O’Donnell of Bridgeport, Pennsylvania, a Democrat making his seventh run. Perennial candidate and performance artist Vermin Supreme also signed up at the secretary of state’s office, wearing his signature rubber boot on his head. He’s touting a plan to provide every American with a pony.

The sponsor of the original bill creating the primary wanted to give average citizens a greater say in the election process, and proponents of the primary argue that New Hampshire has continued to embrace that ideal more so than other states. New Hampshire elects its governor and huge 424-member Legislature every two years, making campaigning a near constant and giving voters plenty of practice to hold candidates accountable.

While critics also argue that New Hampshire is too small and too white to play such a major role in picking presidents, its defenders say the country — and the candidates — are well-served because the primary requires close contact with voters, not just name-recognition or advertising cash. In the last 10 elections, the winner of the Republican primary went on to become the eventual nominee eight times; on the Democratic side, seven winners went on to become nominees.