New poll: 54% of Americans think Trump’s dealings with Russia were unethical or illegal

More than half of Americans say they don’t fully trust President Donald Trump’s dealings with Russia or Russian President Vladimir Putin, and 47 percent say the country’s hacking of the 2016 election poses a major threat to the United States, according to a new PBS NewsHour/NPR/Marist College poll.

More than a third of Americans — 36 percent — think Trump has done nothing wrong while dealing with Putin, compared to 54 percent who believe Trump’s dealings with Russia have been “unethical” or “illegal,” the poll found. Nearly one in three Americans think Trump has committed ethics violations, and another 25 percent believe he has broken the law, according to the poll.

But 10 percent of Americans say they just aren’t sure. And partisan politics largely dictated the respondents’ views: 73 percent of Republicans defended the president, along with nearly a third of those who identified as Independents. The vast majority of Democrats (80 percent) and Independents (58 percent) said the president acted unethically or illegally. Only 4 percent of Republicans think Trump broke the law and another 15 percent said he acted unethically. 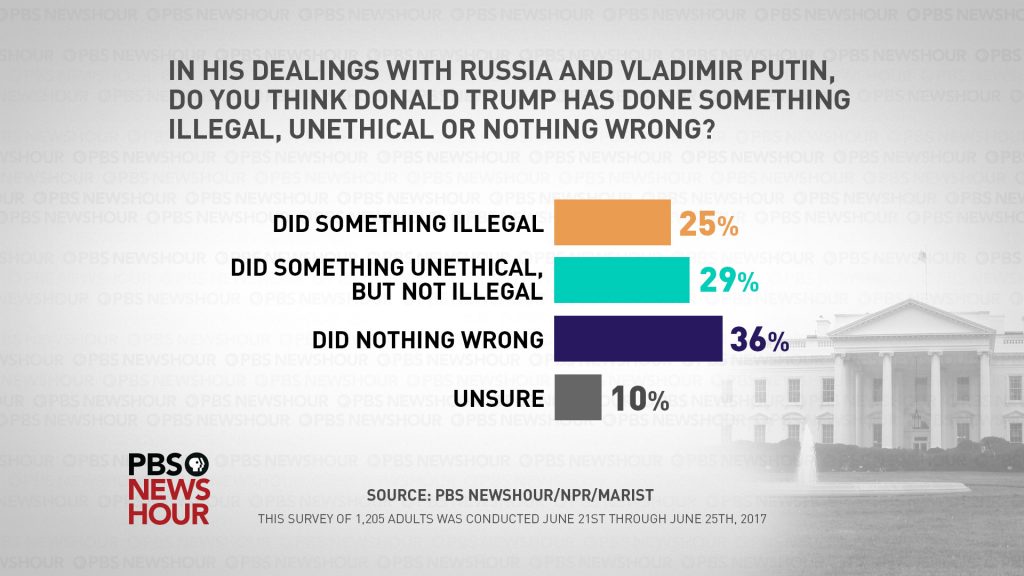 The responses mirror a Marist poll in February, which found that four out of 10 Americans believed Trump had done nothing wrong in his dealings with Putin. At the time, another three out of 10 U.S. adults said he acted unethically, but not illegally. That was before the president fired FBI Director James Comey, and before Robert Mueller was appointed as the special counsel charged with leading the federal probe into the Trump campaign’s relationship with Russia.

The vast majority of Democrats and Independents said the president acted unethically or illegally in dealing with Russia. Only 4 percent of Republicans think Trump broke the law; another 15 percent said he acted unethically.

“When you put Trump into the equation, the partisan divide returns to the data very quickly,” said Lee Miringoff, who directs the Marist Institute for Public Opinion.

Americans are split on whether Trump or Putin is the better leader. Four out of 10 U.S. adults said Trump is more effective, while nearly as many — 36 percent — said Putin was stronger. One-fifth of Americans said they weren’t sure. The responses also fell along party lines: 75 percent of Republicans stood behind the president their party nominated, while 50 percent of Democrats said Putin was better at his job.

The question reflected changes in American attitudes about Putin in the past few years. In February, a fifth of Americans told Gallup they held a favorable opinion of Putin — a big jump from 2015, when just 13 percent of U.S. adults said they felt that way. Interestingly, the most significant rise in Putin’s favorability among Americans came from Republicans. Putin’s favorability among GOP voters went up from 12 percent in 2015 to 32 percent shortly after Trump’s inauguration.

Overall, 59 percent of Americans think the United States should build a stronger relationship with Russia. But the nation can’t decide if Trump’s approach to Russia is good or bad. Forty-six percent of U.S. adults said it is mostly good, and 41 percent said it’s mostly bad. Another 13 percent of Americans didn’t know what to make of it.

As with other questions, though, politics make all the difference on that issue. Seventy-five percent of Republican respondents told pollsters they thought Trump’s work with Russia would benefit the country; fewer Democrats (22 percent) and Independents (44 percent) agreed. 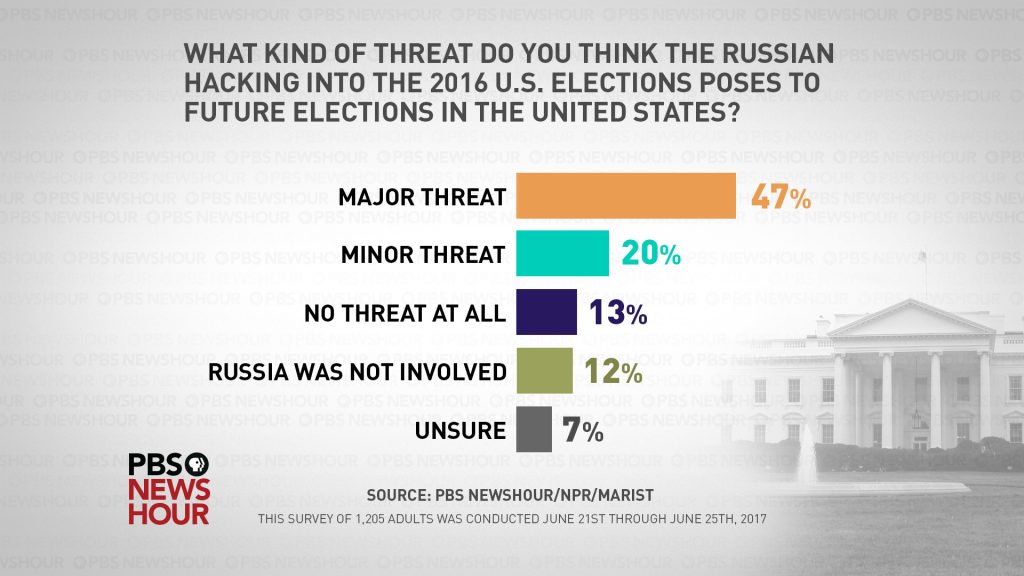 MORE: Robert Mueller is expanding the Russia probe. Here’s how.

The PBS NewsHour/ NPR/ Marist College Institute for Public Opinion poll contacted 1,205 U.S. adults using landline and mobile phones between June 21 and June 25. There is a 2.8 percent margin of error.

Editor’s note: This article has been updated to reflect that 36 percent of U.S. adults said Putin was a stronger leader.