North Carolina’s legislature tried to strip power from the new governor. Will other states do the same?

North Carolina’s GOP-controlled General Assembly stunned political observers last December with its decision to target Cooper after he beat Republican Gov. Pat McCrory in an unusually rancorous election that ended in a recount.

But a similar post-election power grab likely won’t happen in New Jersey and Virginia, the only two states with gubernatorial elections this year, officials there said.

New Jersey lawmakers said the state legislature would have a harder time stripping authority from a governor in a state with a powerful executive branch.

“[That’s] not the Virginia way,” said State Sen. Frank Wagner (R-Va.), who is running for governor.

“The Virginia legislature is stronger than North Carolina’s,” State Sen. Creigh Deeds (D-Va.) said. “We just don’t pass the kooky bills they do. We do pass our share of silly things, but we have a good checks and balances system.”

The fight in North Carolina played out in a special session as McCrory was preparing to leave office. The state legislature passed two laws limiting Cooper’s power before he entered office earlier last month.

Combined, the laws left Cooper significantly weaker — and led him to sue the legislature to overturn the laws even before he took office. Cooper expanded the lawsuit after becoming governor, and the suit hasn’t been settled yet. 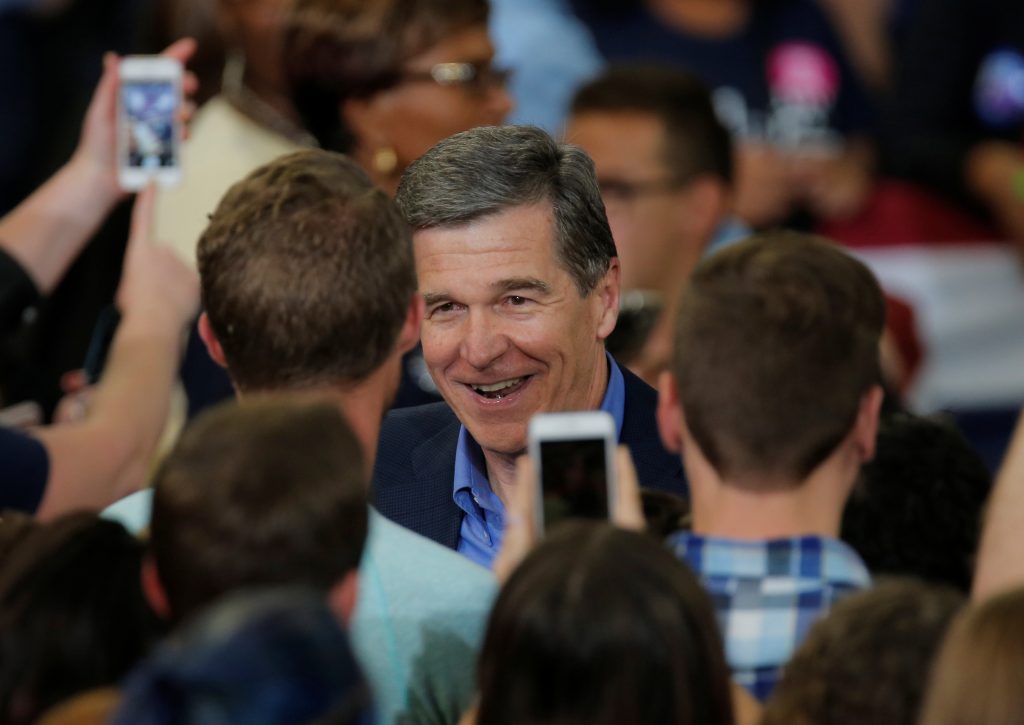 Roy Cooper at a campaign event in 2016. Cooper, who won the North Carolina governor’s race last year, is now locked in a legal battle with the state’s GOP-controlled legislature. Photo by Chris Keane/Reuters

The partisan fight has fueled speculation that the losing parties in New Jersey and Virginia would try something similar in 2017, after elections to replace outgoing Govs. Chris Christie and Terry McAuliffe. Both Christie, a Republican who sought the party’s 2016 presidential nomination, and McAuliffe, a Democrat, cannot seek reelection.

In New Jersey, the fight to replace Christie is already taking shape. On the Democratic side, Phil Murphy, a former Obama administration official and Goldman Sachs executive, and State Assemblyman John Wisniewski have entered the race.

In Virginia, Democratic Lt. Gov. Ralph Northam is running against former representative Tom Perriello for the Democratic nomination. Republican strategist Ed Gillespie, Wagner, and Corey Stewart, the chairman of the Prince William Board of County Supervisors, have all thrown their hats in the ring in the GOP primary. Stewart also ran President Trump’s Virginia campaign operation last year.

Republicans control both chambers of Virginia’s state legislature. Democrats are in control in New Jersey, with a majority in the state senate and general assembly.

The gubernatorial contests will be closely watched in the run-up to the 2018 mid-term elections, and could serve as an early referendum on a range of Trump administration policies, from immigration to health care.

The Trump presidency is “going to inform the atmosphere one way or the other and we don’t know yet how it is going to develop,” State Sen. John Edwards (D-Va.) said. “The politics of Washington are likely to have spillover effect.”

Though Edwards downplayed the chances of a North Carolina-style power grab in Virginia, he noted that the state has seen its share of partisan battles in recent years, including McAuliffe’s move to restore voting rights to thousands of ex-felons.

Ciattarelli, the New Jersey state assemblyman and gubernatorial candidate, said he expected the Garden State wouldn’t take North Carolina’s lead. But anything could happen, he added.

“This isn’t the first or last time that a legislative body will look to curtail the executive powers of a governor or a president,” he said.

Left: The New Jersey State House in Trenton. New Jersey and Virginia are the only two states with gubernatorial races in 2017. Photo by Emile Wamsteker/Bloomberg via Getty Images