DES MOINES, Iowa — Proponents of President Barack Obama’s Supreme Court nominee believe they have a new winning argument to get the Republican-led Senate to act — the prospect of Donald Trump choosing someone to fill the vacancy.

President George W. Bush appointed Pryor, Alabama’s former attorney general, to the 11th U.S. Circuit Court of Appeals. Pryor has angered those on the right and left, backing the ousting of Chief Justice Roy Moore over his failure to remove a Ten Commandments monument and calling the Roe v. Wade decision legalizing abortion “the worst abomination in the history of constitutional law.”

“If he’s going to appoint people like that I don’t have any doubt,” Grassley said after a weeklong recess week back home in which liberal activist groups were relentless in pressuring the senator to hold hearings on Garland.

Grassley, who is seeking a seventh term, faced billboards and demonstrations as he met constituents at town halls around the state.

Obama nominated Garland on March 16 to fill the vacancy created by the death of conservative Justice Antonin Scalia in February. While some Senate Republicans have held courtesy visits with Garland, they refuse to hold hearings or vote on his nomination.

Outside of the Iowa Judicial Branch building in Des Moines a former Grassley supporter said the longtime senator has lost his vote.

Ken Blackledge, 66, a produce farmer from Nevada in central Iowa and registered independent voter, said he has known Grassley for decades and voted for him because of the independent-minded Midwestern values he shared.

“I’m not voting for him anymore because he’s not the Chuck that he was,” Blackledge said. “He’s more of a Washington Beltway-type person now which isn’t the person I know.”

Democrats and outside groups targeted Grassley because of his chairmanship of the Judiciary panel. Obama administration allies also have focused on vulnerable Republican senators in states such as Ohio, New Hampshire, Pennsylvania and Wisconsin that Obama won twice.

Grassley said the strategy isn’t working and he’s doesn’t feel any more threatened in this race than previous ones.

“I approach every election as if it’s going to be the toughest election I’ve ever had and this one’s no different,” he said. 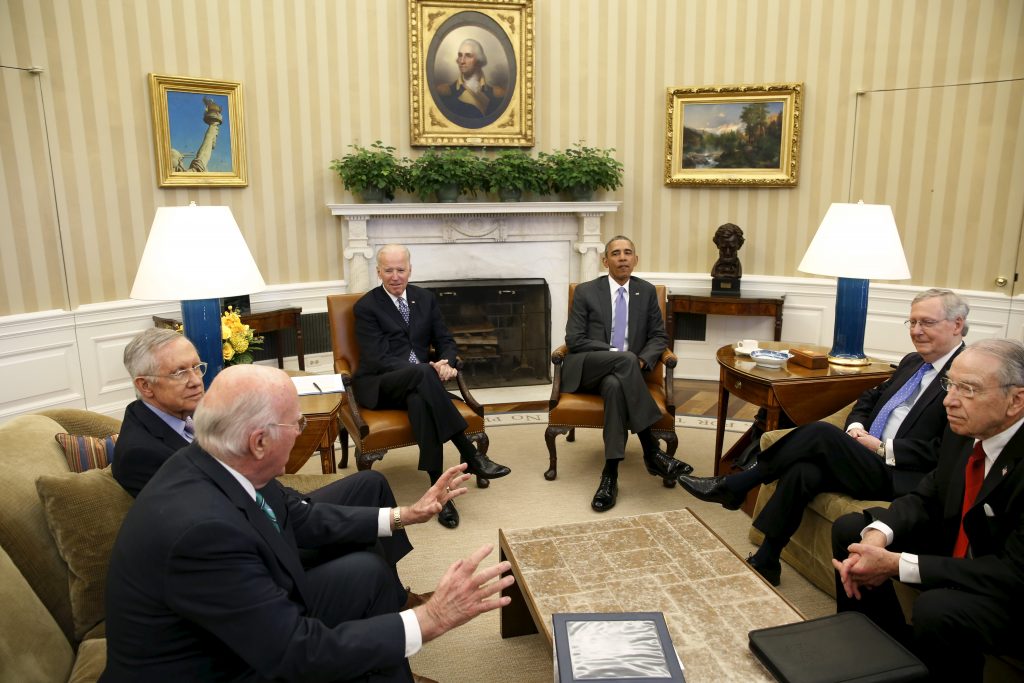 He did acknowledge that at nearly every stop on his weeklong tour of Iowa town halls he was asked about the court.

Moveon.org, a liberal political action group, said it is buying a roadside billboard in Des Moines and plans Internet video and social media campaigns against Grassley.

The day after Trump won in Indiana and became the likely GOP nominee, Americans United for Change issued a statement. “It’s official. Senator Grassley is refusing to do his job because he wants Donald Trump — a racist, sexist, misogynistic, nativist, isolationist, pathological liar … to make the next appointment to the Supreme Court,” said Brad Woodhouse, the group’s president.

The group organized mobile billboards featuring the “Tell your Senator: Do Your Job” theme, parking them at offices of senators running for re-election in nine swing states. In Iowa, a billboard was following Grassley to several of his town halls.

Grassley hasn’t faced a close election in decades. He won his Senate seat in 1980 — the year Ronald Reagan became president — with 54 percent of the vote.

“It’s going to backfire. If there is one thing Iowans hate is a politicizing of the courts and when you do it with millions in outside special interest money it doesn’t work,” said Tim Albrecht, a political adviser hired this week by the Republican Party of Iowa to help with the U.S. Senate campaign. Albrecht has worked on GOP campaigns since 1999 including the Mitt Romney and Jeb Bush campaigns.

Grassley said refusing to consent to Obama’s nominee is a legitimate use of the Senate’s advice and consent power provided in the Constitution.

“Sen. Grassley wasn’t elected by Sen. McConnell, he was elected by the people of Iowa,” Obama said.