With South Dakota visit, Obama is the fourth president to visit all 50 states while in office

Until Friday it was the only state still awaiting a visit from President Barack Obama.

But there is no Mount Rushmore on the schedule. The president is delivering the commencement address on the eastern end of the state at a two-year technical institute, a chance to promote his proposal for free community college and to become the fourth president to set foot on all 50 states.

It was a milestone the White House was observing by posting an online exhibit of photographs from each state taken by White House photographer Pete Souza. In at least one case, a visit is a liberal description. Obama flew into Nebraska in August 2012 to make a drive to Council Bluffs, Iowa. He was in the Cornhusker state less than a half hour. 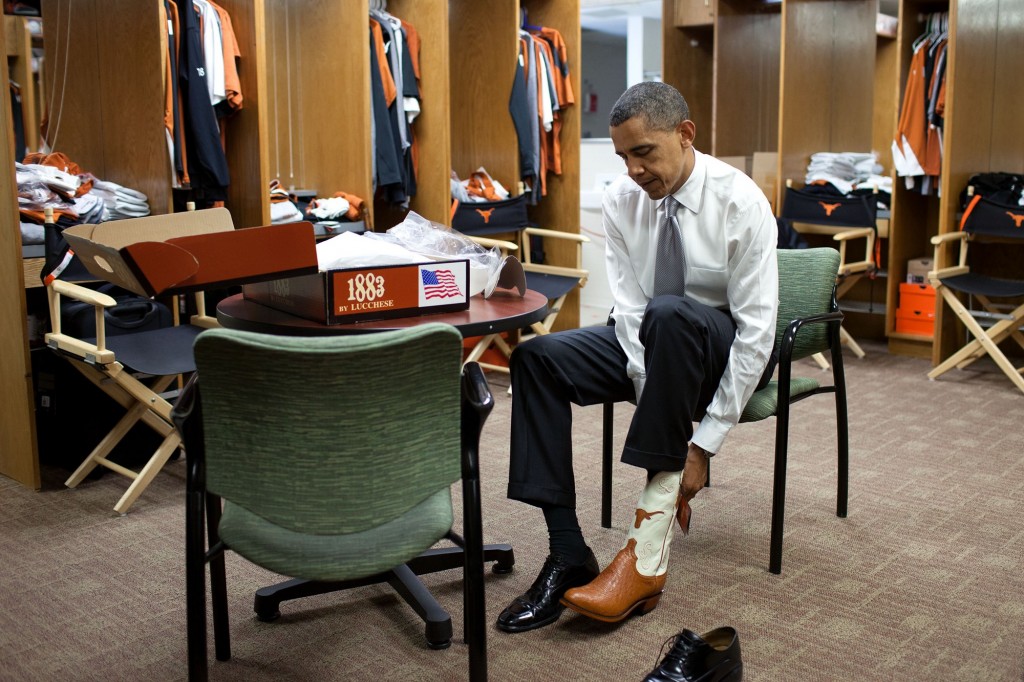 Texas, Aug. 9, 2010. Trying on a pair of cowboy boots at the University of Texas in Austin. Photo by Pete Souza/White House

At the start of the year, Obama had visited 46 states. The White House promptly set up appearances in two of the four remaining states — Idaho and South Carolina — followed by Utah in April. It’s no coincidence that the four are reliably Republican states.

Still, Obama did visit South Dakota as a candidate in 2008 while campaigning for the party’s nomination. Last year he spoke in North Dakota on the Standing Rock Indian Reservation that straddles South Dakota.

The only other presidents to hit the 50-state mark were Richard Nixon, George H.W. Bush and Bill Clinton.

Obama will deliver the commencement address at the Lake Area Technical Institute graduation ceremony in Watertown.

The school is among the nation’s top community colleges, recognized for rigorously preparing its students and for having a two-year graduation rate that’s higher than the national average.