Obama urges nation not to give in to fear

Speaking from the Oval Office for just the third time during his presidency, but offering few new proposals, President Barack Obama on Sunday pledged to continue his current strategy against the Islamic State overseas, while also encouraging American Muslims to root out extremism in their own communities.

“Muslim leaders here and around the globe have to continue working with us to decisively and unequivocally reject the hateful ideology that groups like ISIL and al Qaida promote,” Obama said, standing in front of a podium with photos of his wife and daughters behind him.

Obama sought to reassure the nation after the mass shooting in San Bernardino, California, last week that left 14 people dead and 21 injured. He also urged Americans to reject Islamophobia and not turn their backs on American Muslims. 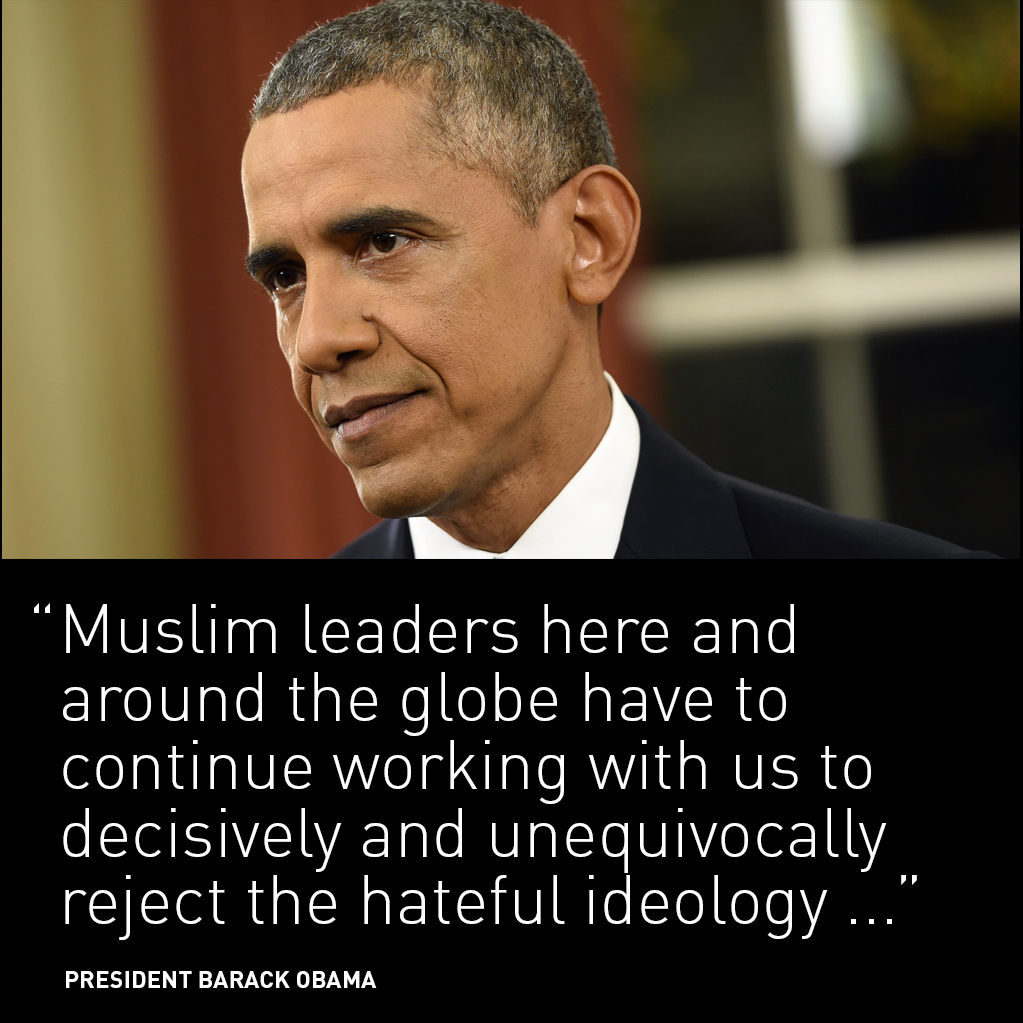 The speech comes on the heels of the Obama administration’s announcement over the weekend that the San Bernardino shooting was an “act of terrorism,” making the shooting the deadliest terrorist attack in the United States since 2001.

In the speech, the president offered a message of resilience and strength, but he also repeated his request that Congress formally authorize military operations against the Islamic State, despite a growing chorus of critics in Congress and on the campaign trail who have argued that the White House is not doing enough to stop the group’s spread.

Current air strikes and other military operations are being carried out under congressional authorization passed in 2001 in the wake of the 9/11 attacks. Republican leaders in Congress have resisted the president’s request for a vote on an ISIS-specific authorization.

The president also urged Congress to pass several measures that would make it more difficult for would-be attackers to enter the United States and gain access to assault weapons.

The venue for the speech underscored the importance that Obama and his advisers have placed on the threat posed by ISIS, and the extent to which the president has been forced to focus on the group as his time in office winds down.

The White House believed that speaking from the Oval Office would “convey the seriousness” of the issue, a senior administration official told reporters before the speech. 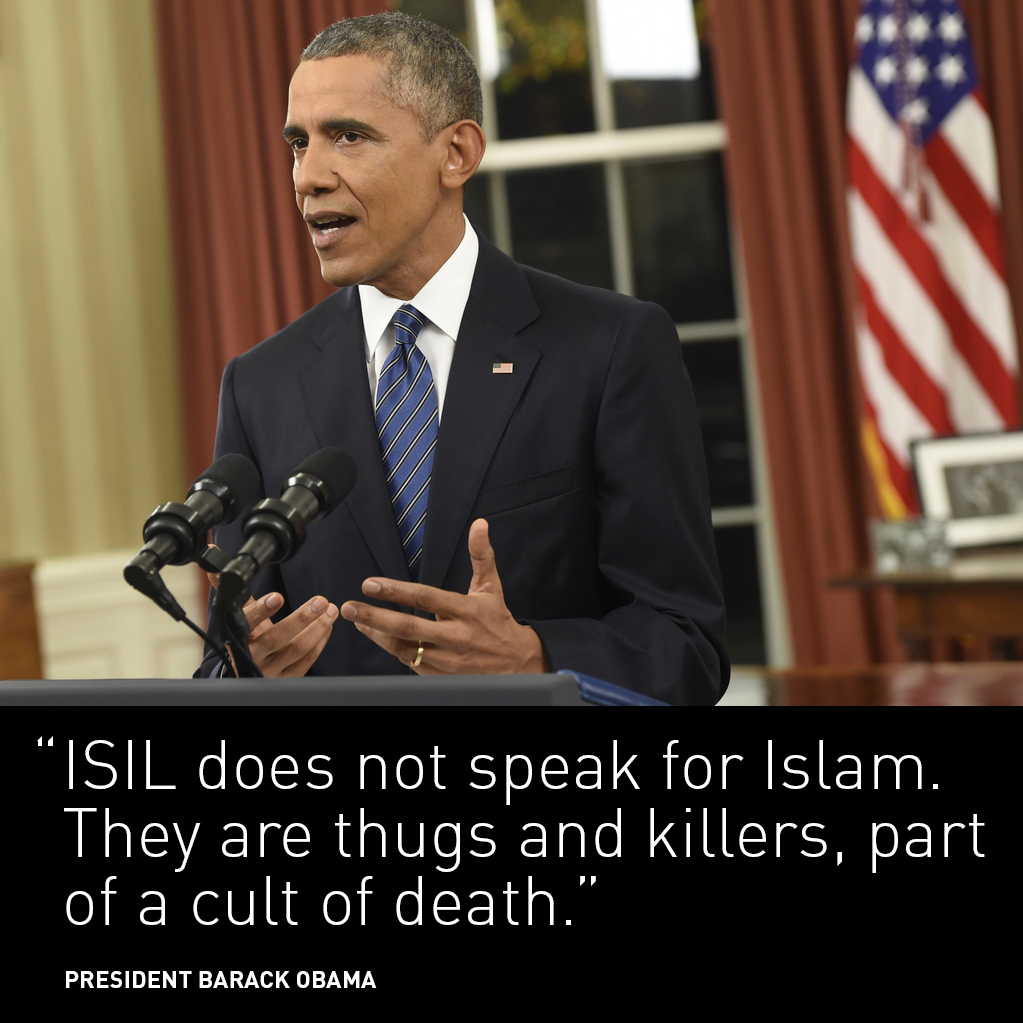 Before Sunday, President Obama had only delivered two speeches from the Oval Office: in 2010, in response to the BP oil spill, which killed 11 workers and dumped nearly 5 million barrels of oil into the Gulf of Mexico; and later that year, when the president announced the end of combat operations in Iraq.

The president worked on the address through the weekend, using the Islamic State’s deadly attacks on Paris last month and last week’s San Bernardino shooting as a starting point to hold a broader discussion with the public about the threat of terrorism and the administration’s efforts to protect Americans at home, the adviser said.

The setting also offered Mr. Obama an opportunity to expand on his initial comments about the San Bernardino shooting and put his stamp on a national conversation about terrorism and gun control that has reached a fevered pitch since the shooting in California on Wednesday.

READ MORE: Obama says ‘Terrorist threat has evolved into a new phase’
“It’s an election year, there’s a lot of voices out there that have been making their opinions heard since the San Bernardino shooting, and the president has not had his voice in there,” said Amy Walter, a political analyst and the editor of the Cook Political Report, said. 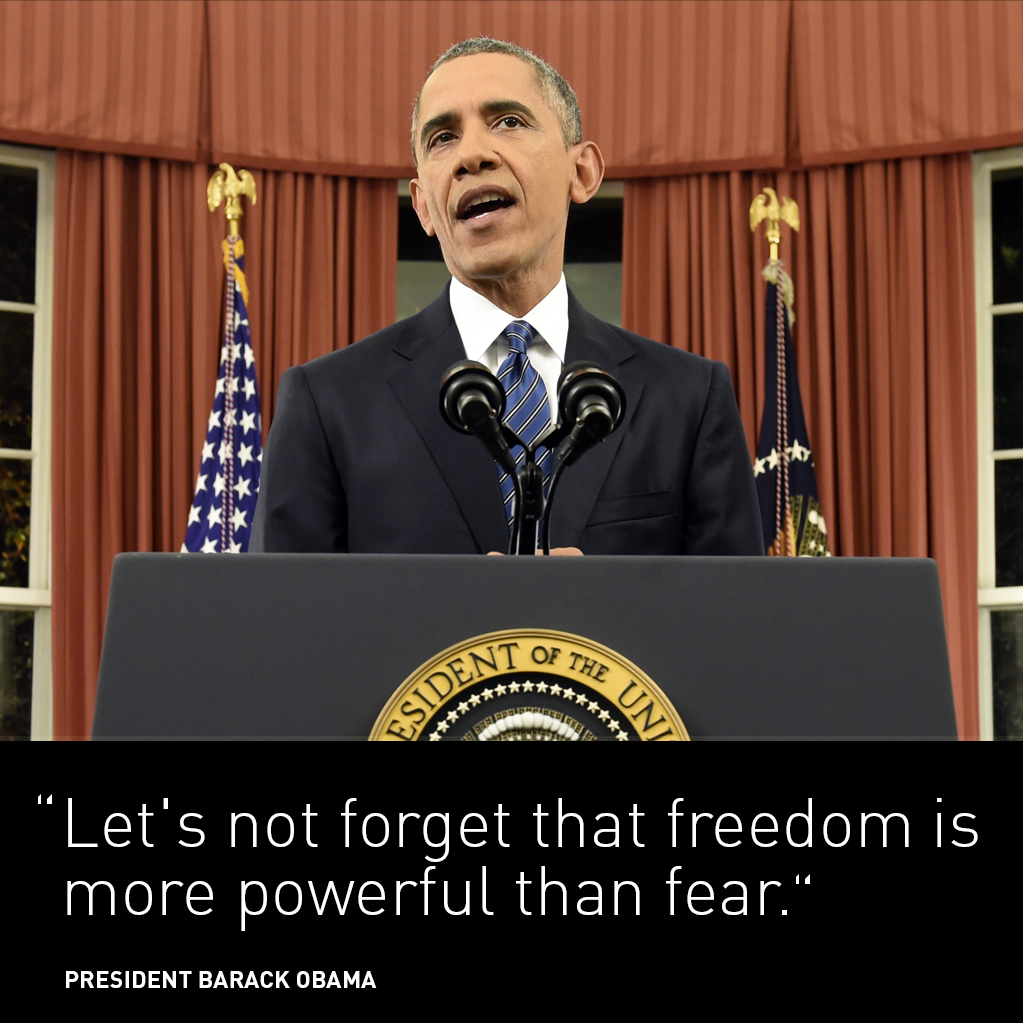 “You have a country right now that’s very concerned about what this means,” Walter added.

Still, the speech did little to mollify Obama’s critics.

“President Obama offered no changes to his reactive, indirect, and incremental strategy,”

Republican Sen. John McCain of Arizona said in a statement after the speech.

Speaker of the House Paul Ryan, R-Wisc., was similarly unimpressed.

“The enemy is adapting, and we must too. That’s why what we heard tonight was so disappointing: no new plan, just a half-hearted attempt to defend and distract from a failing policy,” Ryan said in a statement.

One area of potential agreement between congressional Republicans and the White House is a proposed change to the visa waiver program Obama singled out in his Oval Office address.

A vote on the issue could hit the House floor as early as Tuesday. The proposal would mean that people from countries with expedited access to the U.S. — like America’s Western European allies — must go through extra screening if they are from or have traveled to Iraq, Iran, Syria or Sudan in the past five years. House Majority Leader Kevin McCarthy, R-Calif., predicted that policy would become law.

Former Obama advisor Dan Pfeiffer tweeted that the speech’s intended audience was not the Beltway media.

Pundits and reporters: you are not the audience, POTUS is focused on the larger audience that doesn't follows these things as closely as you

Mr. Obama, likewise, made no mention of his congressional critics in his speech, which lasted just under 15 minutes, choosing instead to focus on engaging directly with the American public.

“I am confident we will succeed in this mission because we are on the right side of history,” Obama said. “I have no doubt that America will prevail.”