Republicans are embracing President Donald Trump’s upcoming rally in Tulsa as a symbolic step in reopening the economy from the pandemic, while Democrats are worried it will contribute to a spike in coronavirus cases and provoke further unrest in a city with a deep history of racial violence.

The tension surrounding the president’s first campaign rally since the country shut down in mid-March has laid bare a growing partisan divide over the pandemic and the nationwide protests against police brutality.

“As best I can tell, there’s nowhere in the world that’s doing large indoor events,” said state Rep. Monroe Nichols, a Democrat who represents Tulsa. “Definitely not events with 20,000 people in the middle of a global pandemic. It’s just not a thing.”

Trump’s rally Saturday is “a worst case scenario. It’s a perfect storm for the further spread of the virus,” Nichols added.

Oklahoma has seen a sharp rise in the number of confirmed COVID-19 cases since the state lifted most restrictions related to the pandemic earlier this month. Tulsa County has the largest number of cases of any county in the state, according to state data.

The rally will take place inside the BOK Center, a 19,000-seat arena in downtown Tulsa owned by the city and managed by a private firm. Trump has claimed the campaign received more than 1 million ticket requests, and predicted the rally will be filled to capacity and draw an overflow crowd of 40,000 people.

The event won’t violate state guidelines around the pandemic. There have been no restrictions on public gatherings in Oklahoma since June 1, when the state entered the third phase of its reopening plan. Under the plan, put in place by Republican Gov. Kevin Sitt, there is “no limit to group size provided event organizers, local officials, or businesses consider social distancing.”

Trump campaign manager Brad Parscale announced Monday that before entering the venue every attendee would receive a temperature check, hand sanitizer and a face mask. “There will be precautions for the heat and bottled water as well,” he wrote on Twitter.

‘It’s a perfect storm for the further spread of the virus.’

“I do understand the thinking” that the rally could pose a public health risk, said Steve Curry, the Republican National Committeeman for Oklahoma. “If you have an immune deficiency disorder, or you’re in a high level risk category, you shouldn’t be showing up to the rally. You should be staying home,” added Curry, who is planning to attend the event.

But the timing is right for Trump to resume normal campaign activities, Curry argued, so long as the right safety measures are in place.

“This is just part of that process of getting back to some sense of normalcy, and from a political standpoint, being able to get the president’s message back out there,” Curry said.

But state and federal public health officials say it’s still too early to hold a large gathering, especially indoors where the virus can spread more easily than in the open air.

Dr. Bruce Dart, the public health director for the city and county of Tulsa, said last week that Trump should consider postponing the rally, citing the recent rise in COVID-19 cases. Tulsa County reported 96 new cases Tuesday, more than double the highs set in April, when the state was only weeks into its shutdown. 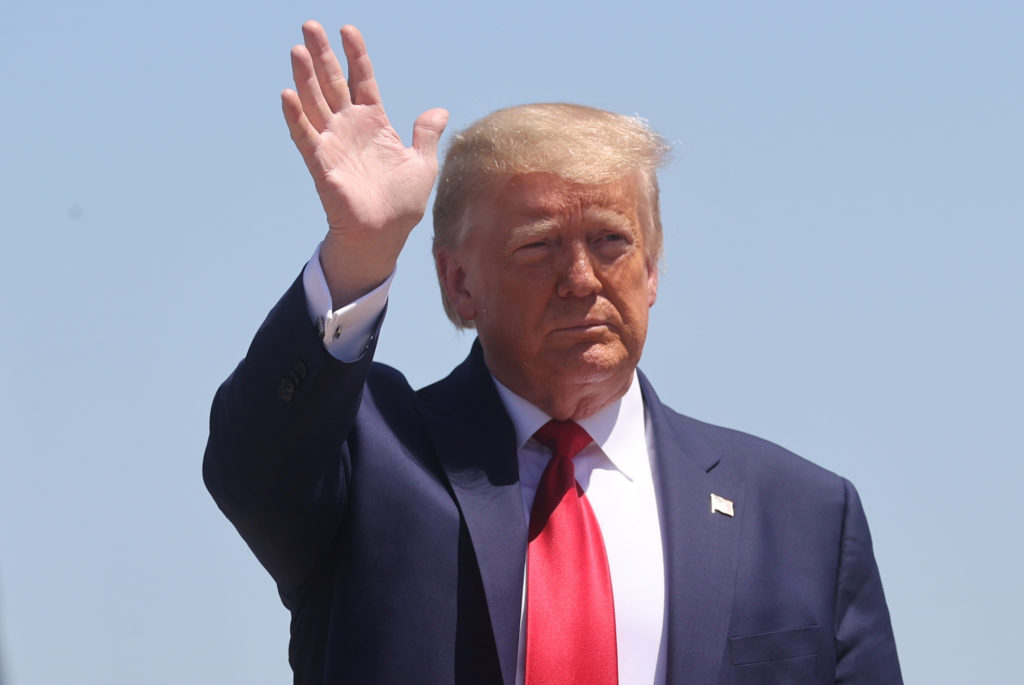 According to Tulsa County health department statistics, the seven-day rolling average of cases spiked to 73.9 Tuesday, up from 17.4 on June 1.

Dr. Anthony Fauci, the Trump administration’s top infectious disease expert, also weighed in on the rally in Tulsa, saying this week that he wouldn’t attend and suggesting that an outdoor campaign event with “no crowd” was preferable to a crowded indoor gathering.

The safety measures the Trump campaign plans to have in place at the rally are a “step in the right direction,” said Randolph Hubach, a public health professor at Oklahoma State University. But social distancing will be hard to do in a crowded arena, and many attendees will likely follow Trump’s lead and decline to wear a mask, he said.

“What happens when those people return home, back to work, going to get their haircut, going on with their day-to-day lives?” Hubach said. The most likely outcome is a “clustering of disease that starts to spread within social networks.”

Local officials in Tulsa said they were concerned the rally and the governor’s push to reopen the state would undo the city’s efforts to slow the spread of the virus. And some expressed anger at being left out of the planning around the rally and not having a say over whether to allow Trump’s visit.

“We were literally holding a city council meeting [last] Wednesday when breaking news alerts came on our phones saying that the Trump rally was coming. We had no idea whatsoever,” said Vanessa Hall-Harper, the vice-chair of the Tulsa City Council.

A Tulsa County spokesperson wrote in an email that they were not aware of any effort by the Trump campaign to reach out to the county to coordinate planning around the rally.

The Trump campaign did not respond to a request for comment.

A spokesperson for Tulsa Mayor G.T. Bynum wrote in an email that planning for the rally was coordinated by the Trump campaign and the venue management firm that runs the arena. Michelle Brooks, the communications director for the city of Tulsa, said the city did not sign a contract or issue a permit for the event.

The Trump campaign is paying for costs associated with holding the rally inside the venue, but the city is expected to incur expenses related to providing security outside of the arena, Brooks said. The city’s police department could also face additional costs if more security is needed to respond to protests around the rally, she said.

“We will do what we need to do to coordinate in advance and then respond to events as they occur,” Brooks said.

In a statement Tuesday, Bynum made clear the Trump campaign did not consult with the city about holding the rally. “I didn’t even know the invitation had been extended until BOK Center management contacted the City regarding Police support for the event,” Bynum, a Republican, said in a post on Facebook. 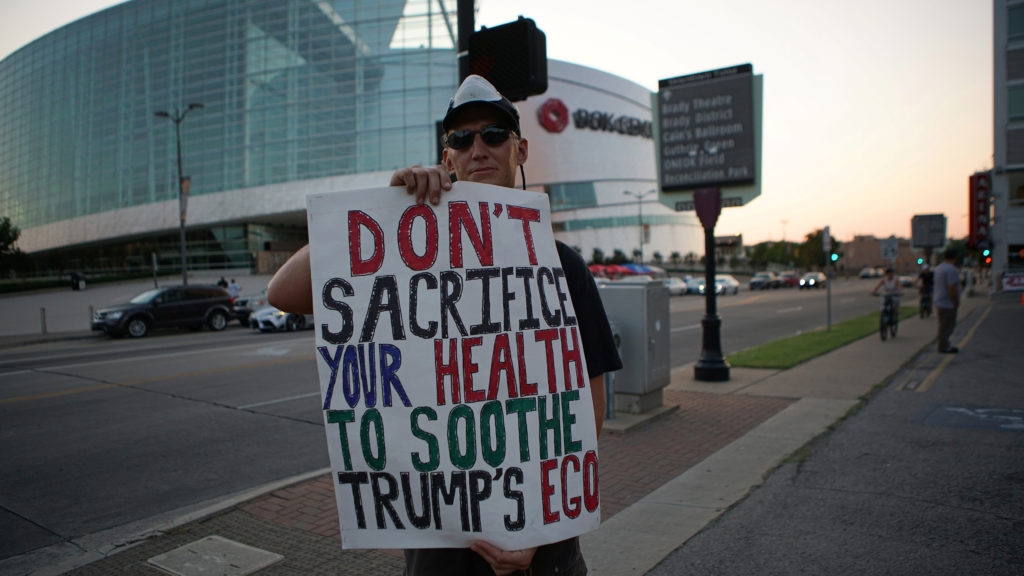 A non-supporter of President Donald Trump camps outside the BOK Center ahead of the president’s first campaign rally since early March. REUTERS/Lawrence Bryant

Bynum said he shared others’ “anxiety about having a full house” at the arena, but ruled out challenging the state guidelines allowing for large public gatherings. He also said he would not invoke the city’s “emergency authority” to try to block Trump’s visit.

Curry also argued that Trump was being unfairly criticized for holding a rally during a period when thousands of Americans have been protesting in response to the police killing of George Floyd in Minneapolis last month. The sentiment echoed Trump’s claims on Twitter that the media was trying to “Covid Shame us on our big Rallies.”

Democrats dismissed the criticism, saying the protests were not taking place indoors and did not come with an official seal of approval from the president. They also noted that former Vice President Joe Biden, the presumptive Democratic nominee, has not held rallies since early March in response to the public health crisis.

And many Democrats were still fuming at the timing and location of the rally. It was originally scheduled to fall on Juneteenth, the holiday commemorating the end of slavery. Tulsa is also the site of a race massacre in 1921 in which white rioters killed as many as 300 black residents.

Trump moved the rally back one day after an outcry over the overlap with Juneteenth. The president told the Wall Street Journal that a black Secret Service agent had explained the holiday’s meaning to him amid criticism over the initial rally date.

But Juneteenth will be celebrated throughout the weekend, not just on Friday, said Hall-Harper, who is black and represents the predominantly black northeast section of Tulsa.

The rally remains a “slap in the face to the black community,” she said, made worse by the fact that the pandemic is disproportionately affecting people of color.

“Campaign season is gearing up and he needs some wins,” Hall-Harper said of Trump. “He’s going to come to where he thinks is a safe space in order to try to get some public wins. But the reality is he’s putting Oklahomans at risk.”

Left: Trump supporters pose for photos with a giant Trump flag outside BOK Center, the site of President Donald Trump's first political rally since the start of the coronavirus pandemic, June 18, 2020 in Tulsa, Oklahoma. (Photo by Win McNamee/Getty Images)