AUSTIN, Texas — Former Texas Rep. Ralph Hall, the oldest-ever member of the U.S. House and a man who claimed to have once sold cigarettes and Coca-Cola to the bank-robbing duo of Bonnie and Clyde, has died at age 95.

The Republican and World War II pilot died at his home in Rockwall on Thursday morning, said Ed Valentine, Hall’s longtime strategist. Asked about a cause of death, Valentine simply cited Hall’s age, saying he hadn’t been suffering from any known long-term health problems.

Hall was 91 when he left the House after being defeated in a 2014 Republican primary runoff election by John Ratcliffe. The former U.S. attorney was less than half Hall’s age and well-schooled in digital and data-heavy campaigning.

An avid jogger, Hall marked Memorial Day 2012 — when he was 89 — by skydiving to honor American service members. That Christmas, he became the oldest member of Congress’ lower chamber, breaking the record set by North Carolina Rep. Charles Manly Stedman, who died in office when he was 89 years, 7 months and 25 days old.

“I’m just an old guy — lived pretty clean,” Hall said after breaking the record. “I have no ailments. I don’t hurt anywhere.”

Hall, who flew Hellcat fighters during World War II, was known in Congress for promoting NASA and energy production.

Getting ousted by his own party in 2014 came a decade after Hall became a Republican as Texas moved further to the right. He served 12 terms in Congress as a Democrat but announced in January 2004 that he’d made the switch, backed by his friend, then-President George W. Bush.

In a statement Thursday, Bush said “Ralph Hall epitomized decency, class, and patriotism.” Republican Texas Gov. Greg Abbott said the former congressman “distinguished himself as a fiercely independent voice who put the needs of his constituents above all else.”

Hall, who flew Hellcat fighters during World War II, was known in Congress for promoting NASA and energy production. Hailing from Rockwall, east of Dallas, he was fond of saying that he voted with his party often but always voted with his district.

He was probably most popular for mailing or personally handing out pennies fitted with a special silver band bearing his name.

Only three U.S. senators were older than Hall while still serving in Congress: South Carolina Republican Strom Thurmond, who was 100 when he retired in 2003; Democrat Theodore Francis Green of Rhode Island, who left the Senate at age 93; and West Virginia Democrat Robert Byrd, who died in office in 2010 at age 92. 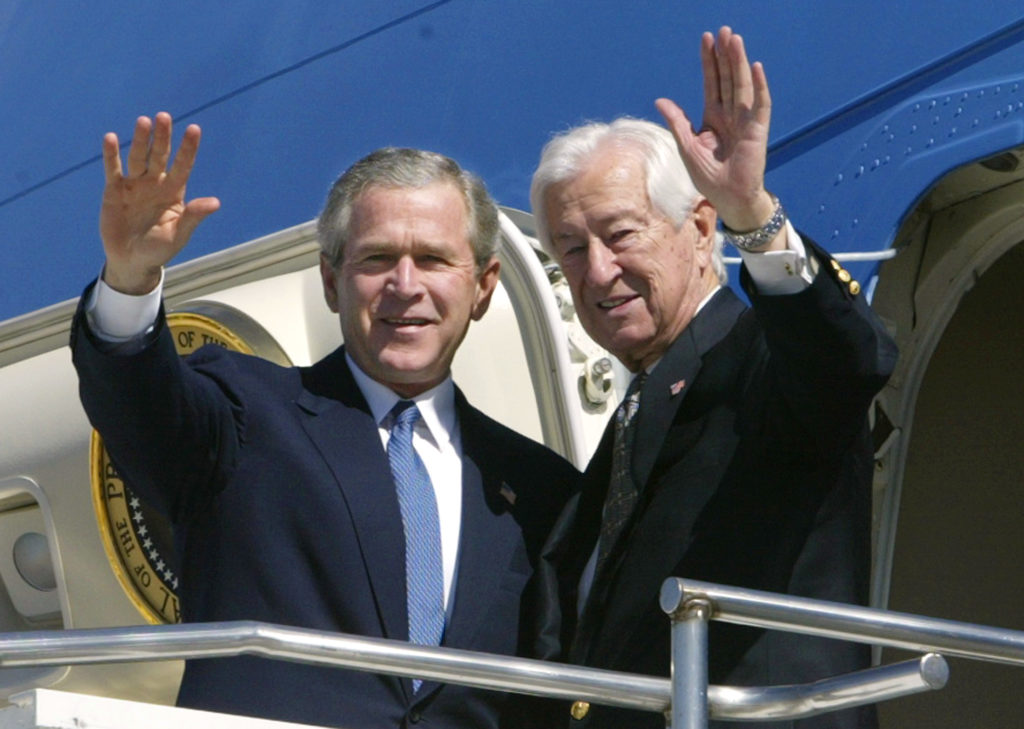 U.S. President George W. Bush and Rep. Ralph Hall, R-TX, wave from the steps of Air Force One upon its arrival in Dallas, Texas, on March 8, 2004. Hall switched parties from Democrat to Republican after nearly a quarter-century as one of the most conservative Democrats in Congress. Photo by Kevin Lamarque/Reuters

Hall stuck to retail politicking, preferring to greet voters personally rather than organize formal campaign stops. That was enough to retain his House seat in 2012, when he bested a tea party primary opponent.

But in 2014, Ratcliffe painted his opponent as a Washington insider, noting that Hall had represented the district long enough to have an airport, lake and highway named after him.

Hall tried to modernize, joining Twitter in 2013 and marking former President Ronald Reagan’s 102nd birthday with his first Tweet. But that proved no match for Ratcliffe, who ran unopposed in the deeply red district in the November 2014 general election.

Ralph Moody Hall was born on May 3, 1923, in the Dallas suburb of Fate. He attended Texas Christian University and the University of Texas before earning a law degree at Southern Methodist University in 1951.

While working in a pharmacy in his hometown as a boy, Hall said then-fugitives Clyde Barrow and Bonnie Parker used curb-side service. Hall said they bought “two cartons of Old Golds, two Coca-Colas and all the newspapers we had.”

While working in a pharmacy in his hometown as a boy, Hall said then-fugitives Clyde Barrow and Bonnie Parker used curb-side service.

“He was a funny looking little guy. She was acceptable looking,” Hall said in 2014. “I saw them. But I don’t think it’s that unusual. They were a lot of places.”

Hall joined the Navy at 19. He married Mary Ellen Murphy in November 1944, while serving in Pensacola, Florida. The couple had three sons: Hampton, Brett and Blakeley.

After World War II, Hall practiced law in Rockwall County, where he served as a judge from 1950 to 1962. He was elected the following year to the Texas Senate and ran unsuccessfully in the 1972 Democratic primary for lieutenant governor.

Winning a U.S. House seat in 1980, Hall was among the Democratic conservatives who sided with President Ronald Reagan on budget issues. He voted against the North American Free Trade Agreement and was an original co-sponsor of bills to repeal the estate tax and the marriage tax penalty.

After becoming a Republican, Hall leaned heavily on Bush, a former Texas governor. In 2009, he opposed the federal bailout of the financial industry and the economic stimulus package, and was a harsh critic of federal health care reform when it was debated and ultimately approved by Congress in 2010.

After the primary defeat to Ratcliffe, Hall injured his hip in car crash, and was away from Washington convalescing for much of the remainder of his final term.

Left: Representative Ralph Hall was the oldest-ever member of the House at age 91. Photo via Wikimedia Commons