KALONA, Iowa — Initially, Becky and Marlin Bontrager disagreed about the number of children they wanted to have. Becky says that she wanted six, while her husband was hoping for closer to four.

They ended up with 10, all of whom were homeschooled on the family’s farm in this small rural town in central Iowa. Today, all of the siblings, who now range in age from eight to 25, tour the country with their parents in a family gospel and bluegrass band.

Early this morning, Marlin and his son Joshua, 19, scanned a to-do list for Iowa caucus day while 21-year-old Allison, the second-oldest daughter, and two of her younger sisters prepared a pumpkin pancake breakfast in the kitchen.

READ NEXT: Here’s how the Iowa caucus works

Marlin Bontrager is one of three national chairmen of Texas Senator Ted Cruz’s “Homeschoolers for Cruz” coalition, which is helping get out the vote in a state where evangelical voters, including many in the homeschool community, will help decide the winner of tonight’s Republican caucuses.

The Bontragers are among Cruz’s most loyal supporters. Everyone in the family, down to Lincoln, 12, who wore a Cruz sticker to the breakfast table, seemed energized by his campaign.

“I love Ted Cruz because he’s passionate about the values I care about,” said Joshua. His mother was more direct: “I think it’s God who is helping him rise to the top,” Becky said.

Spreading the gospel — and politics — through music

This is the first time that the Bontragers, who are both 48, or their children, have been actively involved in a presidential campaign. But in many ways their volunteer work for Cruz, which includes performing at his campaign events, represents an extension of the family’s mission to spread the gospel through music.

The eldest Bontrager children all began playing musical instruments around age 8. Formal music lessons followed, and as the family grew, it started performing at a local nursing home.

In 2005, the Bontrager Family Singers were invited to perform at four state prisons in South Carolina. It was their first experience performing outside state lines. At one of the events, Marlin asked the inmates, a group of about 150 men, to raise their hands if they were fathers. Hands shot up around the room.

“This is the first time ever in my adult life that we’ve had a candidate that I’m fired up about,”

“That hit me pretty hard,” Marlin said, adding that it helped foster a belief that’s now central to his personal politics: “Almost every broken policy in Washington right now can be traced back to the breakdown of the family.”

Visiting the prison, he said, was “a life-changing experience.”

The prisons in South Carolina became a regular stop on a concert tour of Southern churches, jails, and county fairs. Today, the family spends six months a year on the road, performing at venues across the United States, Canada and Mexico.

“We play some bluegrass instrumental pieces, but we’re also focused pretty heavily through our music in giving the gospel of Jesus Christ,” Marlin said.

When the home is the classroom

When they’re not on tour, the Bontragers are back in Kalona, tending to the family’s 500-acre corn and soybean farm. The family also owns a hotel in town, the Dutch Country Inn, and are shareholders in a biodiesel plant in central Iowa.

The family’s five younger, school-aged children devote the first part of their day to reading, math, and other traditional classroom work. They spend the rest of their study time learning through hands-on activities and carrying out chores around the farm. 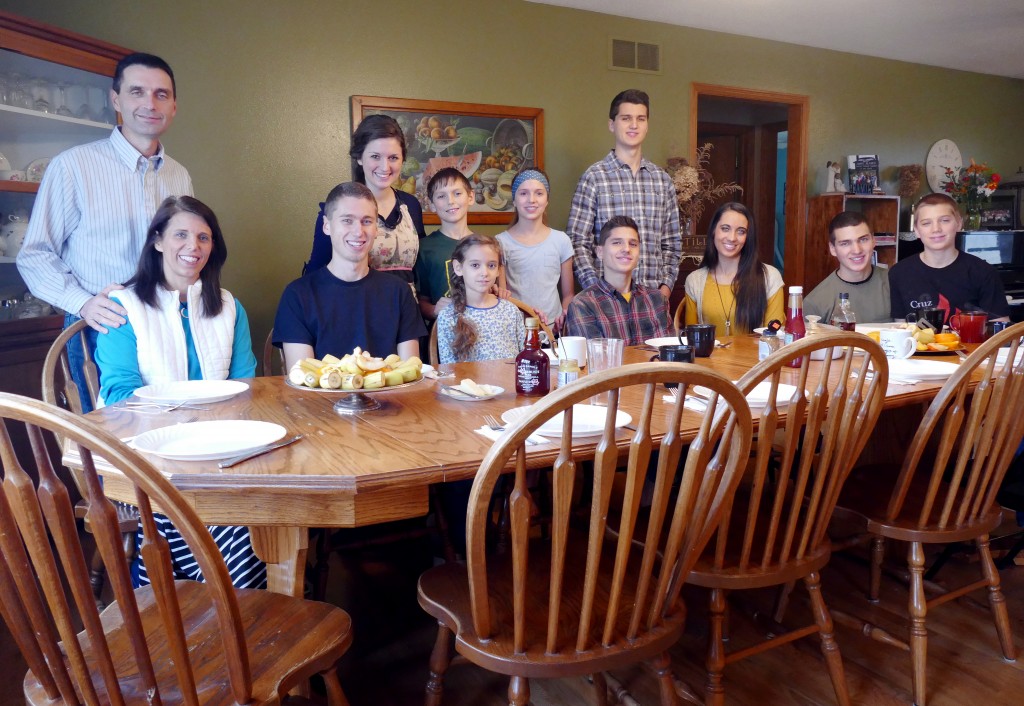 The Bontrager family at home. Photo by Dan Bush

“I’ve got a son, for example, who has much more of a bent in mechanics, so I try to give him as many mechanics jobs as I can,” Bontrager said.

Another son, Mitchell, 23, wants to be a pastor, and is learning how to preach.

Becky, who had the couple’s first five children in seven years and has taken on most of the homeschooling duties, acknowledged that homeschooling wasn’t always easy, especially at first.

“Those were really hard years,” she said in an interview at the family’s farm, adding that at first she felt “totally outnumbered.” But as time went on, Becky said she accepted and even grew to appreciate the many challenges of feeding, clothing and teaching so many children at once. Chelsey, her eldest child at 25, said she plans eventually to raise her family the same way.

“The older I get, the more I realize how much I’ve been blessed to grow up the way I did,” Chelsy said. “I’m super grateful I was homeschooled and raised in a Christian family.”

In some respects, the Bontragers follow a freewheeling curriculum. At the same time, their approach has a coherent educational philosophy rooted in religious study — family members spend time alone each morning reading the bible — and a running conversation about Christian ethics and responsibility that would not take place in a public school.

“It’s very hard to send children to public school and teach them character,” Marlin Bontrager said. At home, the children can learn to “love the Lord and have good Godly character.”

All of the elder Bontrager siblings, including Carson, who is 20, live at home and help out on the farm, though they also have additional jobs and hobbies apart from music and agriculture. Allison, 21, is interested in pursuing a career in editing and public relations; Joshua has thought of running for public office someday.

Between school, farm work, church and touring, the family’s busy schedule left little room for politics in the past.

Marlin Bontrager backed the winner of the 2008 Iowa Republican caucus, former Arkansas Governor Mike Huckabee, but did not become involved in his campaign. The family was on tour in 2012, when former Pennsylvania Senator Rick Santorum won the state’s GOP caucus, and missed out on the excitement surrounding his razor-thin victory over Mitt Romney, the party’s eventual nominee.

“This is the first time ever in my adult life that we’ve had a candidate that I’m fired up about,” Marlin Bontrager said of Cruz.

Iowa’s conservative and largely evangelical Christian home school community is a natural constituency for Cruz, who has cast himself as the outsider Republican candidate most willing to take on the party establishment, liberals, and the mainstream press.

Cruz is proposing a drastic, across-the-board reduction in the size and role of the federal government, including in the area of education.

The freshman senator has pledged to eliminate the Department of Education in order to give states more control over curriculum and testing standards, and has come out in favor of homeschooling and other alternatives to public education.

At the same time, Cruz is an ardent opponent of gay marriage and abortion. He peppers his campaign speeches with passages from scripture, and often laments the decline of religion and traditional family values in American life.

It’s a message that resonates with the Bontragers and other homeschool families across Iowa who were interviewed for this story.

Like Cruz, homeschool advocates underwent their own uphill battle for acceptance in Iowa. Homeschooling was banned in Iowa until 1991, when the state passed a law approving the practice after years of debate and legal battles over the issue.

Today there are more than 10,000 homeschool students in Iowa, according to state data — a tiny fraction of the roughly 500,000 school-aged children in the state. But due to its decades-long campaign for legalization, the homeschool community is far more organized and politically powerful than most people realize.

“Homeschool families are especially politically active, and I think that that comes from the history of the community itself,” said Drew Zahn, the communications director for The Family Leader, a prominent religious rights group headquartered in a suburb outside of Des Moines.

Zahn is a staunch Cruz supporter. He and his wife have had 16 children together, and are homeschooling all of them. Years ago, “there was definitely a stigma” attached to homeschooling, Zahn said.

“I don’t see that as the case at all anymore. Here in Iowa, homeschooling has become part of the mainstream.”

Due to its decades-long campaign for legalization, the homeschool community is far more organized and politically powerful than most people realize.

Small but established voting blocs in Iowa can also make a big difference in the final outcome of the caucuses. In 2012, only 121,503 registered Republicans — or 19.7 percent of the state’s registered GOP voters, on par with the average turnout rate for the party’s Iowa caucuses — voted for a primary candidate. Santorum won the contest by just 34 votes.

In deciding which candidate to support in the Iowa caucuses, Amy Zobel, a mother of five who runs a homeschool association in Cedar County, said she was drawn to Cruz’s hawkish foreign policy platform and opposition to immigration reform. But Cruz’s social values and views on education were also a deciding factor.

“He has a good handle on what America needs,” Zobel said. “I also know that he’s a proponent of homeschooling, and I know he’s a Christian.”

Cruz was not a unanimous choice in the Bontrager household. Initially some of the family members leaned towards Huckabee and Florida Senator Marco Rubio, who is polling in third place behind Cruz and Trump.

Chelsy, the eldest Bontrager sibling, said she quickly switched her allegiance to Cruz after hearing him speak and reading more about his political career. Eventually Marlin’s enthusiasm caught on and the rest of the Bontragers came around. “We wanted it to be a family decision,” Marlin said.

The Bontragers have performed at numerous Cruz campaign events. The senator’s father, Rafael Cruz, a pastor and one of the campaign’s most effective surrogates, spoke at a Labor Day festival on the family’s farm last September, and has appeared twice at the Bontragers’ church in Washington, Iowa.

At a service there last night on the eve of the caucuses, the Marion Avenue Baptist Church’s spacious auditorium was filled with more than 200 parishioners, many of them wearing Cruz campaign buttons and tee-shirts.

The senior pastor, Joseph Brown, endorsed Cruz in a fiery Sunday sermon, before urging his flock to exercise their “God-given responsibility” to go out and caucus. Afterwards, the entire Bontrager clan trooped on stage for a brief live performance.

Cruz is counting on people like Marlin Bontrager to help him win Iowa. If he loses, it will seem in retrospect like a risky bet. But supporters insisted up to the day of the caucus that evangelical voters, and homeschool advocates in particular, would turn out for Cruz.

If Cruz wins, Zahn said, the homeschool community will be “an important part of his rise and success.”

On the farm this morning, Marlin ticked off the list of tasks he had planned for the day: canvassing, calling undecided voters, setting up the caucus precinct. Early on in the primary cycle, the family wasn’t sure Cruz could win.

But with Cruz running a close second to Donald Trump in the final days before tonight’s caucuses, there was growing excitement at the breakfast table that the senator could pull it off.

“It’s not a done deal. We’re just getting started with voting,” Marlin said.

“But he has a prayer,” Chelsy said.

Allison chimed in from the kitchen, where she was almost done making a batch of pumpkin pancakes. “You mean chance,” she said. “What did I say?” Chelsy asked.

Becky smiled. “Allison is the editor in the family.”