Can Campuses Muster Obama Enthusiasm of 2008? 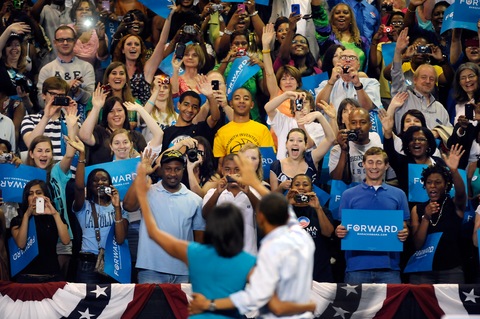 President and Mrs. Obama campaign at Virginia Commonwealth University in Richmond in May. Photo by Sara D. Davis/Getty Images

ANN ARBOR, Mich. — The home of the University of Michigan is in its quiet summer mode in June, as most students have gone home or off to internships. But as the 2012 presidential campaign begins to gear up a question hangs in the air here: Whither the college vote in 2012?

The city’s streets don’t have many indications that a presidential election will be held in a few short months. There is nary a campaign sign to be found.

President Obama’s road to victory in 2008 came on a broad-based coalition with votes from across the demographic and geographic spectrum. He scored especially well with college-age voters. Those voters, like the students in Ann Arbor, were energized by the prospect of participating in a historic election. They worked hard for Obama and gave him huge support.

Obama’s margin of victory in Patchwork Nation’s 71 collegiate Campus and Careers counties (in dark green on the map below) was 18 percentage points. He captured an astounding 68 percent here in Washtenaw County. Nationally, Obama captured 53 percent of the vote and won by 7 percentage points.

That big college-town margin was in essence a cushion in 2008, but it might be crucial in a race most everyone expects to be closer, particularly when you look at some of the key states where those Campus and Careers counties are located: Ohio, Colorado, Virginia, Pennsylvania and Michigan.

But how replicable is that enthusiasm in 2012? Judging by the look and feel of Ann Arbor, there is work to be done.

“It’s still early, but I don’t feel there’s been the same level of (get out the vote campaigning) so far,” said Cynthia Wilbanks, vice president for government relations at the university. “The novelty of his ascent is gone. Obama’s the incumbent now. That’s different.”

At the Ann Arbor office of Organize for America, the Obama team’s headquarters in the area, things are just starting to gear up for reaching out to voters. Dana Sherry, a neighborhood team leader charged with reaching out to the city of Saline, one of the area’s more conservative parts, said the hard economic times have made people less focused on the campaign.

“A lot of them say they can’t even think about politics,” she said.

All in all, the voter registration numbers for heavily Democratic Washtenaw County are down from 2008. In November of that year, there were about 274,000 people registered in the county. As of June, there were roughly 264,500. That’s a difference of about 10,000, a substantial — but not huge — number.

Remember that this is a county with big voter turnover. Thousands of younger voters have passed through the county and moved on through graduation, and the big student registration campaigns have not begun in earnest yet. Many students will have different addresses in the fall than they did in the spring, and there was not a lot of reason for Democrats to register early in 2012, as there wasn’t a Democratic presidential primary this year.

Alexandra Brill, chair of the College Democrats at the University of Michigan, said there are major registration pushes planned for the fall: Diag Days, where they work to register students in the main quad; knocking on doors in the dormitories; and fall-break trips where the students fan out to other places they are needed. In truth, she said she’s just wading into the election and thinks the terrain may be easier than some think.

“Honestly, I don’t like elections,” Brill said. “I like policy, and I was a little discouraged about what he’s done. I thought that other students would be too, but they’re not. I don’t hear a lot about the issues from students. A lot of what I hear is change and hope.”

Yes, change and hope still play on college campuses, Brill said, or at least still at the University of Michigan. In fact, she said, she thinks the strongest selling point with college students may be giving Obama a Democratic Congress to help him accomplish his goals.

For months she said she had a listserve of names that seemed to be dead ends, but when she posted about getting those same people engaged and working on the campaign, she suddenly found a lot of old members “popped up” and announced interest.

What remains to be seen, however, is whether that “incredible” response manifests itself in the fall in votes and –perhaps just as important — in volunteer hours.

In 2008, Patchwork Nation spent time in Ann Arbor and found that months before the election, the county Democrats had essentially done all they could in Washtenaw County and had moved on elsewhere. That may have been a key ingredient in other wins for team Obama in Michigan counties like neighboring Jackson — a Service Worker Center county — and Monied ‘Burbs counties of Lenawee and Monroe. All those counties went for President George W. Bush in 2004.

Ann Arbor Mayor John Hieftje, who grew up in the area and knows it well, said 2012 may be different than 2008 when Election Day was marked by impromptu parades through the streets of his city that evening. “The anti-Bush sentiment of that time stoked the flames. The enthusiasm was there when 2008 began,” he said. “What you’re going to see in 2012 is the same vote, but not the same enthusiasm.”

For an incumbent president in a tough re-election fight, however, that might be an important difference — and not just in Michigan, but in key battleground states around the country.