Stakes Are High in Wisconsin for Santorum, Romney 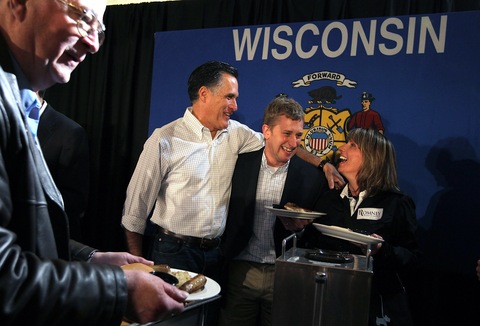 As former Massachusetts Gov. Mitt Romney has picked up momentum and endorsements over the last few weeks, his armor of inevitability has grown and the campaign of former Pennsylvania Sen. Rick Santorum has seemed to struggle.

Tuesday’s primary in Wisconsin is supposed to be the latest measure of Rom-mentum, and to some extent it will be — but maybe not as clearly as you think. Wisconsin’s results will show something about where the race stands, but you’ll have to look closely to see what it really means.

Until Romney’s recent surge, the assumption had been that Wisconsin would be good territory for Santorum because of the state’s blue-collar background. But that impression has been somewhat misguided.

When you look at the state through the Patchwork Nation geographic/demographic breakdown, it’s much better territory for Romney. In fact, when you look at Wisconsin closely, polls that show him with a sound lead shouldn’t be a surprise.

The question for Santorum will not be if he can win the state, but rather if he can hold onto the counties where he should do well.

Cast a cursory glance at the state of Wisconsin through Patchwork Nation’s 12 county types and there appears to be a lot of Santorum-friendly turf. There are a lot of the red Service Worker Center counties and a lot of light green Emptying Nest counties that have been very good to Santorum.

Despite what Wisconsin may look like, there are many more voters in the county types that have gone pretty reliably for Romney: the Industrial Metropolises (in black), the Monied Burbs (beige), Boom Towns (rust) and Campus and Careers (dark green) counties. Only 18 of Wisconsin’s 72 counties fall into those types, but they hold 61 percent of population.

In other words, from the very beginning, Wisconsin’s mix of demography and geography was better for Romney — and that was before he captured the momentum. Add that factor in and he’s likely set to have a very nice Tuesday night.

WHAT TO WATCH FOR

With the odds stacked against him and polls showing he’s trailing badly, what, if anything, can Santorum look to for comfort Tuesday night? He has to hope to hold his own in the places he should do well: the Emptying Nests and Service Worker Centers.

Those counties represent the real acid test for Santorum to see if his candidacy still has life. Up to now, voters in those places have been loyal and have largely stuck with him, carried in part by his social conservative message and populist zeal. Even in states that Romney has won — Michigan, Ohio and Illinois — Santorum has carried those counties.

The question is whether, at some point, the seeming inevitability of Romney’s nomination reaches a tipping point and voters in those counties who might not be predisposed to vote for him decide to fall in line behind him anyway. Wisconsin is the first state where that question will be explored fully, particularly in those red and light green counties on the Wisconsin map above.

If Santorum wins those counties again Tuesday night, it will mean this race has not changed as dramatically as some believe. Yes, Romney would still get the big win and more delegates and would be closer still to the nomination. But that split in the vote would indicate that large parts of the party are still not sold on Romney.

If, on the other hand, Romney begins to gather steam in those counties and splits the vote out of the Service Worker Centers or Emptying Nests, or even wins one or both types, it might be seen as a sign that the GOP is closing ranks after a hard-fought primary season.

The Romney team would certainly like to put the intra-party rancor of 2012 behind them. Those counties in Wisconsin will be a good indication of how close they are to doing that.