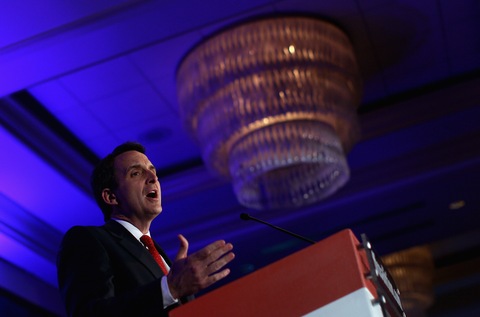 Tim Pawlenty was once seen as potentially the biggest threat to Mitt Romney’s quest for the Republican presidential nomination.

Today, the former governor of Minnesota has become Romney’s most high-profile endorser to date.

“Alone among the contenders, he possesses the unique qualifications to confront and master our severe economic predicament,” Pawlenty wrote in a letter Monday to Romney supporters. “His abiding faith in our country’s exceptional historical position as a beacon of freedom will make him the most important leader in a world that depends upon a strong America to stay at peace.”

“He believes in the bedrock conservative ideals of limited government and free enterprise. He will stand up for America’s allies when they are threatened, with fortitude. And he will face down our adversaries. He is a formidable person, and he will certainly be a formidable president. Our allies can count on it, and our enemies should expect it,” Pawlenty added.

He first announced his endorsement on Monday morning’s “Fox and Friends.”

“It is an honor to have Governor Pawlenty’s support,” Romney said in a statement naming Pawlenty a national co-chair of his campaign. “Tim will be a trusted adviser as I move forward with my campaign. Tim has always been an advocate for lower taxes, reduced spending, and an environment where jobs can be created. It is an honor to have him serve as Co-Chair to my campaign for the presidency.”

A Pawlenty endorsement is not likely to add many votes to Romney’s column that didn’t already exist. It’s also not likely to flood Romney’s campaign with tons of money from Pawlenty donors of which there were few if you look at the former candidate’s campaign balance sheet.

However, the endorsement, timed to Monday’s debate so that it’s sure to garner lots of attention, provides some important optics at a critical moment for Romney’s campaign.

Coming off the heels of his most impressive debate performance, aided by an uneven performance by front-runner Rick Perry, the former Massachusetts governor and his campaign have remained aggressively on offense for the better part of the last week. The Pawlenty endorsement seeks to add some free media momentum to the idea that Romney isn’t going to let Perry simply walk into the nomination without a real (and likely bruising) fight.

The Pawlenty endorsement’s main message to Republicans is: Don’t write Romney off. And, for a clear contrast, take that from a guy who surveyed the electoral landscape more closely than anyone and determined that he needed to write himself off because there was no foreseeable path to victory.

For Pawlenty’s part, he steered clear directly criticizing Perry in the endorsement but made a strategic decision to make his biggest impact soon after his departure from the race, rather than wait until just before the voting in Iowa and New Hampshire begins when he might be seen as so far removed from the conversation and garner little attention.

Despite some efforts at wooing the Tea Party element of the GOP, Pawlenty firmly lands in the “establishment” camp with his backing of Romney, and his endorsement will likely further develop the establishment vs. Tea Party meme being born out in the Perry vs. Romney battle.

Set your stopwatches to see how long into Monday night’s debate it takes Romney to reference Pawlenty’s support.