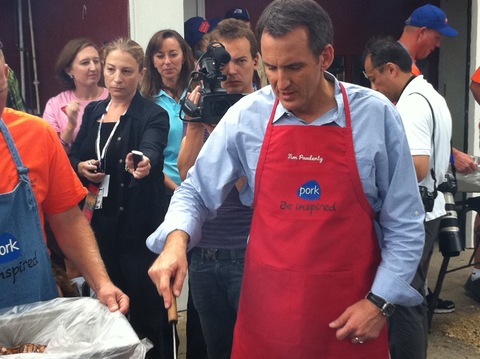 Tim Pawlenty visited the Iowa State Fair on Friday, the day before a poor third place showing at the state’s straw poll. Photo by David Chalian.

Former Minnesota Gov. Tim Pawlenty announced Sunday he is ending his campaign for the White House.

“I wish it would have been different, but obviously the pathway forward for me doesn’t exist so we are going to end the campaign,” Pawlenty told guest host Jake Tapper on ABC News’ “This Week with Christiane Amanpour.”

Pawlenty said that his campaign for the GOP presidential nomination “needed to get some lift” out of Saturday’s straw poll in Ames, Iowa, and his distant third place showing behind Minnesota Rep. Michele Bachmann and Texas Rep. Ron Paul failed to do that.

The Minnesotan refrained from endorsing one of his Republican rivals, but said that he will likely make an endorsement later in the campaign.

Bachmann edged out Paul by a margin of less than one percent. Bachmann won 4,823 votes of the nearly 17,000 cast compared to Paul’s 4,671 votes. Both candidates more than doubled Pawlenty’s third place take of 2,293 votes.

Pawlenty was keenly aware he had a lot riding on Saturday’s straw poll. At a debate in Ames on Thursday night, Pawlenty drew a sharp contrast between his record and Bachmann’s record, but the feisty performance did little to dent her ascendant campaign.

Pawlenty has been traveling the country attempting to put together a network of donors and key early state supporters in Iowa, New Hampshire, and South Carolina for the better part of the last two years. He was attempting to position himself as the clear alternative to frontrunner Mitt Romney, but the Tea Party energy driving the enthusiasm inside the base of the Republican Party appears to be seeking something other than “Minnesota Nice.”

With Pawlenty out of the race, Bachmann and Texas Gov. Rick Perry will begin what may prove to be a two-way battle in Iowa to become the alternative to Romney when they address the county Republican organization in Waterloo, Iowa, on Sunday evening.

As for the former Minnesota governor, he is going to help move his daughter to college this week.

Ask David Chalian your questions about the 2012 race. For more of our politics coverage, see our politics page.