A major part of a politician’s daily life has always been the ubiquitous photo-op, and besides kissing babies, nothing may be used more than animals to try to highlight the candidate’s softer, more human side to the American public.

Yet, as with everything in politics, animal instinct has its perils.

Republican presidential hopeful Mitt Romney has been dogged this election cycle by a story that he once drove to Canada with his dog Seamus strapped to the roof of the family car — something New York Times columnist Gail Collins makes a habit of mentioning every time she writes about Romney. 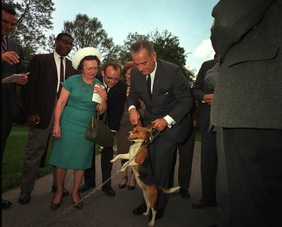 President Lyndon Johnson faced similar backlash from animal lovers in the 1960s after a photo printed in LIFE Magazine showed him holding up his pet beagle by the ears.

From President Bill Clinton’s walk with Buddy after admitting to an improper relationship with intern Monica Lewinsky to current first pet Bo playing in the snow — the NewsHour dug through the archives to find some of the most memorable photos of politicians with animals.

If you know of others that we have missed please share below.