Gwen’s Take: Lines in the Sand

Standing at the White House podium on Wednesday after members of the House Republican caucus concluded their meeting with the president about the budget, press secretary Jay Carney described the exchange to assembled reporters.

“There was no line in the sand,” he declared. (Translation: no one got up and stomped from the room, but no agreement was reached either.) 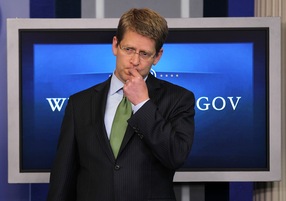 Drawing lines in the sand is a time-honored Washington tradition. Knowing where boundaries are — and that they can be wiped clean with sufficient negotiation — allows everyone to know where the other stands.

Then there are those political figures who have little use for that sort of clarity. At the same moment Carney was speaking at the White House, Sarah Palin – trailed by an unruly mob of reporters, camera people and astonished tourists – was guiding her daughter Piper through the scrum to visit the Statue of Liberty. There was not a line nor a grain of sand to be found.

And there you have the story of Sarah Palin. There are no lines. No rules. If I had not sat yards away from her on a debate stage as she represented her party as its 2008 vice presidential nominee, I would take her for being just as anti-establishment as she claims. 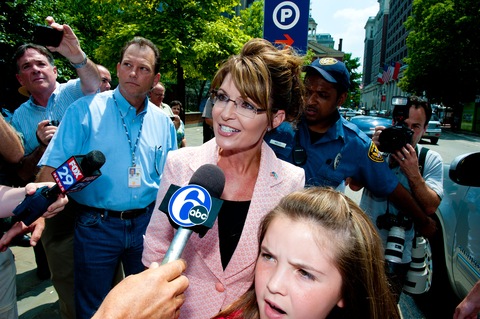 Trouble is, anyone who thinks they want to be president of the most powerful country in the world has to have some taste for the establishment. But at this point in the process, and in a surly political year, it hardly helps to publicly embrace that part of formula.

Witness Mitt Romney’s announcement the following day in New Hampshire. It had the handmade signs, the flags, the pretty clapboard houses and a cheering crowd. As supporters waited for the former Massachusetts governor to arrive and make his intentions official, the deejay played the 1970s Orleans tune “Still the One.”

He kept his focus on his main political target: the Democratic president. “Barack Obama has failed America,” he said, to cheers. Tim Pawlenty, the former Minnesota governor who is also running for President, has used the same approach: behave like a nominee and save attacks on fellow Republicans for later.

But Palin, who no one can accuse of pulling her punches when it comes to the president, is not playing by those rules.

Arriving in New Hampshire for a clambake on the exact same day that Romney chose for his well-publicized announcement, the former Alaska governor decided that would be the perfect moment to attack the health care plan Romney championed when he was governor of Massachusetts.

“[E]ven on a state level and even a local level, mandates coming from a governing body, it’s tough for a lot of us independent Americans to accept,” she told reporters. “Because we have great faith in the private sectors and our own families, and our own businessmen and women making decisions for ourselves.”

Palin said it was just a coincidence that she happened to land in tiny New Hampshire on the day of the Romney announcement and she would never have come if she thought he was offended. For the record, he said he was not.

But whether or not she is trying to annoy other Republican aspirants intentionally, Palin is giving a clinic on how to occupy center stage without having to be held accountable to anyone (except perhaps for her visibly unhappy little daughter, who accompanied her mother everywhere).

It must astonish veteran politicians who spend their days dialing for campaign dollars and their nights on the rubber chicken circuit to see the Palin parade.

And it must frustrate elected lawmakers who next week will retreat again with Vice President Joe Biden behind closed doors at Blair House to wrestle over deficit negotiations. They have to know their efforts — at actual governing — can never hope to be as interesting as the parades rolling by outside.

But if they are looking for lines in the sand, they better hope Palin’s bus is heading for the beach.