In swing state Colorado, elections typically are decided in three suburban counties. That fact didn’t escape the Romney and Obama campaigns, which spent plenty of time and money reaching out to those in Arapahoe, Larimer and Jefferson counties — and, indeed, all across the land.

NewsHour spoke to voters outside their polling location in Arapahoe County, Colo., about their choices, their reasons for voting, their disdain for political ads, and their thoughts on Election Day.

In Colorado, women in these suburban counties are a key voting bloc, likely to be one of the final influencers on whether the state’s nine electoral votes go to President Obama or Mitt Romney.

In Lakewood, west of Denver in Jefferson County, finding the time to even vote was one of many challenges for single mother Amber Tuffield.

Tuffield works two jobs — one as a secretary, the other bartending — and worries most about having decent health care and ensuring her children get a solid education.

But two things in particular stuck with her this Election Day: Mitt Romney’s secretly recorded assertion that 47 percent of Americans see themselves as “victims,” and his suggestion that students should borrow money from their parents if they can’t afford college.

It all left her questioning whether the Republican could really relate to people like her, and prompted this registered independent to vote for Barack Obama instead.

“Looking at both of them, I’m more comfortable with the known than the unknown,” said Tuffield, 44. 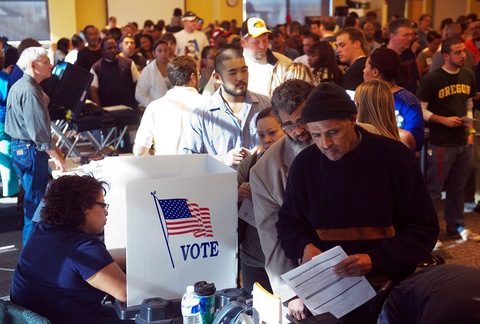 Arapahoe County voters overwhelmed the Arapahoe Centrepoint Plaza offices to vote on Election Day. The line in the background was to get to the registration table with waits reportedly over 2 hours long to cast a vote. Photo by Cyrus McCrimmon/The Denver Post.

In Arapahoe County, Republican precinct leader Lori Horn spent her day coordinating poll observers. Like Tuffield, she worries about her children’s future, but believes Romney and his economic plan are the best bet for her family.

“I have a daughter on the precipice of college and a career,” said the 50-year-old mother of two. “I have to make this a priority.”

The Associated Press contributed to this report.