Most Americans disapprove of GOP’s treatment of health care

A majority of Americans are unhappy with the Republicans’ efforts to overhaul the nation’s health care system, a troubling sign for the party as it struggles to pass a health care bill in Congress.

Two-thirds of Americans disagree with how Republicans in Congress have handled the health care debate so far, while a fifth of Americans approve and another one-seventh are unsure. That’s according to a new poll produced in partnership with the PBS NewsHour, NPR and the Marist College Institute for Public Opinion. The poll of 1,205 U.S. adults was conducted June 21-25 using landlines and mobile phones. 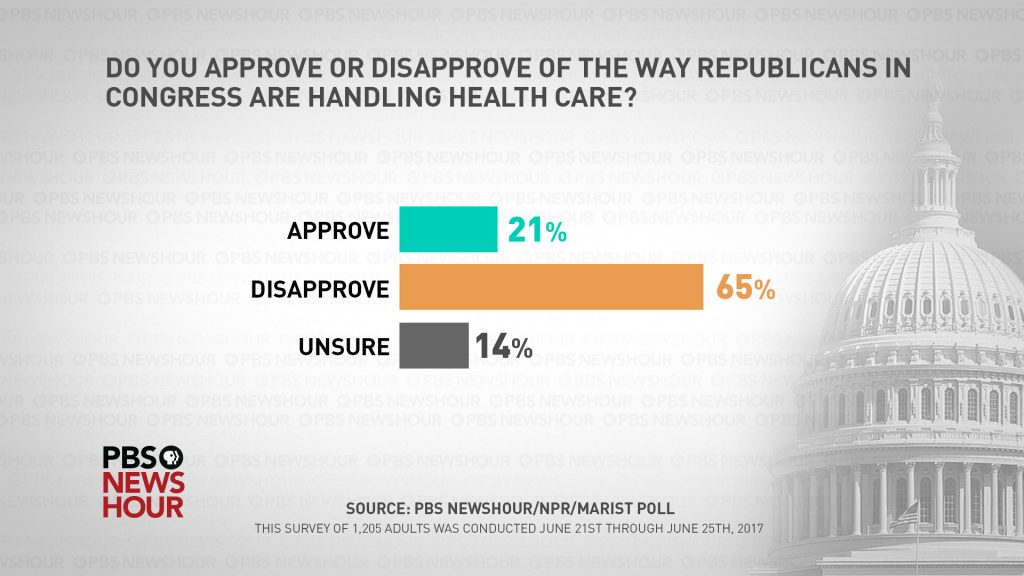 A third of Republicans disapprove of how their own party has managed the debate around health care.

Interestingly, a third of Republicans disapprove of how their own party has managed the debate around health care while nearly nine out of 10 Democrats and seven out of 10 who identify as independent oppose how the subject has been handled in Congress.

In March, nearly half of U.S. adults — 46 percent — said Congress should change the Affordable Care Act so “it does more,” according to Marist polling data. A quarter of Americans said they wanted to repeal Obamacare completely. That response remained largely unchanged this June, despite the ongoing public debate around the issue.

When asked who bears the blame if Obamacare goes unchanged, a third of Americans pointed their fingers at Congressional Republicans, while an additional quarter said Democrats stood in the way. One out of seven U.S. adults said Trump should receive the most blame. 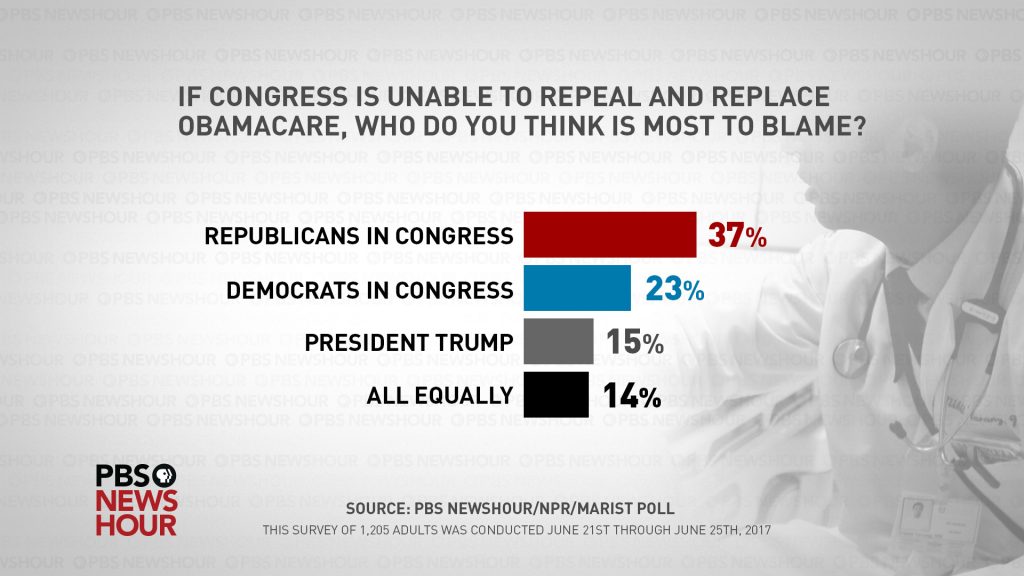 READ MORE: Did Obamacare help or hurt you?

This is just one of several national policy debates the Trump administration is grappling with, just 158 days after President Donald Trump was inaugurated. While Congress and the country debate the future of health care, the United States must also manage fractured relations between the U.S. and Russia, the administration’s controversial travel ban and the nation’s decision to withdraw from a major international climate agreement.

On the nation’s recent withdrawal from the Paris climate agreement, half of Americans do not support President Trump’s decision, while fewer than a third said they supported his decision and an eighth of Americans were unsure about how they felt.

The poll also touched on voter attitudes on the president’s leadership style.

Most Americans think President Trump should delete his Twitter account. Sixty-nine percent of U.S. adults said the president’s tweeting is “reckless and distracting.” This question posed a rare opportunity in which Americans, no matter their politics, said Trump should leave Twitter alone. Nearly nine out of 10 Democrats expressed negative opinions about Trump’s tweeting, along with four out of 10 Republicans and seven out of 10 people who identify as independents.

An issue that has also drawn repeated criticism of the Trump administration is the president’s business dealings. When asked about this, a third of U.S. adults said they thought Trump had broken the law, while more than one-quarter of Americans — 28 percent — said he has made unethical decisions, but not illegal ones. Nearly one-third of adults said Trump has done nothing wrong.

The country was divided over whether or not Trump is fulfilling his campaign promises. Among all U.S. adults, 45 percent of respondents said Trump has not made good on pledges he made prior to the election.

While the country wrangles over these policy questions, the percentage of Americans who think the nation is on the right path continues to slide. In June, 31 percent of U.S. adults said the country was going in the right direction.

Left: U.S. Speaker of the House Paul Ryan speaks to the media about the American Health Care Act at the Capitol in Washington, D.C., U.S. March 15, 2017. Photo by REUTERS/Aaron P. Bernstein